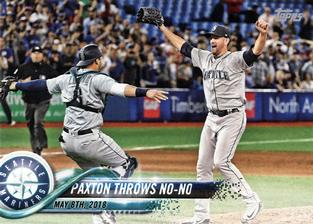 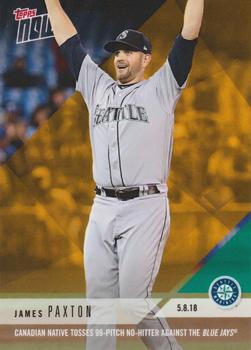 James Paxton’s reputation for being calm, cool, and collected was cemented just prior to the Minnesota Twins’ 2018 home opener. During the national anthem, a falconry-trained bald eagle mistook Paxton for one of his handlers and flew directly at him. After initially ducking to protect his face, the 29-year-old native of Ladner, British Columbia, calmly straightened up to give the massive bird an opportunity to perch on his right shoulder. The disoriented eagle briefly landed on him, before slowly sliding down Paxton’s back. It was quickly retrieved by a handler. The Seattle pitcher had wisely sized up the situation. “I figured I’m not going to outrun an eagle, so we might as well just see what happens,” he explained.1 Video of the avian encounter went viral on the internet.2

A month later, Paxton opened a seven-game Mariners road trip by taking to the hill in Toronto, a city known more for seagulls than bald eagles.3 The Blue Jays countered with a struggling Marcus Stroman (0-4, 7.52), who was still in search of his first victory of the season.4 A modest midweek crowd of 20,513 fans, who included Paxton’s parents, filed into Rogers Centre to watch the two third-place clubs do battle.

Paxton was coming off a dominant performance against Oakland in his previous start. His four-seam fastball had averaged more than 96 miles per hour that night, and he relied on it heavily, striking out 16 batters in seven shutout innings. Those 16 strikeouts were the most ever recorded by a Canadian pitcher in a big-league game, topping the previous record of 15 punchouts by Erik Bedard.5

Paxton picked up right where he left off against the A’s. He struck out the first two Blue Jays hitters in the bottom of the first inning. The third batter, Yangervis Solarte, hit a sinking liner into center field, but he was robbed of a hit when Dee Gordon made a beautiful diving catch.6

Paxton breezed through a one-two-three bottom of the second inning. In the top of the third, Seattle scored a pair of runs on Robinson Canó’s RBI groundout and a bloop RBI single by Nelson Cruz.

Paxton lost his rhythm when he returned to the mound in the bottom of the third. He walked the first hitter, Kendrys Morales, on four pitches.7 After Lourdes Gurriel Jr. hit a fly ball to deep right-center field that was caught by Gordon at the wall, Paxton issued a five-pitch walk to Anthony Alford. Although two of the pitches called balls by the home-plate umpire were strikes according to the Pitch F/X system, Paxton showed no signs of frustration.8 Pitching coach Mel Stottlemyre Jr. made a visit to the mound to check up on him anyway. Paxton’s right foot had been slipping on his delivery, so he dug out his landing spot a bit more.9 He bounced back by retiring the next two batters to escape the inning unscathed.

The Mariners extended their lead to 4-0 in the top of the fourth inning when catcher Mike Zunino hit an opposite-field, two-run home run off Stroman.

After striking out Solarte on a nasty knuckle curve to open the bottom of the fourth, Paxton issued a four-pitch walk to Justin Smoak. He was the last Blue Jays baserunner of the game. The next batter, Kevin Pillar, scalded a groundball to third baseman Kyle Seager for a nifty 5-4-3 inning-ending double play.

Paxton regained his rhythm and cruised into the bottom of the seventh inning with the no-hitter still intact. His steady pace helped keep the Seattle defenders on their toes.10 With two out and nobody on in the seventh, Pillar smashed a groundball down the third-base line. Seager dived to his right, snagged it, got up, and fired a no-look throw to first base on one hop to nail the speedy Pillar. “That’s when I said to myself, ‘Oh man, I have to get this thing done now,’” Paxton remembered.11

The Jays came close to breaking up the no-hitter twice in the eighth inning. Paxton’s countryman Russell Martin led off with a long fly ball to the left-center-field wall that was tracked down on a nice running catch by Ben Gamel. The very next pitch was the hardest-hit ball Paxton surrendered in the game, a 111.6-MPH laser beam to center field off the bat of Morales. The line drive was hit directly at Gordon, who battled the lights and made the tricky grab. After Paxton struck out Gurriel to end the inning, the Toronto fans responded by cheering the Canadian hurler. It was quite the change from the middle innings when many in the crowd told him in no uncertain terms that he was going to blow it.12

Morales’s scorching line drive was off a knuckle curve, which convinced Zunino to rely on Paxton’s best pitch the rest of the way.13 The Seattle ace emptied the tank in the ninth, needing only seven pitches − all four-seam fastballs − to retire the side. When the dangerous Josh Donaldson came to the plate with two out and nobody on base, most of the fans were standing and cheering. “I was like, ‘I’m going to bring my best stuff here. I’m going to rear back and throw it is as hard as I can,’” Paxton recalled. His three pitches to the Toronto third baseman were the fastest he threw all night: 98.3, 99.5, and 99.0 miles per hour. On Paxton’s 99th pitch of the game, Donaldson smacked a hard groundball to Seager, and the Seattle third baseman fielded the ball cleanly and tossed it across the diamond to clinch the no-hitter.14

Paxton was mobbed by his teammates on the mound. Once the celebrations died down, the 6-foot-4 southpaw waved to the crowd and pointed to the large tattoo of a maple leaf15 on his right forearm. The fans showered their native son with more applause. “I really respect their cheers after the game and supporting me,” Paxton said. “Being Canadian, that was very special. I just wanted to show them that I heard them, and I was very grateful.”16

The Blue Jays came into the game leading the American League in home runs. Paxton completely shut them down, retiring the last 16 hitters in order. His no-hitter was the sixth in Mariners history and the first thrown on the road.17 Paxton also became the first American League pitcher since 1991 to register a 16-strikeout game and a no-no in the same season. Nolan Ryan accomplished both feats in a May 1, 1991, game against none other than the Blue Jays.

It was only the second no-hitter thrown by a Canadian in big-league history. The first was tossed almost 73 years earlier by 24-year-old Toronto native Dick Fowler. On September 9, 1945, Fowler tossed a rare walk-off no-hitter for the Philadelphia Athletics at Shibe Park shortly after being discharged from the Canadian Army. Amazingly, it was his first major-league start in almost three years. As was the case with Fowler, Paxton’s no-hitter was also his first career shutout.18

The no-hitter in Toronto completed a unique trifecta: It was the third major-league no-hitter of 2018 and each one was thrown in a different country.19 Walker Buehler and three Dodgers relievers had no-hit the Padres just four days earlier in Monterrey, Mexico.20 Less than two weeks before that, Sean Manaea had no-hit the Red Sox in Oakland.

Aside from his no-hitter against the Blue Jays, Paxton had his biggest day of the 2018 season on July 1, Canada Day. That afternoon he earned his eighth victory of the season by giving up only two hits in eight shutout innings and striking out 11 Royals. With the game being played in Seattle, only 130 miles from his hometown, a large contingent of family and friends looked on. Manager Scott Servais referred to it as “Pax Day,” as the first 20,000 fans to enter the ballpark were given a Paxton bobblehead.21 Of course, it came complete with a bald eagle perched on his right shoulder.

In addition to the sources cited in the Notes, the author consulted Baseball-Reference.com, Retrosheet.org, and the Statcast data on BaseballSavant.MLB.com.

2 Video of Paxton’s encounter with the eagle can be found at youtube.com/watch?v=Hxnx_VbN2A8.

3 The highest-profile seagull incident at a Toronto ballpark took place during the 1983 game in which Dave Winfield’s throw killed a seagull at Exhibition Stadium. After the game, police charged Winfield with the crime of causing “unnecessary suffering of an animal.”

4 Stroman was placed on the disabled list with shoulder fatigue after this start. However, both Stroman and general manager Ross Atkins believed his struggles were as much mental as physical. Stroman came off the disabled list on June 23, 2018. Rob Longley, “Struggling Jays Starter Marcus Stroman Headed to Disabled List,” Toronto Sun, May 12, 2018, torontosun.com/sports/baseball/toronto-blue-jays/struggling-jays-starter-marcus-stroman-headed-to-disabled-list, accessed June 29, 2020.

5 Erik Bedard struck out 15 batters for the Baltimore Orioles in a July 7, 2007, game against the Texas Rangers. Paxton’s single-game Canadian strikeout record still stood as of the end of the 2020 season.

6 Media reports of the game focused on the defensive gem by Kyle Seager in the seventh inning. However, the importance of Gordon’s diving catch in the first inning should not be overlooked.

7 Two of the four balls were borderline strikes.

10 The game was completed in a brisk 2 hours and 19 minutes. The average nine-inning game in 2018 lasted exactly three hours.

14 According to the Statcast data on the Baseball Savant web site, Paxton threw 63 four-seam fastballs, 23 knuckle curves, and 13 cutters (cut fastballs) in the game. His knuckle curve had a whiff rate of 38.5 percent, and 15 of the 23 were thrown for strikes. His knuckle curve was much more effective in the no-hitter than it had been during his 16-strikeout performance on May 2, 2018.

15 The maple leaf is the national symbol of Canada, hence the 6-foot-4 Paxton’s nickname.

17 The five previous Seattle no-hitters were thrown by Randy Johnson on June 2, 1990, Chris Bosio on April 22, 1993, Kevin Millwood and five relievers on June 8, 2012, Félix Hernández on August 15, 2012, and Hisashi Iwakuma on August 12, 2015. The five relievers who combined with Millwood on the 2012 no-hitter were Charlie Furbush, Stephen Pryor, Lucas Luetge, Brandon League, and Tom Wilhelmsen.

18 Paxton’s no-hitter was the first complete game of his career. Since he threw only 99 pitches, it was also the first “Maddux” of his career. A Maddux is a start in which a pitcher throws a complete-game shutout on fewer than 100 pitches. The term is named after Hall of Famer Greg Maddux.

19 No other major-league no-hitters were thrown in 2018 after Paxton’s gem.

20 Tony Cingrani, Yimi García, and Adam Liberatore combined with Walker Buehler to no-hit the Padres on May 4, 2018.