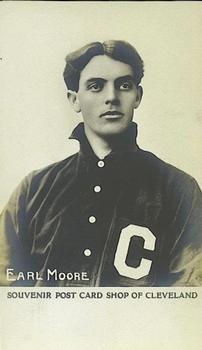 On May 7, 1901, three men pulled off a brazen heist on Euclid Avenue in Cleveland, robbing a jewelry display case owned by Arnstine Bros. & Mier in broad daylight. The Cleveland Plain Dealer declared it the boldest crime in years.1

As two men engaged in conversation to block the view of the display, a third man jimmied the lock and stole $100 worth of watches that were inside.2 Bystanders initially thought the men were employees changing the display, so after the crime was committed, the criminals were able to split off and easily escape capture by blending in with other bustling pedestrians.

Two days later, some observers claimed another midday heist took place in Cleveland – that time at League Park when umpiring decisions were questioned and sizzling Cleveland Blues rookie Earl Moore just missed firing the first no-hitter in American League history and his chance to become the “greatest drawing card of the team.”3

Moore set down Chicago White Stockings hitters in order in eight of the first nine innings, but despite his not allowing a hit, the game was deadlocked at 2-2 – forcing an AL game into extra innings for just the second time in the new major league’s first three weeks of competition.4 Chicago finally got some clean hits and two more runs in the 10th, but not before the Blues decried another umpiring decision as the middle game of a three-game series slipped away.

“ROBBED OF FAME AND GAME,” cried the Plain Dealer headline after the Blues’ 4-2 loss in front of a sparse Thursday crowd of only about 500 fans, who filed into the park despite an impending storm.5

Moore, the electric 23-year-old hurler from Pickerington, Ohio, was as exciting a pitcher as Cleveland had during its inaugural season.6 After Moore won his home debut against the Milwaukee Brewers on May 1, the Plain Dealer wrote that the former Interstate League standout with Dayton threw a fastball with speed “almost up to the quality possessed by Cy Young in his best days.”7

From there, Moore showed “speed, nerve, and good judgment” on May 4 in an 11-4 win against the Detroit Tigers, the early leaders in the standings.8 He allowed just three hits over the first eight innings before yielding three runs on four hits in the bottom of the ninth. But Moore never lost focus and induced Kid Elberfeld into a fly out to end the game.9

Moore parlayed the momentum from halting that last-inning rally into the game against the White Stockings to deliver his most dominating performance yet.

Cleveland’s Ollie Pickering and Jack McCarthy led off the game with back-to-back walks, but the Blues didn’t score until the third. Bob Wood opened that frame with a bunt single up the third-base line, and after Moore struck out trying to sacrifice, Pickering laced a single into left. McCarthy popped up on the infield, but Frank Genins lined to shortstop Frank Shugart, who couldn’t handle it cleanly, loading the bases.

Candy LaChance knocked the next pitch into right field for a two-run single and a 2-0 lead.

The Blues, however, were unable to maintain an early advantage for the fourth time in 15 games. Chicago tied the score in the fourth because of “dirty robbery, assisted by the only misplays of the game.”10

William Hoy drew a leadoff walk, with the fourth ball call from Jack Sheridan raising the ire of Cleveland’s players.

Fielder Jones followed with a sharp grounder to second baseman Erve Beck, who fumbled the ball a bit before throwing to LaChance at first. Base umpire Al Mannassau, positioned near second base, called Jones safe – a decision that was questioned by reports from both Cleveland and Chicago.

“If Manasseau [sic] had had a fortune bet on the game he could have done no more to influence the result,” the Plain Dealer wrote. “… His wretched work, which has been in evidence ever since he came here, is attributed to nothing but absolute incompetency.”11

Sam Mertes moved Hoy to third with a sacrifice, but Hoy was retired in a rundown between third and home after Frank Isbell hit a grounder to first baseman Bill Bradley. Jones reached third on that play.

When Isbell attempted a steal of second, the White Stockings found themselves tied on the scoreboard. Instead of throwing down to second base to try to nab the speedy Isbell,12 Wood made a short throw to Moore at the mound in case Chicago was planning a double steal with Jones at third.

Moore, in turn, threw to third to catch Jones off the bag, but the ball sailed into the bleachers, which allowed both Jones and Isbell to score. So while there was much said and written about the umpiring decision on the play that led up to the jam, it was Moore’s errant throw that truly spoiled the afternoon.

After the fourth, it was a “royal battle”13 between Moore and Chicago starter Jack Katoll, who improved to 2-1 with a 1.93 ERA after allowing two runs on six hits and three walks, avenging a loss to Cleveland on April 27.14 After Pickering led off with a double for the Blues in the bottom of the fifth, Katoll didn’t allow another runner until the 10th.

In the top of the 10th, rain began to fall over League Park. Mertes poked a single by shortstop Danny Shay,15 and after Isbell flied out, Fred Hartman added a clean single to center to put runners on the corners. Shugart hit a slow roller to Shay, whose throw home did not beat Mertes to the plate, and Herm McFarland hit a grounder to second for what should have been an inning-ending double play. Shugart ran out of the baseline but was not called out by Mannassau, which allowed Hartman to score.

The Blues tried to stage a comeback after Wood led off the 10th with a single, but Katoll recorded three fly outs to put the game away and allow the teams to escape the worsening elements – which likely helped shield Mannassau from a crowd that was displeased with his performance.16

Chicago’s win moved the White Stockings to 10-4 and back into a tie for first in the standings for the third time on the season. They remained atop the standings or within striking distance throughout May and June before taking over the lead for good on July 10 to claim the first AL pennant.17 For Cleveland, the loss dropped the Blues to 4-10 and was the fourth straight in what became a 11-game losing skid.18

Moore continued to be a bright spot for the Blues, who closed the season seventh in the standings at 54-82. Moore ended the season with a 16-14 record, a team-low 2.90 ERA (seventh in the AL), 99 strikeouts, and 4 shutouts.19 He committed five more errors over the remainder of the season, but none proved as costly as his throw into the bleachers.

2 The Plain Dealer reported that the case sometimes displayed diamonds valued up to $25,000, so the company was lucky to be out only $100 in watches.

4 The first was a 10-inning affair between the Boston Americans and Philadelphia Athletics on April 30.

6 Later in the season, Moore added Cleveland’s first shutout in a 6-0 win over the Washington Senators on June 12, outdueled Cy Young in a 10-inning, 2-1 victory over the Boston Americans on July 19, and pitched a one-hitter in a 4-0 win over the White Stockings in the first game of a doubleheader on August 13 – which marked the first time Chicago was blanked in 1901. Moore wasn’t the only pitcher to excite fans, though. Pete Dowling fired the American League’s first no-hitter on June 30 in a 7-0 win over the Milwaukee Brewers and added a one-hitter against the Brewers in another 7-0 win on August 2, and Bill Cristall fired a shutout in his debut in a 4-0 win over the Americans in the second game of a doubleheader on September 3 – which was the only victory of his brief career.

15 Shay was the second failed shortstop for Cleveland in 1901. Season-opening starter Bill Hallman was dispatched after committing five errors in five games, and Shay’s tenure lasted only the next 19 games, in which he committed 10 errors and hit .237. On May 22 Frank Scheibeck took over at shortstop and stuck for the rest of the season. He hit just .213 and committed 51 errors in 93 games, but his rate of an error every 1.8 games was less than those of several other AL starting shortstops, among them Baltimore’s Bill Keister (every 1.1 games), Chicago’s Frank Shugart (1.5), and Detroit’s Kid Elberfeld (1.6).

16 Massannau, who toiled in the minors for seven years as a player, umpired 96 games for the AL in 1901. He had previously served as a National League umpire in 1899 but did not umpire games in the majors again until 1914, when he watched over 109 games in the Federal League.

17 The White Stockings were champions of the American League in 1900, but the league had not claimed major-league status at that time.

19 Boston’s Cy Young and Chicago’s Clark Griffith, who each had five shutouts, were the only AL pitchers with more shutouts than Moore. Six National League pitchers had five or more shutouts.