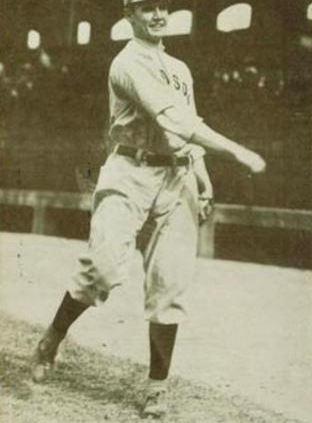 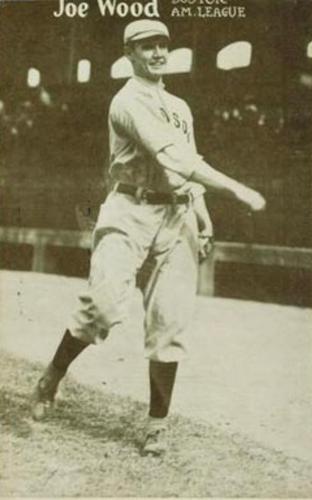 It was Smoky Joe Wood vs. Jeff Tesreau once more in Game Four of the 1912 World Series, and once more Wood came out on top. Tesreau got off to a shaky start in the top of the first, when Harry Hooper singled through the box and catcher Chief Meyers pounced on Steve Yerkes’ bunt but threw wildly to second.1 The threat ended when Tris Speaker hit into a double play and Duffy Lewis grounded out.

The Giants got a one-out single from Larry Doyle in the bottom of the inning. Fred Snodgrass’s grounder forced him at second, and then Wood picked Snodgrass off to end the inning.

Tesreau started off shakily again in the second frame. He surrendered Larry Gardner’s first-pitch triple to deep right-center – and then threw a wild pitch by Meyers, allowing Gardner to grab a quick run for the Red Sox.

Fred Merkle responded in the Giants’ half of the inning with a hit and a stolen base after one out. He moved to third base on Buck Herzog’s grounder to second base, but was stranded there when Meyers flied out to left.

Boston got the first two men aboard in the third on Wood’s single and Hooper’s walk, but three groundballs ended that threat. Tesreau fielded the first one, throwing out Wood at third base.

A routine grounder and two strikeouts made for a quick bottom of the third for New York.

In the fourth, the Red Sox got their leadoff man on board for the fourth inning in a row – this time Gardner via a base on balls. He was forced when Jake Stahl bunted a little too hard back to Tesreau, but Stahl stole second and moved to third when Heinie Wagner grounded to Merkle at first base.

Hick Cady – who was denied a game-winning hit in Game Three by Josh Devore’s spectacular game-ending catch in right field – squeaked a single past shortstop Art Fletcher and into left field to score Stahl for a 2-0 Boston lead. Stahl’s tally proved to be the winning run, but there was drama yet to come in Game Four.

The Red Sox bats were pretty much silenced for the fifth and sixth innings but for a single by Yerkes. A great one-handed catch by right fielder Red Murray robbed Hooper of a likely triple in the fifth.

Tesreau started a threat in the Giants’ sixth, lining a single to left field. Devore, playing left field after saving Game Three with his catch in right, followed with a single of his own – off Wood’s shin – and New York had runners on first and second with nobody out. But Doyle swung at the first pitch and popped up to third. Snodgrass grounded to second base and the middle runner was erased. Red Murray hit into a near carbon copy second-to-short force out to end the inning. It was still 2-0, Boston.

Wood was reasonably effective, but the Giants did collect nine hits, six of them after the fifth. He proved best in the pinches and may have had the Giants batters off in their timing; contemporary reports say that as the game progressed he relied much less on his smoking fastball and instead used his curve and change of pace most effectively. More than once in the Series, sportswriters commented on Heinie Wagner’s defensive prowess at shortstop. Hugh Fullerton wrote that in this game alone, Wagner “made two of the greatest stops of the season.”2

The Giants finally broke through in the seventh. With one out, third baseman Herzog singled. Fletcher doubled down the right-field line to drive in Herzog, cutting the deficit to one run.

After Meyers flied out for the second out, Giants manager John McGraw had Moose McCormick bat for Tesreau. It looked as though it had paid off when McCormick singled and Fletcher dashed toward home from second – but second baseman Yerkes knocked the ball down, gathered it in, and threw a bullet to Cady at the plate.

Fletcher “jumped into the air[,] came into the Boston man (Cady) feet first with his spikes two feet from the ground,” but Cady held on and made the tag to preserve Boston’s lead.3 McGraw’s call to send Fletcher home subjected the Giants manager to second-guessing, but in his column on October 15 he said he’d do it again in a two-out situation like that.4

The Giants again threatened to tie the game in the bottom of the inning when Wagner’s error and Murray’s single through the hole (vacated at short when Wagner moved to cover on the hit-and-run) put runners on first and third with two outs. But Smoky Joe struck out Merkle on three curveballs to turn the Giants away.

It was still a one-run game and Wood was hoping for an insurance run in the top of the ninth to give him a little breathing room. Gardner singled sharply to center field, and Stahl sacrificed perfectly to push him to second. Wagner walked, but Fletcher turned Cady’s grounder to short into a force at second, with Gardner taking third.

Now Wood batted with two on and two outs. He came through with a clutch hit: a single to the wall in the Polo Grounds’ exceptionally short right field. Gardner scored, and Wood had his insurance run. He carried a 3-1 lead into the bottom of the ninth.

Smoky Joe took the mound and closed out the Giants. Herzog flied out to Speaker in center field. Meyers lifted a foul popup to Cady. Fletcher popped up to Stahl at first base. The Red Sox had a 2-1 lead in the Series (there had been a tie in Game Two), and both teams hopped back on the train to head north to Massachusetts. Neither team had yet won a game at home.

The Giants, with nine hits, had one more than the Red Sox, but Wood had struck out eight and not walked a batter. He’d come through when needed. “How can we hit what we cannot see?” said Murray after striking out for the second time.6 Christy Mathewson offered praise but believed, as did his manager, that “I have not seen any other Boston pitcher who I think can beat us.”7

“I can assure you,” proclaimed McGraw after the game, “like John Paul Jones, we have just begun to fight. We are going to give them a battle every step of the way and, moreover, we expect to win.”8

The Globe’s Tim Murnane observed that though the game was played in New York, the “majority of those present seemed to favor the Boston men.”9 As had happened after Game One, some New York fans showed their displeasure at the defeat. After Game One, the automobiles of the Royal Rooters were “stoned and deluged with dirt by the urchins lined up along the streets and avenues.”10 After Game Four, “it was the automobiles occupied by the players that were bombarded and many of the occupants suffered from dirt being thrown.”11 Fortunately, there were no serious injuries despite “some of the oldest of the hoodlums being particularly good marksmen.”12 Buck O’Brien was hit in the face by a sharp stone that cut the skin. (O’Brien had a rough Series; he would be struck by one of his teammates in the aftermath of Game Six.) The Red Sox complained that New York’s finest stood by without intervening.

1 John Tortes Meyers, a Cahuilla Indian, could not avoid being saddled with the nickname “Chief” playing in this era. He was recognized as one of the best offensive catchers of the Deadball Era, retiring with a .291 batting average for his nine-year career.

5 Ames was a right-hander, 11-5 with a 2.46 ERA in 1912. In his 10th year with the Giants, he’d started 22 games during the regular season and relieved in 11 others. This was his only appearance in the 1912 World Series. He had started and lost Game Six of the 1911 World Series against the Philadelphia Athletics, giving up five runs (two earned) in four innings.