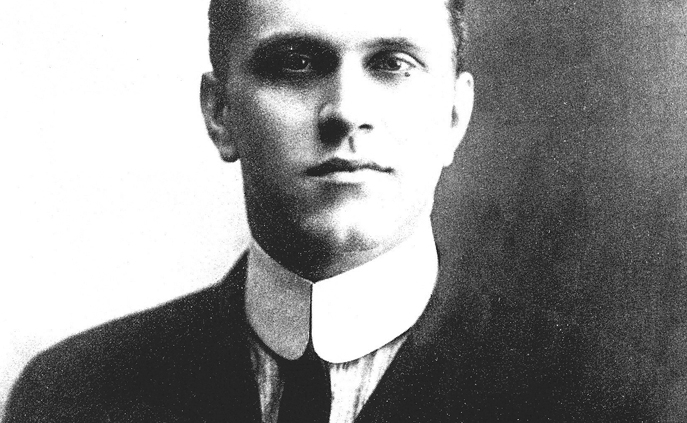 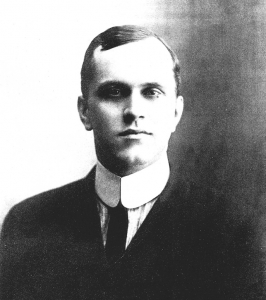 It was a dark, damp, foggy, gloomy day. Up until noontime, the playing of World Series Game Five was still in question. Down two games to one, Giants manager John McGraw had ace Christy Mathewson up his sleeve, at least even money — if not a sure bet — to tie the Series. Matty took the mound on only two days of rest after going the distance in Game Two’s 11-inning tie, as some observers speculated that the 12-year veteran’s career had peaked.1

Whatever worries might have existed, Mathewson pitched a great game. It seemed to take him just a while to settle in; he gave up two singles in the first and one in the second but pitched his way through to two scoreless innings. Outfielders Harry Hooper and Tris Speaker both singled in the first, but with one out, Duffy Lewis grounded to third baseman Buck Herzog, who got the lead runner. Larry Gardner struck out to end the inning. Mathewson pitched around Heinie Wagner’s single for a scoreless second.

Rookie Hugh Bedient was manager Jake Stahl’s selection. The winner of 20 games in 1912 (he’d been 20-9, with a 2.92 ERA), the 22-year-old “modest youth” was Stahl’s fourth starter, but he pitched an even better game than Christy Mathewson on this day.

Bedient, too, faced a little trouble in the cold weather, walking the leadoff batter in both the first and second innings, each time on four pitches. He issued his third — and final — walk of the game to Josh Devore in the third and also allowed a single to Mathewson in that inning. Yet no Giant got past second base in the early stages of the game and Bedient didn’t walk a man in the final six innings. He was consistently ahead in the count, throwing a lot of first-pitch strikes. Oddly for the era, neither team attempted to bunt or steal a base all game — even though the Red Sox of the day were sometimes known as the “Speed Boys.”

Harry Hooper tripled to the left-field corner to lead off the Red Sox third. The ball rolled between the stands of the temporary bleachers; Devore disappeared from sight before coming up with the ball fast enough to hold Hooper to three bases. Steve Yerkes swung at the first pitch and made it back-to-back triples with a drive to center field — the ball rolling to the fence, then bouncing off at an unexpected angle — to score Hooper.

Second baseman Larry Doyle went to field Tris Speaker’s grounder but, glancing up to assess his chances of holding Yerkes at third, lost track of the ball just long enough that it ended up in right field. As the New York Times put it, “Speaker’s hopping grounder whizzed its rampant course through Larry Doyle’s shoes.”2

Yerkes scored the second Red Sox run on what turned out to be New York’s lone error of the game, but Speaker was too aggressive in trying to reach second. He was thrown out, right fielder Red Murray to shortstop Art Fletcher. Both Lewis and Gardner subsequently grounded out. It was 2-0 for the Red Sox.

Beginning with Lewis’s and Gardner’s outs to end the fifth, Mathewson retired every Red Sox batter he faced for the remainder of the game — 17 in a row in total. Only two balls were hit beyond the infield: Hick Cady’s fly ball to center field in the fourth and Bedient’s fly to center in the eighth. Mathewson was masterful in a big game, but the two runs scored in the third inning proved one too many.

In the fourth, fifth, and sixth innings, Bedient was almost as dominant, allowing just one baserunner: Chief Meyers on a leadoff single in the fifth, after the New York catcher had fouled off six pitches.

First baseman Fred Merkle hit a ground-rule double to left field to start the seventh, the ball bouncing into the bleachers. It was only the third hit off Bedient in the game, and it was to be the last. Buck Herzog struck out. Meyers flied deep enough to Speaker in center that Tris had to go back to reel in the ball. (Speaker traditionally played a shallow center field, and set a still-standing career record for unassisted double plays by an outfielder, but fortunately for the Red Sox this time was playing deeper than usual.) Merkle tagged up and took third.

Moose McCormick batted for Fletcher, his fourth pinch-hit appearance of the Series. For the third time, it looked as if he might have made something happen. He reached base on shortstop Gardner’s error, and Merkle scored. Mathewson grounded out to end the inning, but it was now a one-run game: Boston 2, New York 1.

And was to remain so. Bedient pitched a perfect eighth and ninth to secure the win, with only Merkle’s deep fly ball in the ninth escaping the infield. Speaker made a running catch on the New York first baseman’s drive, close to the fence in left-center.

The Red Sox starter had thrown a three-hitter, with just one unearned run allowed. For the first time in this World Series, loyal hometown fans were rewarded by seeing their team win. The game had drawn 59 more paid spectators than Game Three; the crowd of 34,683 edged into first place for the largest to date at a Boston baseball game. It was a jubilant throng that left Fenway Park after the 1 hour, 43-minute game, with the Red Sox up three games to one.

After the game, in a column under Doyle’s byline, the Giants second baseman took responsibility for the error that brought in Boston’s second run, but blamed Fred Snodgrass for not cutting off Yerkes’ ball to center. “He could have at least stopped the ball if he had not fielded it cleanly,” Doyle charged.3 He said he felt bad for Mathewson, who was pitching with a sore arm but threw a masterful game.

Jeff Tesreau in his postgame column echoed something else Doyle confessed: “We had expected to encounter a nervous youngster in Bedient, erratic and inclined to be wild on the slightest provocation, and instead we met a pitcher as cool as ice.”4 Indeed, the Giants tried to provoke the Boston pitcher with aggressive bench jockeying, but to no avail.5

Joe Wood also put pen to paper after the game, praising Mathewson for not letting a Boston player reach base after the third, but reserving his greater praise for Hugh Bedient, who would have pitched a shutout had not Gardner taken his eye off the ball for a split-second in the seventh. Of Bedient’s performance after the first couple of innings, Wood said, “He showed fine nerve all the way through and tightened like a steel trap on the one or two occasions that men got on bases.”6

It had seemed that Mathewson was the last hope the New Yorkers had and that the Series was now a lead-pipe cinch to be won by Boston.

Bedient relieved in Games Two and Three, threw a three-hitter in Game Five, and later pitched the first seven innings of the deciding Game Eight — some 18 innings of work with an 0.50 ERA, more than a run below anyone else on the Red Sox. Others got more accolades, but Bedient delivered the goods.

One of the first five players of the inaugural group of inductees into the National Baseball Hall of Fame, New York’s Christy Mathewson was 3-0 in the 1905 World Series, throwing three shutouts against the Philadelphia Athletics. He put up a superb 0.94 ERA in the 1912 World Series but was charged with eight unearned runs and failed to win a game.

Miles away from Fenway Park, an emerging technology offered a glimpse of baseball’s future. Almost a decade before the first radio broadcast of a baseball game, US President William Howard Taft followed the game by wireless. He was aboard the presidential yacht, the Mayflower, and — a story from Newport, Rhode Island, informed — “was in constant touch. … The scores by half-innings were sent by the powerful apparatus at the Naval radio station, and when the final score showed that the Red Sox had won the President was not contented, but asked the names of the players earning the runs and soon afterward for the hits and errors and by whom made.”7

5 “Manager McGraw and the other coaches worked hard with mouth music to rattle the Boston man. This was clearly unfair tactics and should not have been overlooked by “Silk” O’Loughlin, the umpire in charge; but it had no more effect on Bedient than on a cement wall and the Boston lad seemed to cut loose with more confidence as the game lengthened.” T.H. Murnane, “With Bedient Pitching the Game of His Life, Red Sox Win, 2 to 1,” Boston Globe, October 13, 1912: 1.