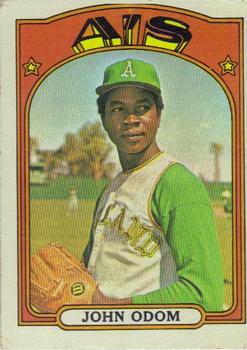 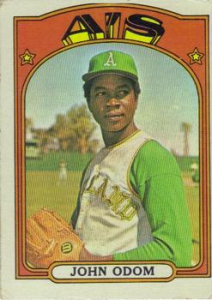 The victory had given the AL West champions a commanding 2-0 lead in the best-of-five series, but with sparkplug Oakland shortstop Bert “Campy” Campaneris suspended for the remainder of the series for whipping his bat at Detroit pitcher Lerrin LaGrow after being decked by a pitch at his ankles, the aging Tigers showed they still had some teeth when the action moved to Detroit. Joe Coleman blanked the A’s in Game Three, striking out 14, and the Tigers rallied for three runs in the 10th inning a day later to tie the series, 2-2.1

With a crowd of 50,276 cramming ancient Tiger Stadium for Game Five, Detroit did more in its first at-bat than it had done in nine innings in its previous encounter with Odom. Dick McAuliffe ignited the attack by grounding a single to right field and taking second when Duke Sims walked. Sims had started the first two games at catcher for the injured Bill Freehan, who was recovering from a fractured right thumb. With Freehan back behind the plate for Games Three, Four, and Five, Sims was moved to left field for Game Five so the Tigers could have another left-handed hitter in their lineup against the right-handed Odom.

Facing Freehan, Odom issued an inside pitch that got away from catcher Gene Tenace. The passed ball moved both runners along, and Freehan followed with a grounder to shortstop Dal Maxvill to plate McAuliffe for a 1-0 lead.2

The Athletics, wearing their trademark turn-of-the-century-style mustaches, long hair, and gaudy gold, green, and white uniforms, battled back in their second at-bat. Reggie Jackson drew a leadoff walk and stole second. Captain Sal Bando blasted a drive deep to right field, where Al Kaline made the catch as the 26-year-old Jackson tagged up and took third, sliding in headfirst. Fryman, appearing as wild as Odom had in the top of the first, followed by hitting Mike Epstein, then caught Tenace looking for the second out.

With runners at the corners and defensive specialist Dick Green at the plate, A’s skipper Dick Williams called for a delayed double steal.3

As listeners around the Bay Area tuned in to KEEN 1370 AM, A’s radio announcer Monte Moore made the call:

“Here goes the runner from first, the pitch is taken, throw down to second, he’s safe! Here comes Jackson toward the plate, here comes the throw. … He is safe! Reggie Jackson steals home!”4

Jackson’s game-tying dash featured numerous moving parts. The bulky Freehan blocked home plate as the muscular Jackson, less than a decade removed from being a coveted college football recruit, slid in spikes first. Reggie’s left knee crumpled as it collided with Freehan’s shin protector, prompting Jackson’s face to contort in pain as he reached for his left hamstring. Freehan looked up to see home-plate umpire Nestor Chylak spreading his arms wide in a safe sign. Fiery Tigers manager Billy Martin argued that Jackson was out, but NBC-TV replays proved Chylak’s call was the right one.5

With his left hamstring now torn, Jackson was sidelined for the remainder of the postseason. He said later that he had initially felt the tear when he was 30 feet from home plate. Williams believed Jackson’s strong desire to score showed that the swaggering Mustache Gang played to win.6

Another hotly disputed call led to the A’s assuming a 2-1 advantage in the fourth. George Hendrick, replacing the injured Jackson, began the inning by bouncing a pitch to deep short. McAuliffe’s throw was low and first baseman Norm Cash, aware of the 22-year-old Hendrick’s speed, leaned forward to glove the throw. First-base umpire John Rice called Hendrick safe, and Cash kicked the dirt in frustration.7

The A’s capitalized on the blown call. Bando sacrificed Hendrick to second, and Tenace lined a single to left. Sims fielded it on one hop and rifled a tremendous throw that Freehan snared just as Hendrick arrived at home plate. Freehan applied the tag but dropped the ball in his collision with Hendrick. Freehan’s drop wasn’t costly, as Chylak called Hendrick safe before the ball fell free.8

It was Tenace’s first hit in the playoffs and hinted at the heroics he would provide in the World Series against Cincinnati, when he would earn Most Valuable Player honors by belting four home runs, driving in nine runs, batting .348, and boasting a slugging percentage of .913.

Odom kept the Tigers to one hit through the fifth inning. But at the end of the fifth, Blue Moon headed for the tunnel; he was hyperventilating.9

“Skip, I can’t go anymore,” he told Williams. “I’m sick.” Rowdy A’s players roared in riotous laughter. “Those weren’t the dry heaves,” one teammate yelled. “They were the dry chokes!”

With Odom out, Williams called on Vida Blue to make his third relief appearance in as many days. High drama ensued as baseball’s best pitcher in 1971 battled the veterans of baseball’s best team in ’68.

The 1971 American League Cy Young winner, who had struggled in 1972 after a preseason holdout, held sway from the sixth inning through the ninth as Detroit hit just three balls out of the infield. It was evident that the Tigers couldn’t get their bats around fast enough to deal with Vida’s blue darter, as the 23-year-old left-hander preserved Oakland’s one-run lead.10

The Tiger Stadium crowd grew restless. Seeking to stay warm in the late-afternoon shadows, they were made angry and anxious by the cold, by the possibility of their season ending, and by the sight of the roguish A’s in their California gold jerseys. California was one of the centers of the Vietnam War protests and Oakland, a rebel city housing rebellious teams in the shaggy A’s and bad-boy Raiders, was associated with the counterculture.11

Tigers fans hurled a smoke bomb at Oakland pitcher Ken Holtzman and hit Hendrick in the head with a bottle. The game was stopped several times as fans littered the field with smoke bombs and firecrackers. Frustrated Tigers faithful knew the A’s were approaching their prime years and that their future was in front of them; indeed, the Mustache Gang would go on to win three straight World Series. The Tigers had peaked four years earlier when they beat the Cardinals in the World Series. While the series seemed at first a generational mismatch, it was still going down to the final pitch.

With Tony Taylor at the plate and two out in the Tigers’ ninth, Moore made Game Five’s final call:

“Vida kicks high, he throws. … There’s a drive into center field, back goes Hendrick. … He is under it. … The Swingin’ A’s have won the American League championship!”12

In a series stacked with surprise performances on both sides, Blue’s was one of the more notable, Vida having gone 6-10 during a disappointing regular season.

The 1972 playoffs were the first in either league to be extended to the full five games and, with the Cincinnati Reds’ ninth-inning rally to beat the Pittsburgh Pirates in Game Five of the National League Championship Series a day earlier, the only time in major-league history (through 2021) that both deciding games were decided by a single run. They set a tone for equally dramatic and emotionally draining five-game LCS encounters the remainder of the decade: Mets-Reds and A’s-Orioles the following October; Yankees-Royals in ’76 and again in ’77.

With the win, the Mustache Gang was ready to take on the Big Red Machine in a celebrated fall classic. The A’s won in seven games for what turned out to be their first of three consecutive World Series championships. A’s versus Reds in ’72 remains the most competitive World Series ever, six of the seven games being decided by one run.