In 1889, for the first time, both the National League and the American Association had tight pennant races that weren’t decided until the last day of the season. In the NL, the defending champion New York Giants just nipped Boston. When Brooklyn, known informally as the Bridegrooms, clinched the AA pennant on October 15, the two clubs arranged for a post-season championship, which the two leagues had been carrying on since 1884. They agreed upon a best-of-11 series, with the first game in New York at the newly opened Polo Grounds.

There were some hills to the west of the Upper Manhattan park, causing an early sunset there, which would prove to be a factor in the series.1 While the two clubs had faced each other in exhibition games previously, this was the first time they had met in a championship game. After Brooklyn joined the National League the following year, they would play each other more than 2,000 times in the regular season,2 including two tie-breaking playoffs. New York and Brooklyn, eight years away from merging, had long been rivals, and the teams would develop the fiercest rivalry in baseball history. This is where it began.

The teams arranged for one umpire from each league to work the series, but National Leaguer Tom Lynch didn’t show up as expected, apparently deciding that the pay offered was not enough. Brooklyn native Bob Ferguson was on hand, so he was chosen to work with fellow American Association umpire John Gaffney. Ferguson started the game calling balls and strikes with Gaffney on the bases. They alternated each half inning.3

A crowd of 8,445 showed up on October 18 for the opening game of the series.4 New York was viewed as the favorite.5 That’s because the Giants represented the older league, which was generally seen as superior to the American Association, although the St. Louis AA club had won the 1886 World’s Series, and at least broke even in the 1885 one. New York had Tim Keefe, winner of four games in the 1888 World’s Series, in the box. He was opposed by Will Terry, at 25 years old already in his seventh year with Brooklyn. The Giants’ captain, Buck Ewing elected to hit first, but his team was retired in order in the first.6 It was a different story in the bottom of the inning, though. Brooklyn captain Darby O’Brien led off with a single up the middle, and before they were retired, the Bridegrooms had pounded out six hits good for five runs. There was some suspicion that Brooklyn was on to Keefe’s signs. Rather than being fooled by his changeup, they jumped all over it.7

The Giants came back with two runs in the top of the second as right fielder “Oyster” Tommy Burns let a hit go by him for three bases. They could have had more, but Johnny Ward was thrown out stealing third for the first out. Brooklyn got one back in the bottom of the inning on Hub Collins’s home run, for a 6–2 lead. It was Collins’s second of four runs scored in the game, part of his still-standing record of 13 for the series. But the Giants fought back. After both Ewing and Ward were thrown out trying to steal third in the fourth, Danny Richardson hit a long line drive to center that Pop Corkhill got his hands on but then dropped as he tumbled head over heels. Richardson circled the bases for a two-run homer before Brooklyn could retrieve the ball. Corkhill had to come out of the game with an injured neck; Joe Visner, usually a catcher, replaced him.

Ward’s single to center drove in his brother-in-law Keefe in the top of the fifth to make it Brooklyn 6, New York 5.8 An error by Darby O’Brien and five hits capped by Jim O’Rourke’s triple resulted in five runs for New York in the seventh and a four-run lead. But after being shut down for four innings, the Bridegrooms came back with two runs in the bottom of the inning, Dave Foutz’s double being the big hit. Terry held the Giants scoreless in the eighth as darkness started to settle over the Polo Grounds. The Bridegrooms came to bat knowing it would be their last chance. After Terry grounded out, Joe Visner doubled. Germany Smith made the second out, Darby O’Brien hit one that Danny Richardson couldn’t handle, and doubles by Collins and Burns gave Brooklyn the lead. The Giants appeared to be having a hard time seeing the ball. Dave Foutz drove in another run with a hit, then quickly let himself be put out between second and third to end the inning with Brooklyn ahead 12–10. The umpires called the game for darkness at one minute before sunset, and the Bridegrooms took a one-game lead in the series.9 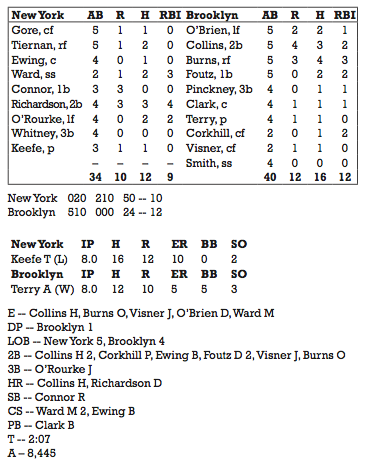 Box score compiled by the author from accounts in the cited newspapers, as well as the New York World and the New York Tribune.

1 The Polo Grounds got dark at least a half- hour earlier than Washington Park in Brooklyn, according to the Brooklyn Eagle, September 11, 1889.

8 Lewis, Ethan M. “A Structure to Last Forever: The Players League and the Brotherhood War of 1890,” http://www.ethanlewis. org/pl/ch2.html.

October 14, 1965: Koufax has nothing to atone for in Game Seven masterpiece