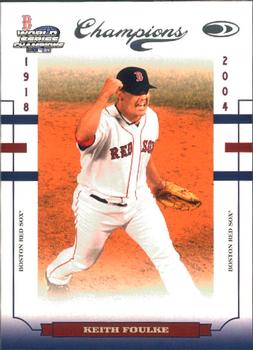 After a pause in the action that lasted 86 years, the Boston Red Sox resumed winning a number of World Series titles. They had won five world championships from 1903 through 1918, then had not won again until 2004. Since 2004, they have added (as of 2020) titles in 2007, 2013, and 2018. It was the wait in between that prompted notions of a “curse” and saw some Red Sox fans be born and die without ever seeing their team win.

In 2004 the Red Sox swept the St. Louis Cardinals in four games. The Cardinals had dominated the National League with 105 wins, but the Red Sox had roared back from a three-games-to-none deficit in the American League Championship Series, winning the final four games and thus accomplishing something no other major-league baseball team had ever done. One might suggest that some form of mystical higher power had energized them; that they were unstoppable. They won four elimination games in a row from the rival New York Yankees, then rolled over St. Louis (which had beaten them in both the 1946 and 1967 World Series) in four games straight — a total of eight consecutive wins on baseball’s biggest stage.

St. Louis skipper Tony La Russa entrusted the ball to right-handed starter Jason Marquis, 15-7 (3.71) in the regular season. Derek Lowe was Boston manager Terry Francona’s choice to start. Lowe had a disappointing 5.42 ERA during the 2004 regular season and a record of 14-12. As it happens, he had lost three postseason games in 2003, but in 2004 he had won the clinching game of both the Division Series and the ALCS.

In all three of the 2004 World Series games, the Red Sox had scored in the first inning. Game Four followed the pattern. On the fourth pitch of the game, center fielder Johnny Damon homered into the Cardinals bullpen in right-center field, the ball seeming to hit off the bench. It was Damon’s first home run of the World Series. It was also the only run the Red Sox needed, since Lowe pitched seven innings of shutout ball, allowing only three base hits and walking only one. Three relievers — Bronson Arroyo, Alan Embree, and Keith Foulke — combined to throw the final two innings, similarly shutting out St. Louis while collectively allowing just one base on balls and one base hit.

Marquis walked Manny Ramirez, but otherwise escaped any further damage in the first.

Lowe took the mound and gave up a leadoff single to Tony Womack that rose just over the glove of a leaping Orlando Cabrera at shortstop. Larry Walker was up next. He already had two World Series homers, and six in the 2004 postseason. He surprised perhaps everyone by dropping a bunt toward third base. Unfortunately for Walker, the bunt was closer to the mound than the baseline and Lowe pounced on it, firing to first base. Walker had been going for a base hit, but still helped the team by advancing Womack to scoring position with just one out. If the Cardinals could score at least one, they’d erase the 1-0 Red Sox advantage. They didn’t. Albert Pujols had been the MVP of the NLCS, with 4 home runs and 9 RBIs. He’d driven in five runs in the Division Series, but hadn’t driven in even one run in the World Series. He grounded to Mark Bellhorn at second base. Womack took third. Scott Rolen was up next. He hit a ball that skittered down the first-base line, staying fair, but Lowe ran over to the line, snagged the ball, and tagged Rolen for the out that ended the first inning.

In the second inning, Trot Nixon doubled to right-center with one out and Bellhorn walked. Lowe contributed with a sacrifice, but Damon grounded out to first unassisted. The Cardinals went down in order.

The Red Sox scored two more runs in the top of the third. With one out, Ramirez singled between short and third. He ran his postseason-game hitting streak to 17 games. David Ortiz doubled into the right-field corner, Manny holding at third base. Jason Varitek hit the ball, hard, to first base. Pujols didn’t hesitate; he fired the ball home and Ramirez was out at the plate. Bill Mueller walked. Bases loaded. Nixon was up and took three balls. Marquis had been behind most of the batters he’d faced, but rather than take the next pitch, Nixon aggressively swung, and it paid off.  He hit the ball to right-center, off the base of the wall for a two-run double. It was 3-0, Red Sox. With Lowe on deck, Marquis intentionally walked Bellhorn. Lowe struck out.

As he had in the second inning, Lowe set the Cardinals down in order in the third and then again in the fourth.

Marquis settled down, retiring the side in the fourth and allowing only one baserunner in the fifth. Edgar Renteria doubled in the bottom of the fifth, and Lowe uncorked a wild pitch to the next batter, but no run scored.

Dan Haren relieved Marquis and secured a one-two-three seventh. Lowe allowed but a single to Renteria.

In the eighth, Mueller singled off Haren and Ortiz doubled. La Russa called on Jason Isringhausen to relieve. Isringhausen walked Bellhorn on six pitches. Lowe was due up, but Francona pinch-hit for him. Kevin Millar struck out. Damon grounded to first base and once more Pujols threw home, Yadier Molina applying the tag. And Cabrera struck out. Bases loaded, nobody out and the Red Sox had failed to add even one insurance run.

Arroyo walked Reggie Sanders with one out in the bottom of the eighth. Embree came in, struck out a batter and got a pop fly to short from the other. The game went to the ninth.

Varitek singled in the top of the ninth but there was nothing more.

Three outs were all that Boston needed to win their first World Series in 86 years. For the fourth game in a row, the ball was handed to Foulke at what the Red Sox hoped would be the end of the game. Pujols singled through Foulke’s feet, right up the middle and into center field. Rolen flied out to right. Jim Edmonds struck out on three pitches. Renteria was up. He had two of St. Louis’s four hits. He swung at the second pitch and hit the ball directly to Foulke on one hop. As Red Sox radio announcer Joe Castiglione called it: “Foulke to the set. The 1-0 pitch, here it is. Swing and a groundball, stabbed by Foulke. He has it. He underhands to first, and the Boston Red Sox are the World Champions! For the first time in 86 years, the Red Sox have won baseball’s world championship. Can you believe it?”1

Bryan Burwell of the St. Louis Post-Dispatch lamented how much the Cardinals had “grandly underachieved.”2 They had collected only 24 hits in four games, batting .190.

The Boston media was, of course, ecstatic and “more than 3 million” people turned out for a celebratory victory parade.3

“It was like a four-hour Who concert,” said Curt Schilling. “It was the loudest thing I’d ever been involved in, for four straight hours.”4

“Even though we’d heard about 1918 — every single day — it was during the parade when we really understood. You heard so many fans say that they can die happy. You saw others who were really emotional because parents and grandparents had passed on before they got to see a Red Sox victory. There was a lot of emotion, and that’s when you really learned that Red Sox blood runs through these people.”5

Truth is stranger than fiction? As the 2004 postseason progressed, the Farrelly Brothers suddenly felt compelled to prepare to shoot a different ending for their feature film Fever Pitch. They flew Jimmy Fallon and Drew Barrymore to St. Louis, and they were on the field filming during the Red Sox celebration.6

Derek Lowe did get the win; he had won the clinching game of each of the three rounds of the 2004 postseason — the Division Series, the League Championship Series, and the World Series. In the three games combined, he had worked 14 innings and allowed only five hits.

Keith Foulke had appeared in 11 of the 14 postseason games. Game Four was his third save of the playoff run. He had won Game One of the World Series.

Manny Ramirez was named World Series MVP. He had driven in four runs. Interestingly, he’d driven in seven in the Division Series, but not even one run during the seven games of the 2004 ALCS.

Red Sox fans fortunate to have been present in St. Louis after Game Four was complete all report — to a person — that Cardinals fans were exceptionally gracious and seemed to generously appreciate all that Red Sox fans had suffered for so long.

In addition to the sources cited in the Notes, the author relied on Baseball-Referenece.com, Retrosheet.org, and a YouTube video of the game.