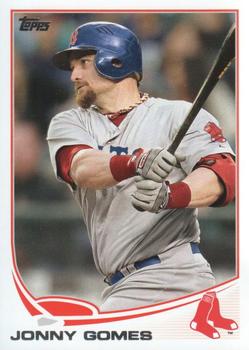 There was concern in Red Sox Nation as to whether Clay Buchholz would be up to the task of starting Game Four. The Cardinals now held a two-games-to-one lead, with Games Four and Five slated for St. Louis, where they had proved exceptionally strong during both the 2013 regular season (54-27) and the postseason (6-1). Indeed, they had won 13 of their last 14 postseason home games.

“It should scare you,” wrote the Boston Globe’s Dan Shaughnessy, “to think that the Sox have determined that, at this hour, Buchholz is their fourth-best starter.”1 A glance at his record would lead one to think he was their undisputed ace; he was 12-1 in 2013 with a 1.74 ERA. But what the record didn’t show was that he hadn’t pitched from June 8 until September 10, losing three months to a sore shoulder. He’d had four starts in September and pitched well, but was hit pretty hard (a 5.40 ERA) in three postseason starts. He acknowledged that he was “not 100 percent.” The day before Game Four, Buchholz admitted feeling “tightness” in his shoulder.2 Manager John Farrell planned to monitor Buchholz’s performance and well-being closely, making it sound as though the right-hander’s role was something like what later became known as an “opener” — just to throw a few innings.3

It turned out he did quite well, for four innings.

Starting for St. Louis was Lance Lynn, likewise a right-hander. He was 15-10 (3.97) in the regular season. He had 19 games of postseason experience and had won both Game One (relieving) and Game Four (starting) in the NLCS. Behind Lynn, manager Mike Matheny said, “I think we have multiple pitchers that can throw multiple innings.”4 That didn’t sound like a ringing endorsement.

Through the first four innings, Lynn faced the minimum of 12 Boston batters. David Ortiz got an infield single off him — literally, a broken-bat ball that struck Lynn on the left heel — in the second inning, but was erased on a double play.

Buchholz allowed a double and a walk in the second but held the line and kept the Cardinals scoreless. In the bottom of the third, St. Louis scored the first run of the game. After Buchholz struck out Lynn, Matt Carpenter singled to right-center. The ball glanced off Jacoby Ellsbury’s glove — deemed an error — and Carpenter advanced to second base. Carlos Beltran then hit a ball that took the same path, through the infield and into right center. It was a single and Carpenter scored. St. Louis led 1-0 after three innings.

In the bottom of the fourth, a walk, a force out, and a two-out wild pitch saw David Freese on second base, Daniel Descalso was intentionally walked to get to the pitcher, Lynn. Buchholz got Lynn to line out.

The Red Sox tied the score in the top of the fifth. Ortiz hit a gapper to right-center for a double. It was his seventh hit in the World Series; the entire Red Sox team so far had only 20 hits.

Following Ortiz, Jonny Gomes, a last-minute replacement in left field for the injured Shane Victorino, practically wore Lynn out, working a 10-pitch base on balls.5 Xander Bogaerts walked on five pitches. The bases were loaded with nobody out, but Matheny stuck with his starter. Shortstop Stephen Drew (1-for-10 in the Series) swung at the first pitch and lifted a sacrifice fly to Matt Holliday in left. The throw to the plate struck Ortiz and he was safe. Game tied, 1-1.

The Red Sox still had two runners on with one out. Lynn took eight more pitches to strike out catcher David Ross. With Buchholz due up, the Red Sox had Mike Carp pinch-hit. He grounded out to first to end the inning.

Felix Doubront took over for Buchholz, who had done well, allowing just the one run in four innings.6 Doubront got two strikeouts in the bottom of the fifth, with a lineout to left in between.

David Ortiz called an impromptu team meeting in the dugout after the final out of the fifth. Ross said it was the first time he’d ever done that. The meeting was necessarily quick. He pretty much reminded them that they had a rare opportunity. John Farrell said, “He pulled everybody together. It was meaningful. He’s the one guy, of the guys that we have — he’s one of the guys that people look up to.”7

It was back to the top of the order for the Red Sox in the sixth. Ellsbury faced Lynn and popped up to short. Daniel Nava grounded out, third to first. On Lynn’s first pitch to him, Dustin Pedroia punched a single to left-center. Lynn pitched carefully to Ortiz, keeping the ball very low — so carefully that Ortiz walked on four pitches. Gomes was up next. Matheny called on Seth Maness to relieve Lynn.

Gomes did not have a hit or RBI in nine World Series at-bats to this point. The count built to 2-and-2 and the Busch crowd was amped up, hoping for a strikeout. Instead, Gomes hit the ball — hard — and deep into the Red Sox bullpen in left field for a three-run homer. As he ran back into the dugout, teammates tugged on his long beard. He had given them a 4-1 lead. It was, as Tim McCarver noted on the telecast, the first extra-base hit in the World Series by any Red Sox outfielder.

St. Louis sportswriters unanimously cited Matheny for a sudden lapse in his typically successful approach to handling pitchers. Here was “a manager who lives by unyielding faith in his guys [and] registered a tacit vote of no-confidence in Lynn and lefthanded reliever Randy Choate. … Punishment was swift and severe.”8

Gomes said later, “The one thing I’ve always wanted out of this game was the opportunity. … I got that opportunity tonight and the one thing you can guarantee is when I’m in the lineup, I’m going to be swinging.”9

Doubront disposed of the three St. Louis batters he faced in the bottom of the sixth.

Maness got two outs in the top of the seventh, and Choate pitched to Ellsbury, getting him out, too.

In the bottom of the seventh, Doubront got the first two outs, but Shane Robinson — pinch-hitting for Choate — doubled to left field. Craig Breslow relieved Doubront. Matt Carpenter singled and Robinson scored, cutting Boston’s lead to 4-2. After Breslow walked Beltran on four pitches, Farrell replaced him with Junichi Tazawa. He got Holliday to ground out.

Kevin Siegrist was pitching for St. Louis. With two outs, Ortiz singled in the top of the eighth, giving him a 3-for-3 night, and was replaced by pinch-runner Quintin Berry. Berry stole second base. Gomes was up again. John Axford took over for Siegrist. He walked Gomes, but then struck out Bogaerts.

John Lackey, ordinarily a starter, came in to pitch the eighth.10 Yadier Molina reached third base with one out on a throwing error and a wild pitch, but Lackey retired the next two batters and the game went to the ninth.

The Red Sox did nothing against Axford.

Koji Uehara came in to close for Boston, with a two-run lead. Shortstop Daniel Descalso grounded out, second to first. Allen Craig pinch-hit for Axford and singled over Nava’s head in right field. Still hampered with a bad foot, he did not try to stretch it to a double.11 Rookie Kolten Wong pinch-ran for Craig. Matt Carpenter popped up to Pedroia at second base. Two outs.

Carlos Beltran stepped into the batter’s box. A home run would tie the game. He’d hit 24 of them during the regular season, leading the Cardinals, and two more in the postseason. But Uehara wasn’t a likely candidate to give up a homer. He’d allowed only five during the season. He was far more likely to strike out a batter. He had struck out 101 in 74⅓ innings of relief, and walked only 9.

There was no home run. There was no walk. There was no strikeout. Koji’s first pitch was low, for ball one. His second was right over, for strike one. Uehara then surprised everyone — particularly Wong — by firing a pickoff throw to Mike Napoli at first base and getting Wong. Game over.

It wasn’t a play Uehara had worked on. Nor had it been signaled in advance — like Boston reliever Jonathan Papelbon’s pivotal pickoff of Holliday, then with the Colorado Rockies, in the 2007 World Series. “That was on his own,” said Farrell.12

It was about as embarrassing an ending as one could imagine for Wong. About all he could say after wards was, “My foot slipped.”13

For the second game in a row, the Red Sox and Cardinals ended the night on an unusual play — the first-ever World Series game that ended on a pickoff followed the first to end on an obstruction call. Each team got a win out of the oddities. The Series was tied, two wins apiece. And the final two of what might be three games would be played back in Boston at Fenway Park.

3 Shaughnessy, “Can Buchholz Shoulder Load?” Farrell said, “There will be at least a thought of a game time or a range or pitches. It’s kind of an estimation. … It’s not something exact.” Buchholz, quoted in the Abraham article, said, “I’m sure there’s going to be people talking to me each time I leave the field.”

5 Only during batting practice did Gomes learn he would be in the lineup, playing left field, because Victorino experienced a tightening in his lower back. Nava moved from left to play right field. John Farrell said, “Shane wasn’t capable and it turned out his replacement was the difference.” Dan Shaughnessy, “Resilient Red Sox Tie It Up,” Boston Globe, October 28, 2013: A1.

6 In a postgame article, one St. Louis writer suggested that because Buchholz had a fatigued shoulder, it threw off the Cardinals. The Red Sox pitcher “could only muster a bunch of 88 mph batting-practice fastballs. … Buchholz wasn’t the same pitcher the Cardinals eyed on video, which made the advance scouting reports on Buchholz irrelevant. … They didn’t seem to know what to do.” Bernie Miklasz, “Deserving Defeat,” St. Louis Post-Dispatch, October 28, 2013: W3. Buchholz said, “I felt good. It was a conscious effort not to overthrow, knowing I was not going to have the fastball velocity that I usually have. I created more movement on a couple of my pitches and had defensive plays behind me. … The velocity wasn’t there but I was able to locate my pitches well.” Nick Cafardo, “Short Start Long on Effort,” Boston Globe, October 28, 2013: D2.

10 It was the first time he’d pitched in relief since 2004, when he was with the Angels.

11 X-rays on the foot after the game-ending play in Game Three had proved negative and Craig was cleared to play.