They might have called it the first “Subway Series” if there had been a subway at the time. That wouldn’t arrive in New York for 15 years after the New York Giants of the National League triumphed over the Brooklyn Bridegrooms of the American Association to make the victors the first major-league team to win consecutive World Series.

The 1889 regular season was one of the most exciting in baseball history. Two teams in the National League, New York and Boston, and two in the American Association, Brooklyn and St. Louis, came down to pennant-deciding games on the last day.1 New York’s victory, following the Giants 1888 World Series triumph over the American Association champion St. Louis Browns, gave the Giants a chance to be the first team to win consecutive World Series titles since the two league champions began meeting after the 1884 season.

Adding to the intrigue was the impending rebellion of nearly all key players from both leagues, and the prospect that a third major league, the Players League, would be formed.

Owners of the two teams agreed on a best-of-11 series, the games to alternate between the home parks of the two teams.2 The first was to be played at the “New” Polo Grounds (opened during the 1889 season) at 155th Street and the Harlem River in Manhattan, and the second at Washington Park between Third and Fifth Streets and Fourth and Fifth Avenues in Brooklyn.3

Play commenced on Friday, October 18, with a 12–10 Brooklyn victory at the New Polo Grounds. New York cranks, players, and management were frustrated by what they felt was biased umpiring by Brooklyn native Bob Ferguson.4

Game Two in Washington Park drew a huge throng of 16,100 with all seating claimed two hours before the start. Thousands more stood in a great roped-off, horseshoe-shaped portion of the deep outfield and foul territory, and additional hundreds sat atop the outfield fence. The Giants were victorious, 6–2. The series was now tied at one game apiece.5

Without Sunday baseball allowed in either city, there was no game on October 20. On Monday 3,000 fans made their way to the upper reaches of Manhattan only to find that the game was canceled because of heavy rain that morning. This left many of the Giants’ followers chagrined as the club had failed to alert downtown stations that the game was called off.6

Although the weather for Tuesday, October 22, was perfect and the Series was tied, the New Polo Grounds saw fewer than half the 8,000 who had watched Game One. Many had been frustrated by the previous day’s trip made in vain. Perhaps it was better that more New York cranks didn’t see the game, which Brooklyn won 8–7. Once they got a slight lead, the Bridegrooms resorted to blatant stalling tactics. At 5:07 p.m. (six minutes before official sundown), with the game in the ninth inning and two New York runners on base, umpire John Gaffney called the game because of darkness. Giants management was furious. Manager James Mutrie referred to his opponents as “schoolboys.” Brooklyn led the series 2–1.7

Game Four was played back in Washington Park on Wednesday, October 23, in weather that turned very chilly. To make matters less comfortable for the Giants, the Bridegrooms continued their stalling tactics. Coupled with an on-field wrangle that followed a close play, the game was called for darkness after only six innings with Brooklyn ahead, 10–7. The Bridegrooms now led three games to one.8

On Thursday, October 24, before the fifth game, scheduled at Washington Park, Giants owner John B. Day met with Brooklyn owner Charles Byrne and umpires Gaffney and Tom Lynch. Day threatened to withdraw from the Series unless the umpires acted impartially and Brooklyn stopped its stalling tactics. The result was a New York landslide, 11–3, against Brooklyn ace Bob Caruthers. The Series now stood at three wins for Brooklyn and two for New York.9

For Game Six the teams returned to the New Polo Grounds, where the Giants tied the series at three games apiece, prevailing 2–1 in 11 innings on the heroics of shortstop John Montgomery Ward.10 On Saturday, October 26, New York beat the Bridegrooms 11–7 and took the Series lead, four games to three. On Monday, October 28, the Giants secured their fifth Series victory in a 16–7 blowout in Washington Park.

The ninth and final game was played Tuesday in Manhattan and was won by the Giants, 3–2. New York pitcher Hank O’Day allowed the Bridegrooms only four hits, two of which came in the first inning. In the bottom of the ninth, Brooklyn raised a last-ditch threat when Germany Smith reached first on an error, but he was erased when Doc Bushong lined out and Smith was caught off first for a double play. The last batter, Darby O’Brien, managed a base on balls, but O’Brien was caught stealing to end the Series.11 The Giants were again the world champions.

When the Giants had won their second consecutive National League pennant less than a month earlier, there was much celebration, particularly upon their triumphant return to New York from Cleveland. Now, there was nothing beyond a brief post-game high exhibited by the team as various VIPs entered the clubhouse to congratulate them.

Throughout the 1889 World’s Series daily newspaper reports of the game frequently appeared sideby- side with the latest reports about the formation of the Players League, which would soon spirit away nearly all National League and American Association regular players, including the biggest stars. Once the clubhouse door at the New Polo Grounds had been secured that evening, the celebration ended and war began.12 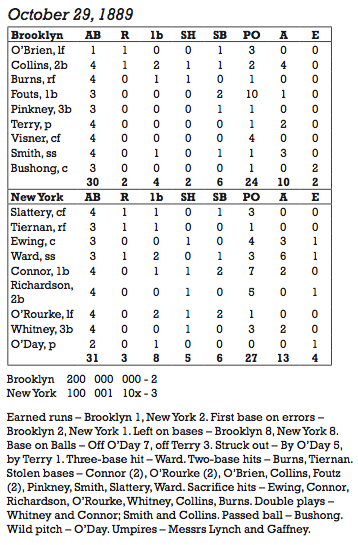 October 11, 2017: Too sick to pitch? Strasburg has last laugh against Cubs in NLDS