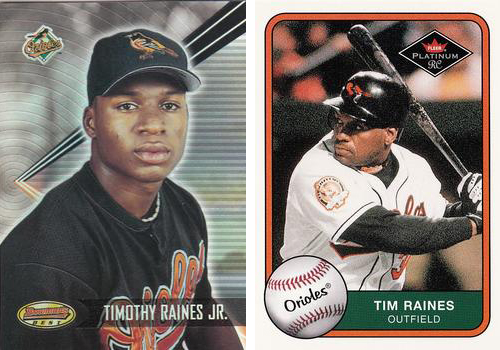 The final week of the 2001 major-league schedule, moved to October after the September 11 attacks, yielded a bounty crop of milestones and historic occurrences.1 One such moment occurred on October 3, when Tim Raines Sr., a Hall of Fame-bound star in his 22nd major-league season, and his son Tim Raines Jr., a rookie call-up in his third big-league game, played together for the first time.

When the Raineses suited up for the Baltimore Orioles, it was only the second time in baseball history that a father and son had played as teammates in a major-league game. Ken Griffey Jr. and his father, Ken Sr., had been the first, with the Seattle Mariners in 1990.

Tim Raines Sr. had debuted with the Montreal Expos on September 11, 1979 – five days before his 20th birthday and 11 days after the birth of his son and namesake. Raines Sr. spent the first 12 seasons of his major-league career with the Expos and returned in 2001 for a second stint. He made the Montreal roster coming out of spring training that season, after missing the second half of 1999 because of lupus and failing to catch on with the New York Yankees in 2000. The 41-year-old was the Expos’ best hitter off the bench before missing over three months with a shoulder injury. He returned in late August and raised his batting average by over 40 points, sitting at .308 after a pinch-hitting appearance against the Florida Marlins on October 2.

Raines Jr.’s rise to the big leagues was somewhat nontraditional. After being drafted out of high school by Baltimore in the sixth round of the 1998 amateur draft, he spent his first three professional seasons in the low minors. He hadn’t hit for power or high average, but he showed speed on the bases, as his father had done during the first half of his career. Raines Jr. stole 81 bases in 2000 with Class A Frederick. In 2001 he started the season in Class A again. By the end of the minor-league season, he had progressed through the Orioles’ system, including 40 games with Triple-A Rochester.

With the Orioles beset by injuries, the 22-year-old Raines Jr. got a call-up.2 He made his major-league debut on October 1, entering in the ninth inning of a 1-0 loss to the Toronto Blue Jays to play center field. He started in center the next day, doubling off Matt DeWitt in the ninth for his first big-league hit and then scoring the winning run when Brady Anderson walked with the bases loaded.

Raines Sr. said in his autobiography, Rock Solid, “I had talked publicly for years about how I wanted to stick around long enough to play at the same time as Tim Jr. It never really occurred to me that we would ever have an opportunity to play on the same team.”3

To a large extent, the Raines reunion was arranged by Baltimore and Montreal management as a favor to Raines Sr.4 Raines Sr. had taken a day off from the Expos to travel to Baltimore to see his son’s debut. In his autobiography, he said that Expos general manager Jim Beattie was aware of his desire to play with his son. Beattie contacted Orioles general manager Syd Thrift to see if they could work out an arrangement to trade him to the Orioles. Thrift was on board with the idea, since the Orioles weren’t in contention for the playoffs and needed help in the outfield during the last week of the season.5 The transaction that traded Raines Sr. for a player to be named later was consummated on October 3. Thrift said of the trade, “They wanted to do [the trade] for Tim Sr. because of what he’s done for baseball. It’s a fine family.”6

Raines’s autobiography said that when he learned from Beattie that the deal had been completed, “I thought he was kidding around. He assured me he wasn’t. Still, I waited to say anything to my wife, parents, and son because I didn’t want them to be disappointed in case the deal somehow fell through.”7

Raines Jr. didn’t find about the trade until his father showed up on the field in an Orioles uniform for the game on October 3. Raines Sr. wrote, “I’m sure it was the greatest surprise of his life, and I’m so grateful that the Expos and Orioles made it possible.” Father and son stood next to each other in an emotional moment during the national anthem.8 Raines Jr. said, “I haven’t played with him since I was 7, 8 years old in Montreal for father-son games.” They had been on the same field once before earlier in the season, as the father and son had played against each other when Raines Sr. was on a minor-league rehab assignment.9

With two Orioles games already under his belt, Raines Jr. started in center field against the Blue Jays, batting in the leadoff spot. He hit a double in his first plate appearance off pitcher Pasqual Coco, was sacrificed to third, and scored the first run of the game on Jeff Conine’s sacrifice fly. In the bottom of the fifth, Raines Jr. singled off Coco, stole second, went to third on catcher Darrin Fletcher’s throwing error, and scored on Luis Matos’s double.

Orioles manager Mike Hargrove seized an opportunity to use Raines Sr. in a pinch-hitting role in the bottom of the seventh inning. With the score tied, 4-4, and runners on first and second, Raines Sr. batted for designated hitter Chris Richard lined out to right field. With the plate appearance, the Raineses became only the second father and son to appear in a major-league box score as teammates.

The Orioles held the lead four times but wound up on the losing the game. Toronto came from behind with three runs in the eighth on Felipe Lopez’s bases-loaded triple to make the score 7-5. Raines Sr., who had stayed in the game as the designated hitter, drove in the Orioles’ final run in the ninth with a sacrifice fly off Billy Koch. Toronto won, 7-6. Other key offensive players included the Orioles’ Conine with three hits and three RBIs and the Blue Jays’ Jose Cruz Jr., who hit a two-run home run.

The Raines duo went on to play in three more games together during the final week, teaming up in the outfield as starters in two of the games.

At any other time, the extremely rare appearance of a father and son as teammates in a major-league game would have been newsworthy. But in the Raineses’ case, their achievement was largely overshadowed by milestones by superstars Rickey Henderson, Barry Bonds, and Cal Ripken Jr. On October 4 Henderson, then with the San Diego Padres, broke Ty Cobb’s career runs-scored record, while Giants slugger Bonds tied Mark McGwire’s season record of 70 home runs. Bonds broke the record the next day by hitting two more homers. Ripken retired on October 7, the last day of the season, concluding a career characterized by his “Iron Man” record for consecutive games played. Ripken played in his 3,001st game, the most by any Orioles player in history. Henderson recorded his 3,000th career hit on the season’s final day, which was also Padres legend Tony Gwynn’s final major-league game.

Raines Sr. didn’t retire after the 2001 season. He said in his autobiography, “I didn’t have anything left to prove or accomplish, but I couldn’t bring myself to step away from the game.” It wasn’t a cinch that his son would start the 2002 season in Baltimore, so he signed as a free agent with the Marlins, with whom he played his final season. He played 23 seasons in the majors. A seven-time All-Star, he finished with 808 stolen bases, fifth on the all-time list. He was elected to the National Baseball Hall of Fame in 2017.

Raines Jr. appeared with Baltimore in parts of the 2003 and 2004 seasons. His career consisted of 75 major-league games. He spent 12 seasons in the minors and also played professionally in China, Mexico, and Venezuela, and in independent leagues, concluding his career in 2011.

The author accessed Baseball-Reference.com for box scores/play-by-play information (baseball-reference.com/boxes/BAL/BAL200110030) and other data, as well as Retrosheet.org (retrosheet.org/boxesetc/2001/B10030BAL2001).

1 The 2001 season was extended a week to allow for the makeup of games that were call off after the 9/11 attacks.

4 In the Griffeys’ case, the father-son reunion was more of a move to strengthen a baseball team, since Griffey Sr. played for the Mariners during the entire month of September 1990, appearing in 21 games and batting .377/.443/.519, and returned for 30 more games before retiring in 1991.