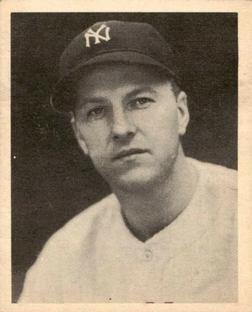 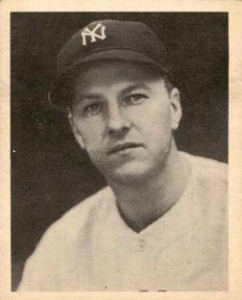 Despite being down to the Yankees two games to one in the 1936 World Series, the Giants had reason to be confident that they would even the Series in Game Four behind their ace, Carl Hubbell. King Carl was in the midst of one of the most dominant stretches of any pitcher before or since: The 33-year-old left-hander had won his last 16 regular-season decisions and had also beaten the Yankees in Game One.1

The Yankees countered with curveball specialist Monte Pearson, who had come to New York from Cleveland in an offseason trade and thrived, going 19-8 and making the American League All-Star team. The 28-year-old right-hander had hurt his back late in the season, however, and for a time it was unclear whether he would even pitch in the Series. This elicited chatter from the press corps that Pearson’s ailment wasn’t serious and that he lacked toughness. “There is no escaping the fact that Pearson’s condition is in a good measure mental,” wrote one columnist. “Monte is the quiet, serious type who does a lot of thinking about himself and quite often he conjures up things that don’t exist.”2 But in a pattern that repeated itself in future fall classics, Pearson healed quickly and manager Joe McCarthy announced him as his Game Four starter.3

After cold and rainy weather earlier in the week, Game Four was played in sunshine before 66,669 fans at Yankee Stadium, the largest crowd ever to see a Series game to that point. One of those in attendance was a 14-year-old Giants fan named Arnold Hano, who was thrilled to see his favorite player, Hubbell, take on the Bronx Bombers.4

The Yankees struck first, scratching out an unearned run in the bottom of the second when Jake Powell reached on an error, moved to second on an infield out, and scored on a ground single by George Selkirk.

Pearson, meanwhile, was having little trouble with the Giants, allowing only a walk and a single in the first three innings, and both runners were thrown out by Bill Dickey on stolen-base attempts. As a devotee of the Giants, what Hano observed from his seat in the bleachers both impressed and worried him. “Pearson walked with a confident manner – he looked like a man who knew how to go about his business,” recalled Hano, more than 84 years later. “What surprised me was how softly he threw. He was a curveball pitcher. He had the Giants off-balance all day.”5

Meanwhile, the Yankees added on in a big way in the bottom of the third. Frank Crosetti led off with a double to right field and was quickly plated by Red Rolfe, who “[c]rouching at the plate as though he intended to bunt … whaled a clean single through the box, scoring Frankie.”6 After a foul out by Joe DiMaggio, Hubbell faced off against Lou Gehrig. Hubbell fell behind 3-and-1, threw a wild pitch that sent Rolfe to second, then left a pitch up that Gehrig didn’t miss. He “lashed a screamer into the right field bleachers”7 that landed only a few feet from Hano.8 It was the first home run Hubbell had surrendered all year with a runner on base.9

Staked to a 4-0 lead, Pearson ran into his first difficulties in the fourth. A single by Dick Bartell, a walk to player-manager Bill Terry and a force out at second left runners at first and third with one out. Jim Ripple delivered a run-scoring single to make the score 4-1 and put runners at first and second. But Pearson bore down and got Gus Mancuso on a groundout before closing out the inning by retiring Burgess Whitehead on a pop fly.

Hubbell and Pearson traded zeros through the middle innings. The Yankees threatened to add to their lead in the bottom of the seventh, when Pearson – who had begun his career in semipro ball in Fresno, California, as an infielder – led off the inning with a double to right-center, his second hit of the game. Crosetti kept the line moving with a single to right, but Pearson was held at third, and Hubbell was able to work out of the jam by inducing a Rolfe pop fly and a double-play grounder off the bat of DiMaggio.

Perhaps tired from running the bases, Pearson struggled a bit in the top of the eighth, as Sam Leslie batted for Hubbell and opened the frame with a base hit. Jo-Jo Moore followed with another single to put runners at first and second with nobody out. After a groundout to the right side moved the runners to second and third, Terry drove in a run with a grounder to Tony Lazzeri to make the score 4-2. With two outs and a runner on third, Giants slugger Mel Ott represented the tying run, but he grounded out meekly to second base to end the threat.

In the bottom half of the inning, the Yankees got the run right back. Gehrig led off with a double and, after advancing to third base on a groundout by Dickey, was driven home on a single by Powell.

With his three-run lead restored, Pearson made quick work of the Giants in the top of the ninth, allowing only a harmless two-out pinch single to Mark Koenig before getting Travis Jackson to pop out to end the game and give the Yankees a commanding 3-games-to-1 Series advantage. Pearson’s line: a complete-game win, two earned runs allowed, seven strikeouts, and two hits of his own against the Giants ace.

“After Pearson had beaten the great Hubbell, Yankees manager Joe McCarthy announced he was looking for a blind man suffering from hardening of the arteries and fallen arches so he could send him out there today,” read one tongue-in-cheek recap.10

Giants fans like Hano were less amused. “That was a terrible day,” he recalled.11 Terry’s team never recovered, eventually losing the Series to the Yankees in six games.

Pearson’s win, it turned out, was the first in what would be a string of dominant fall classic pitching performances. In 1937, 1938, and again in 1939 he pitched brilliantly (most notably hurling a near no-hitter in 1939); and each year delivered a win for the Yankees, playing a key role in their run of four consecutive championships. Pearson’s 4-0 career mark and his 1.01 ERA over those four games qualify him as one of the greatest World Series hurlers of all time.

The author wishes to thank the late Arnold Hano for sharing his crystal-clear memories of this contest. Although he still sounded a bit peeved that the Yankees beat Hubbell on that long-ago day, Hano’s insights and humor made for a wonderful conversation. Sadly, Hano died in October 2021 at age 99.

The author also wishes to thank SABR member Jon Leonoudakis for facilitating the author’s interview with Hano. Jon’s documentary film, “Arnold Hano: A Century in the Bleachers,” can be found at https://vimeo.com/ondemand/thesweetspot.

1 Hubbell went on to win his first eight decisions in 1937 for a regular-season streak of 24 consecutive wins spread over two seasons.

3 Pearson had ailments that made his availability questionable in both the 1938 and 1939 World Series; but he ended up rallying to make a start – and win it – each year. See https://sabr.org/bioproj/person/monte-pearson/.