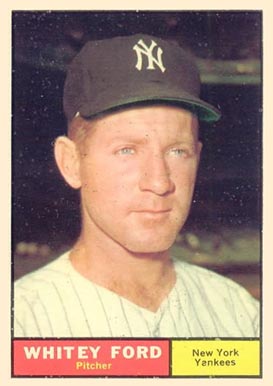 By Whitey Ford’s standards, 1960 had been a down year. With a won-lost record of 12-9, his .571 winning percentage was the lowest of his career. When the Yankees returned to the World Series after finishing third in 1959, Ford — who had been New York’s Game One starter in each of their World Series appearances from 1956 to 1958 — was bypassed in favor of Art Ditmar for the opening game against Pittsburgh.

Ford pitched shutouts in Games Three and Six, as the Yankees won by scores of 10-0 and 12-0. But by working nine innings the day before, he was unavailable for New York’s 10-9 loss to the Pirates in Game Seven.

As the 1961 regular season began, first-year Yankee manager Ralph Houk was confident his team deserved to be favored to win the American League pennant. Assessing a lineup that included Roger Maris, Mickey Mantle, Bill Skowron, and Yogi Berra, Houk commented, “We’re going to score some runs.” With regard to his pitching staff he said, “I’m not worrying about that, either. I’d say we’re ready to go.”1

New York found itself in a fight for first place with the surprising Detroit Tigers for most of the summer. A three-game sweep of the Tigers at the beginning of September was the start of a 13-game winning streak that effectively ended the AL pennant race. New York finished the season with 109 victories, second most in team history, eight games ahead of Detroit. Maris (61 homers) and Mantle (54) combined for 115 of the team’s record 240 home runs. Ford finished the regular season at 25-4, leading all major-league pitchers in wins and winning percentage (.774). He was recognized later in the year by being named the Cy Young Award winner for 1961, and would place third, behind teammates Maris and Mantle, in the American League’s MVP voting.

New York faced the Cincinnati Reds in the World Series. The Reds, after placing sixth in the eight-team National League in 1960, were not expected to challenge for the NL flag in 1961. But they moved into first place to stay on August 16 and finished four games ahead of the second-place Dodgers. Cincinnati’s offense was led by outfielders Frank Robinson (who would be named the NL’s MVP after hitting 37 home runs, with 124 RBIs and a .323 batting average) and Vada Pinson (third in MVP voting, with a .343 average and a major-league-best 208 hits). The pitching staff was anchored by the emergence of starters Joey Jay (21-10) and Jim O’Toole (19-9).

Cincinnati manager Fred Hutchinson chose O’Toole to start the first game of the Series, at Yankee Stadium. In his third full season in the majors, the 24-year-old left-hander had a record of only 11-9 in early August as the Reds battled Los Angeles for first place. Beginning with a shutout of the Dodgers on August 16, O’Toole won his last eight decisions of the season. He had not given up a home run since allowing one to Ernie Banks of the Cubs on July 28.2

Opposing O’Toole was Ford, 32 years old and a fellow left-hander. It would be the 15th Series start of his career. When O’Toole was pitching in high school, Ford was his idol. “I watched him a few times at Comiskey Park,” said O’Toole, a Chicago native. “I’ve tried to pattern my style after him.” As they posed together for photos before the game, Ford joked, “You make me feel like an old man.”3

A crowd of 62,397 watched Joe DiMaggio throw out the first ball from his box seat next to the Yankees dugout.4 Ford struck out the Reds leadoff batter, Don Blasingame, but Eddie Kasko hit a changeup5 to left field for a single. Pinson followed with a drive to deep center. Maris, shifted to center field in place of the injured Mantle, turned and caught the ball 400 feet from home plate.6 Ford fanned Robinson to end the inning.

In the Yankees half of the first, Bobby Richardson led off with a single and Tony Kubek walked. After the first two pitches to Maris were balls, Hutchinson visited the mound to talk to his young pitcher. “He was a little unsettled and was letting the ball go too soon, making him wild high,” said the Reds manager after the game. “I just wanted to calm him down because he had real good stuff.”7 O’Toole retired Maris on a pop fly to the shortstop. After the next batter flied out to center, O’Toole walked Skowron to load the bases. Berra’s popup to second ended the threat.

Ford retired the Reds in order over the next three innings, recording six groundouts and three strikeouts. The only hard-hit ball was a smash by Gene Freese inside the third-base line in the second inning. Clete Boyer made a backhanded, diving grab and threw Freese out.8

O’Toole kept the Yankees scoreless until the bottom of the fourth. Leading off the inning, Howard drove a high outside fastball to right. Cincinnati right fielder Wally Post, positioned toward center for the right-handed batter, missed the ball by 18 inches as it curved into the front row of the right-field stands for a home run. “I wanted Howard’s pitch outside,” said O’Toole after the game, “but not that high.”9 Later in the fourth, the Yankees had runners at first and second and two out. Cincinnati shortstop Kasko made a leaping one-handed catch of Ford’s line drive to end the threat.10

With the score 1-0 in New York’s favor, Post led off the Reds fifth inning with a single and, after a fly out to left, took second on a groundout. But the inning ended when he was tagged out trying to make it to third on a grounder to Boyer.

With one out and the bases empty in the bottom of the sixth, Bill Skowron hit O’Toole’s first pitch, a high curve, over 400 feet into the stands in left-center field. “I had gotten him out the time before on a curve,” said O’Toole. “I thought I’d give him another one just tempting enough to make him swing. It was too tempting.”11

Up 2-0, Ford allowed only one baserunner over the final three innings. With one out in the seventh, Robinson, who barely checked his swing on a 3-and-2 pitch, walked.12 The closest the Reds came to a hit was with two out in the eighth. Dick Gernert, pinch-hitting for O’Toole, hit a shot in the hole between third and short. Boyer made a diving stop and threw from his knees to get Gernert at first.13 “When someone told me Cletis was a better fielder than his brother Ken,” remarked Hutchinson after the game, “I said, ‘that I have to see.’ Well, Cletis showed me today.”14

“Mr. Ford is the guy who did it,” said Houk during his postgame comments, “and don’t forget to give Mr. Boyer a big assist, too.”15 In going the distance in the 2-0 Yankees victory, Ford allowed just two hits and one walk, while striking out six. Only one Red — Post in the fifth inning — made it as far as second base. Hutchinson believed O’Toole, who walked four and gave up six hits, including three singles by Richardson, had pitched a decent game, but said, “The way Ford was pitching out there, there wasn’t a team in the world that could have beaten him.”16

The win was Ford’s record eighth World Series victory, one more than former Yankees Red Ruffing and Allie Reynolds. His 27 consecutive scoreless innings left him only 2⅔ innings short of Babe Ruth’s record of 29⅔ consecutive scoreless innings.17 Reflecting on his third fall classic shutout in a row, Ford said, “It was my best Series game. Unlike my two shutouts against the Pirates last year, I didn’t have many runs to work with. It was one of those happy days when I had both good stuff and control.”18

6 “Ford Is Surprised by Pinson’s Power.”

10 “Ford Is Surprised by Pinson’s Power.”

13 “Hutch Gets Aboard Boyer Band Wagon.”