This article was written by Matt Faltas 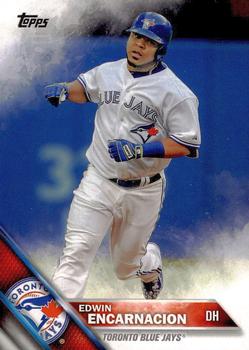 Bottom of the 11th. Runners at first and third. One out. Edwin Encarnacion digs in at the plate,1 ready to have one of the most memorable plate appearances of his career. Ubaldo Jimenez takes a deep breath and looks at catcher Matt Wieters for the sign as 49,934 people inside a cramped Rogers Centre create a ground-shaking cheer. But before we analyze what happened here in the American League wild-card game, why don’t we take a look back and see how we got here?

After a grueling 162-game season, the Boston Red Sox finished triumphantly with a 93-69 record, giving them their eighth American League East title. The Blue Jays and Orioles tied for second with records of 89-73, but the Blue Jays got home-field advantage for the wild-card game because they won the season series with Baltimore, winning 10 of 19 games.

The starter for the Orioles was Chris Tillman, who allowed only 19 home runs in 172 innings pitched and held batters to a .244 batting average against him. Marcus Stroman got the nod from Blue Jays manager John Gibbons.2 TBS on-field reporter Sam Ryan said of Stroman, “He might be little, but he’s a little stick of dynamite.”3 Comparing the records and ERA of Tillman and Stroman would probably show Stroman as the big underdog. However, Stroman’s strikeout/walk ratio was about a full point better than Tillman’s during the 2016 season.4

Stroman quickly showed his effectiveness against the Orioles, wrapping up the second inning by striking out power hitter Chris Davis. In the bottom of the second, Toronto’s José Bautista homered to left field to start the inning, giving the Blue Jays a 1-0 lead.

Stroman faltered in the fourth. Adam Jones singled and took second on a groundout to first. Blue Jays center fielder Kevin Pillar made a leaping catch of Manny Machado’s liner to preserve the Toronto lead, but the next batter, Orioles designated hitter Mark Trumbo, who led the major leagues in 2016 with 47 home runs, followed Machado with a two-run blast to give the Orioles the lead.

The Blue Jays answered back in the fifth inning. Michael Saunders hit a ground-rule double to left field, and Pillar, on a 1-and-2 count, swung at a pitch outside the strike zone and hit the ball to right field, where Orioles right fielder Michael Bourn was caught in between a running catch and a dive and the ball bounced. Saunders, who was holding at second, made it only to third, but center fielder Ezequiel Carrera singled him home to even up the game at 2-2.

The Blue Jays threatened to walk it off in the bottom of the ninth after a double by Josh Donaldson and an intentional walk to Encarnacion. Orioles pitcher Brad Brach suddenly found himself in a huge jam, with nobody out and the team’s 2016 campaign on the line. Bautista dug in at the batter’s box, hoping to carry the Blue Jays to the ALDS. Brach got ahead 1-and-2. The next pitch was a slider that just caught the low and outside corner. With one out, Darren O’Day entered the game to face Russell Martin. The Orioles had a much-needed sigh of relief when Martin hit a grounder to Orioles third baseman Machado, who started a 5-4-3 inning-ending double play.

In the 10th inning, Pillar was robbed of a double as the speedy Orioles center fielder Adam Jones made a running catch of his line drive. Then came the bottom of the 11th inning. Orioles All-Star closer Zack Britton, who had held opponents to only four earned runs and one home run in 67 innings during the regular season, remained in the bullpen, as Baltimore manager Buck Showalter called for Jimenez. (Perhaps it was an effort to save Britton’s arm for later in the postseason). After the game, Showalter noted that Jimenez had been on a hot streak at the end of the season.5

After only four pitches, Jimenez had given up back-to-back singles to Donaldson and Devon Travis, and Toronto had runners at the corners. Encarnacion walked up to the batter’s box with the fans screaming. He swung at the first pitch and history was made. Encarnacion launched a three-run home run into the left-field bleachers off of a 91 MPH four-seam fastball.6 Everyone knew the game was over as soon as the ball hit Encarnacion’s bat, as Encarnacion hoisted his bat in the air and the crowd erupted. As he rounded first base, Encarnacion high-fived Blue Jays coach Tim Leiper. Before he touched home plate, he fist-bumped Troy Tulowitzki and added another high-five with Dioner Navarro.

This meant that the Blue Jays would play the Texas Rangers in one ALDS. The other would be the Boston Red Sox squaring off against the Cleveland Indians.

The Blue Jays and Indians both swept their way through the Division Series and met in the ALCS to determine the American League pennant winner. In that best-of-seven series, the Indians dismantled the Blue Jays in five games in a truly lopsided ALCS. The Blue Jays managed to score more than two runs in only one game. In Game One, even though the Blue Jays outhit the Indians, Cleveland won 2-0 on a two-run home run by Francisco Lindor on a two-strike count. In Game Two, a 2-1 Indians victory, Lindor again played the hero role as he delivered a go-ahead single off J.A. Happ in the bottom of the third inning. In Game Three the Blue Jays left two runners in scoring position, the difference in a 4-2 Indians win. The Blue Jays had their backs against the wall in Game Four and their season on the line again. Aaron Sanchez pitched a gem, giving up only one run through six innings. A one-run lead turned out to be big enough for the Jays bullpen, as Brett Cecil, Jason Grilli, and Roberto Osuna pitched the seventh, eighth, and ninth innings respectively while combining for no hits and four strikeouts. Game Five proved to be a tough one for the Blue Jays: a 3-0 shutout. This sent the Indians to the World Series, where they blew a 3-games-to-1 lead over the Chicago Cubs, ending the Cubs world championship drought.

Despite the downer at the end, Encarnacion’s postseason heroics will not be forgotten for a long time by Blue Jays fans.