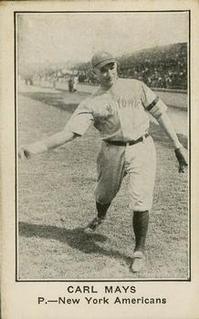 Through 2019 the New York Yankees have played in 225 World Series games. On October 5, 1921, they appeared in their first, against the New York Giants. This was the first time the entire World Series was played in one ballpark; the venue was the Polo Grounds.1

An article in the Washington Post described the game: “Speed and resourcefulness, always attractive in any sport, backed by the wonderful pitching of Carl Mays, won a 3 to 0 victory for the Yankees in the first game of the first intercity world’s series that ever came to New York.2

The Giants owned the ballpark; the Yankees were their tenants. For the first game of the Series, the Giants were the home team as 30,203 fans made their way through the gates in the first week of October. The Yankees had finished the season with a record of 98-55, 4½ games in front of the Cleveland Indians, while the Giants finished 94-59, four games ahead of the Pittsburgh Pirates.

Just before the batteries were announced, the crowd stood at attention while the band played “The Star Spangled Banner” and Giants players placed a wreath on the monument of Eddie Grant, the former Giants player who lost his life in France in World War I.3

The game opened with a single by the Yankees’ Elmer Miller. Roger Peckinpaugh sacrificed Miller to second base. Babe Ruth singled off Douglas and Miller scored to give the Yankees a 1-0 lead.

Other than a two-out single by Frankie Frisch, Mays encountered no problems in the first inning. The second inning was hitless and scoreless although Douglas walked Aaron Ward and Mays hit Johnny Rawlings with a pitch.

In the Giants’ half of the fourth inning Frisch led off with a single, stole second, and went to third base on a sacrifice by Ross Youngs. Mays got out of this bit of trouble with a strikeout of High Pockets Kelly and groundout by Irish Meusel; the Yankees still had their 1-0 lead.

In the top of the fifth inning the Yankees’ Mike McNally, one of four former members of the Boston Red Sox in the Yankees starting lineup that day,5 led off with a double to left field. He took third on a sacrifice by Wally Schang. Douglas struck out Mays and with Miller at bat, “Douglas wound up. So did McNally, and Miller got set. The first ball was delivered, a rather high pitch. McNally darted for the plate. Catcher Frank Snyder had to reach up for the pitch, swooping down in an attempt to nail the wriggling, sliding McNally, who successfully stole home plate to give the Yankees a 2-0 lead.”6

Mays got three groundball outs in the bottom of the fifth. Peckinpaugh led off the top of the sixth with an infield single toward Dave Bancroft, the Giants shortstop, and with Ruth at bat, he went to second on a passed ball. Ruth struck out but then there was a bit of mishap involving Yankees right fielder Bob Meusel, brother of Irish Meusel, the Giants’ left fielder.

“[Bob] Meusel sent a mighty whack to the fence in left-center field. The blow sent Peck scurrying to the clover with the third and final run, but in the riotous enthusiasm of the moment Meusel overlooked the slight detail of touching first as he whizzed around the towpath. This lapse cost him a highly desirable triple, but, as long as it scored a run, the lapse was soon forgotten. Mays at that moment needed another tally almost as badly as John D. Rockefeller needs another dime.”7  In the Giants’ half of the sixth, Mays allowed a two-out triple to Frankie Frisch but then got Ross Youngs to ground out to Peckinpaugh.

Both pitchers worked clean innings in the seventh and eighth. Jesse Barnes took over on the mound for Douglas in the Yankees’ ninth. He got Meusel to pop out to second base and Wally Pipp to ground out to Kelly for the second out. Then Ward singled and McNally singled him to third. McNally stole second base. But Barnes was able to put an end to the threat by striking out Schang.

Mays allowed a leadoff single to Frisch in the ninth — his fourth hit of the game. But Mays finished strong, getting Youngs to ground into a force out and Kelly to ground into a 6-4-3 double play that ended the game.

Besides Frisch’s triple and three singles, the only other Giants hit was a single by Rawlings with two outs in the seventh inning. For the Yankees, McNally had two hits, including a double, and two stolen bases. Mays’s win was his third in World Series play after two victories for the 1918 Red Sox but the final postseason win of his career. He lost Game Four of the 1922 World Series to the Giants, 4-3.

Cullen Cain of the Washington Post summed it up: “Mays shut the Giants out with his underhand ball and his perfect pitching was the distinctive feature of the struggle. The Yankees made three runs behind Mays and yet, but for friendly fates, the visitors would not have scored a run in this close and tense contest. Shufflin’ Phil Douglas pitched almost as good a game as Mays, but he was unlucky. It looked to me as though Rawlings should have picked up Miller’s hard grounder near second on the first play of the series. But he let the ball get away and the official scorer gave Miller a hit.”8

Cain added, “To my mind, the most fascinating feature of the game to see was sitting there behind home plate watching that ball come up from Mays’ hand as big as a basketball and with nothing on it at all except that deceptive delivery. I doubt if Mays put a thing on a half dozen balls during the contest. How did he do it? Psychology and control. It was that underhand motion that ruined the Giant batters before the ball started on its way.”9

In addition to the game story and box scores cited in the Notes, the author consulted the Baseball Reference.com and Retrosheet.org websites.

1 Besides this World Series, three others have been played in one ballpark: The same two teams met at the Polo Grounds again in 1922, and the St. Louis Cardinals and St. Louis Browns met at

Sportsman’s Park III in 1944. The Cardinals and Browns shared their ballpark. In the pandemic-altered 2020 postseason, all games of the World Series were played at Globe Life Field in Arlington, Texas, home of the Texas Rangers.

4 Saves were not recognized as an official statistic until 1969, but have been retroactively calculated and reported for prior seasons.

5 The other former Red Sox in the starting lineup besides McNally were Babe Ruth, Wally Schang, and Carl Mays.