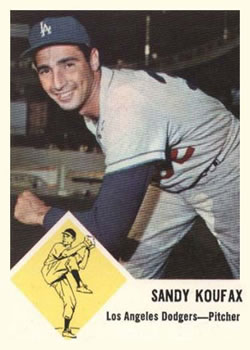 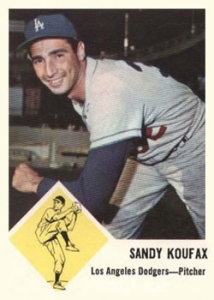 As the New York Yankees arrived at Dodger Stadium for the fourth game of the 1963 World Series, they knew no team had ever come back from a three-game deficit to win. “The knowledge of defeat could not be disguised in the quiet but calm Yankee clubhouse,” wrote the New York Times’s Leonard Koppett after the third game.1

Days before, as the Yankees’ team bus left for the airport and Los Angeles, third baseman Clete Boyer joked that what the Yankees needed was more Jewish holidays. “You mean like Yom Koufax,” said Mickey Mantle.2 Now they would have to face Sandy Koufax, the Los Angeles Dodgers’ Jewish left-hander who had set a strikeout record beating them in Game One. Before they left their hotel that morning, the Yankees packed their bags, at once a standard practice and a foreshadowing.3

A mild fall afternoon with temperatures in the high 70s greeted Koufax and the Yankees’ Whitey Ford, meeting in a rematch. With the exception of Hector Lopez, subbing for the injured Roger Maris in right field for the Yankees, it was the same lineup as that game, a 5-2 Dodgers victory.

Hidden from the Yankees was an open sore between the last two toes of Koufax’s left foot, the one he used to push off from the mound. A corn had torn off two days before and had not healed. Dodgers team physician Robert Kerlan had given the area a shot of novocaine and the trainer was primed to give him more if needed. It was not.4

As with all the games in this Series, there was a premium on runs. As the Dodgers came up in the bottom of the fifth, they had managed one single. The Yankees had a single and a double. Nobody had any runs. With one out, Frank Howard came to the plate and launched the first home run ever hit into the second deck down the left-field line, a blow estimated at 450 feet.5

Koufax set the Yankees down in the sixth and got Tom Tresh to pop out leading off the seventh. But Mickey Mantle, limited to a fluke bunt single so far in the series, launched a Koufax fastball over the 380-foot sign in left-center to tie the score. It was Mantle’s 15th World Series home run, tying him with Babe Ruth for the most round-trippers in Series history. The Yankees had never led a game the entire Series and now had barely edged into a tie.

The tie lasted five batters. Koufax shut out the Yankees in the rest of the seventh inning. Jim Gilliam led off the Dodgers’ seventh with a high bouncer to Boyer, who leapt high in the air to glove the ball, came down, and launched a belt-high throw across the diamond. The throw hit first baseman Joe Pepitone on inside of his right forearm and bounced down along the right-field stands. Gilliam wound up at third and scored on Willie Davis’s sacrifice fly to give the Dodgers a 2-1 lead.

“It was a perfect throw. I didn’t see it. It got lost in the shirts behind third base. It hit me on the side of the glove and wrist and went on by,” said Pepitone of the game’s crucial play.6

There was one final bit of drama in the Yankees’ ninth. With two outs and Bobby Richardson on first, Elston Howard hit a groundball to Maury Wills, who threw to Dick Tracewski for the force out. Koufax leapt off the mound, hands high in the air, nearly reaching third base before realizing Tracewski had dropped the short hop and Richardson was safe. Koufax returned to the mound and got Hector Lopez to ground slowly to Wills. This time, Tracewski held on to the throw. This time Koufax kept leaping and was joined by his teammates.

“I don’t feel anything – I’m numb,” said Koufax afterward.7 His teammates were focused on a larger picture. “They won’t call us choke artists any more,” said Gilliam, harking back to the Dodgers’ epic collapse at the end of the 1962 season, which had haunted them through 1963.8 “This makes up for last year,” echoed Johnny Podres. Asked to compare this game with his victory over the Yankees in the seventh game of the 1955 World Series, Podres exclaimed: “Damn right it’s better than ’55. Why, you just can’t beat those guys four straight.”9

The Sporting News was awed. It was “pitching that bordered on the fantastic,” wrote Fred Lieb, “[w]hile Ralph Houk’s versatile New York Yankees entered the Series as odds-on favorites, the Dodger victory was hardly an upset. The sweep, though, came as a shocker.”11 The Dodgers weak offense had taught them how to manufacture runs against good pitching. It was a skill the Yankees had never had to learn.

Mickey Mantle joined in the praise. “I never saw pitching like that. In our league, we see good pitching for a game or two, but never for four straight games. These guys are the best I have ever seen.”12

Those guys were also few in number. Alston used only 13 players in the four games – eight basic position players plus Ron Fairly, three starting pitchers and one inning of relief from Ron Perranoski. With the pinch-hitters and relief pitchers necessary for come-from-behind tactics, Houk used 20. The four games took a total of 8 hours and 17 minutes.

The 55,912 people in the stands that day pushed total series attendance to 247,279 and total gate receipts to $1,995,189.09, There was also $3.5 million from NBC and Gillette for television rights.13 The players’ share came to $1,017,546.43 with the Dodgers passing out full shares worth $12,794 and Yankees disbursing $7,874.32 per share.14 Both were the largest ever. Because the Series went only four games, the commissioner’s office, and the two leagues would not participate in the receipts. The teams would take home smaller amounts. Nevertheless, Dodgers owner Walter O’Malley would describe the sweep as his greatest thrill in baseball.15

Summed up Red Smith: “An hour and a quarter after the game, the eleganti still lapping it up in the stadium club overlooking right field saw a gaggle of young men in business suits emerge from the dugout and trudge toward an exit gate. Most of the Yankees, for it was indeed they, wore black. All walked ever so slowly as to – hell, write your own simile.”16

In addition to the sources mentioned in the Notes, the author consulted Baseball-Reference.com, Retrosheet.org and the following books, video, and digitized box scores:

4 “Sandy Won Decider with Ulcerated Toe,” Los Angeles Times, October 8, 1963: B2. In The Sporting News of October 19, 1963, Bob Hunter reported that the drug used was morphine. The information is on page 2 in a story that begins on page 1 with the headline “Couldn’t Be Done – But Dodgers Did It.”

8 Bob Hunter, “Couldn’t Be Done – but Dodgers Did It,” The Sporting News, October 19, 1963: 1. In 1962 the Dodgers had a four-game lead as late as September 17, then faded into a tie with the San Francisco Giants. The Giants won a three-game tiebreaker series to take the 1962 NL pennant.