This article was written by Brent Heutmaker

The Detroit Tigers’ dreams of their first World Series title were evaporating after a tough 4-3 Game Six loss in the 1934 World Series. The St. Louis Cardinals were favored in Game Seven and ticket demand wasn’t as strong. The sun shined bright and a cool northeast wind blew in over the right-field wall at Navin Field.

Detroit player-manager Mickey Cochrane complained about Game Six: “The Cards did not beat us, Umpire Owens did. I was safe at third in the sixth, but Owens had me out before I hit the bag. That was the turning point in the game. We had Daffy Dean on the run and would have finished him. But the umpire stopped us. We were beaten by an umpire and hitters like (Leo) Durocher and Dean.”1

After Game Six, both Cochrane and pitcher Lynwood “Schoolboy” Rowe were treated at a hospital.Numerous reports circulated about Cochrane's ailments. He had been spiked for the second time.“They want to play that way, we’re ready to fight back, he said.”2

Rowe’s right hand had swelled after a dispute with a door. Apparently the bruise was made worse after Rowe shook hands with comedian Joe E. Brown. Management’s story was that Rowe had a swollen hand from stopping a ball. The problem was that no one remembered a play where Rowe stopped a ball. There was also a rumor that Rowe had tried to punch a Cardinals player.

The 24-year-old had planned to marry Edna Skinner immediately after Game Six, provided Detroit won. Skinner was writing a guest column for a Detroit newspaper about being the fiancée of a World Series player. The Cardinals bench used it as fodder for taunting Rowe constantly.

Rowe said of the handshake and the taunts, “Joe E. Brown the comedian wasn't so funny when he rushed over to me before the game to shake hands. He gripped my pitching hand like a longshoreman and I fear he dislocated a knuckle. At least it felt that way while I was pitching. The Cardinals didn't bother me in the least by chanting, ‘Come on, Edna.’ referring to my fiancée.”3

No pitcher had thrown a complete World Series game and started again the very next day.Until the injury, Cochrane was hoping Rowe could start two consecutive games. Some writers thought General Crowder might start. Instead, the skipper went with Elden Auker.

Cardinals player-manager Frankie Frisch said, “I'll give them (Bill) Hallahan or Dizzy (Dean) tomorrow and we'll win the Series.”4Dizzy Dean wanted to start. “Who’s going to pitch for the Tigers?” he said.“They’d better put ’em all in there.”5

Dean mocked Rowe’s injury: “There ain’t going to be no alibi, though, understand that. And we ain’t shaking hands with nobody.”6

One of the quirks of Detroit’s Navin Field was that all players had to pass through the Tigers dugout to reach the playing field. Numerous Cardinal players stopped in front of Detroit’s bench to scrape their spikes on the concrete. They also mocked Cochrane, asking, “How is our stricken leader?”8

Already, rough play and disputes with umpires had marred the 1934 World Series. The trend continued in Game Seven. A seven-run third inning by St. Louis removed any doubt about the final outcome.

In the sixth inning, Joe Medwick hit a ball to the center-field fence. Thinking triple all the way, he tore around the bases and slid safely into third base. The cloud of dust that erupted may have caused some of the discrepancies about the incident. Some observers thought Detroit third baseman Marvin Owen stepped on Medwick or kneed him. Medwick may have kicked back with either one or both feet at Owen’s legs. Others thought both players kicked at each other.

“Medwick held out his hand to Owen. The Tigers third baseman refused it petulantly and returned to his station, observed sportswriter Paul Gallico.”9

Medwick later said, “I didn't mean to harm anybody but I don't want anybody to kick me. I offered to shake hands with Owen on the spot but he wouldn't do it. He walked away and turned his back.”10

A single by Ripper Collins scored Medwick. After the inning ended, Medwick returned to his left-field position, where fans in the temporary left-field bleachers began throwing debris at him. Medwick headed to the safety of the infield and joked with teammates about it. Shortstop Leo Durocher and third baseman Pepper Martin began playing a pepper game with vegetables that had been thrown on the field.Cochrane ran out to left field in an effort to implore the crowd to calm down, but was unsuccessful. Medwick tried several times to return to left field. A loudspeaker announcement stated that the umpires would forfeit the game to St. Louis if the crowd didn’t stop throwing items. Head umpire Harry Geisel, however, later told sportswriter James Isaminger that he would have never allowed a forfeit under any circumstances.

After Medwick’s third failed attempt to return to left field, Geisel asked Frisch, “This is an exceptional case, so won’t you take Medwick out of the game?” Frisch refused. Geisel said, “Well, this is a case for Judge Landis.”11

During the entire Series, the umpires had made reports detailing players using profanity against each other. Medwick and Owen were called over to speak to Landis. Landis asked both players if the other had sworn at him, which they both denied. Landis told Medwick that he was out of the game and wouldn’t listen to Frisch’s protests. Chick Fullis replaced Medwick and was cheered when he ran to left field. The entire incident lasted about 20 minutes. Due to an incident in the 1933 World Series, Landis had warned the umpires about ejecting players:

Before the series, the umpires are instructed not to put any player off the field unless the provocation is very extreme. I saw as well as everybody what Medwick did, but when Umpire Klem took no action and the players quieted down I hoped the matter was ended. But when it became apparent that the demonstration of the crowd would never terminate I decided to take action. I did not call Medwick and Owen in any attempt to patch up the difference between the players. I asked Owen whether he knew of any excuse why Medwick should have made such an attack on him. He said he did not, and with that I ordered Medwick off the field. I do not intend to take any further action.12

With so much at stake, I feel that only the most extraordinary circumstances should warrant action depriving either team of its full strength in the championship series.13

I made my decision in order to avert a demonstration leading to possible riot and injury and to protect Medwick from violence. At the same time Medwick admitted kicking Owen, while Owen denied kicking Medwick.14

I do not blame that crowd for what happened today although under the circumstances and due to the uncontrollable outburst I felt it was wisest to remove Medwick from the game. As I saw the incident at third base, Medwick came sliding hard into the bag, then kicked his feet up at Owen. I did not see Owen make any gesture previously toward Medwick but I do not say he didn’t. I have yet to find two men who agree on exactly what happened or who was to blame. When I finally called the players, managers and umpires to my box, I simply asked Medwick if Owen had done anything to him or if there was any reason for his kicking at the Detroit player. To both questions Medwick answered ‘No,’ Thereupon I decided to promptly remove him from the game, particularly as I felt that an even more dangerous outbreak might develop if Medwick continued to play.15

Frisch defended Medwick saying, “The kid wouldn't spike anybody. He was just sliding into third base.”16

Owen later said, “It is all over so far as I am concerned. I'm sorry it happened and I'm sorry Medwick was ordered out of the game.”17

The game ended with a whimper. Dizzy Dean allowed six hits and struck out Hank Greenberg three times. Dean threw 22 balls out of 98 total pitches. Six Detroit pitchers allowed 17 Cardinals hits including two by Dean. Every Cardinals starting player had at least one hit and scored at least one run.

Many Detroit writers blamed the umpires and Joe E. Brown for the Tigers’ loss. Detroit had to wait another year for that long-awaited first world championship. 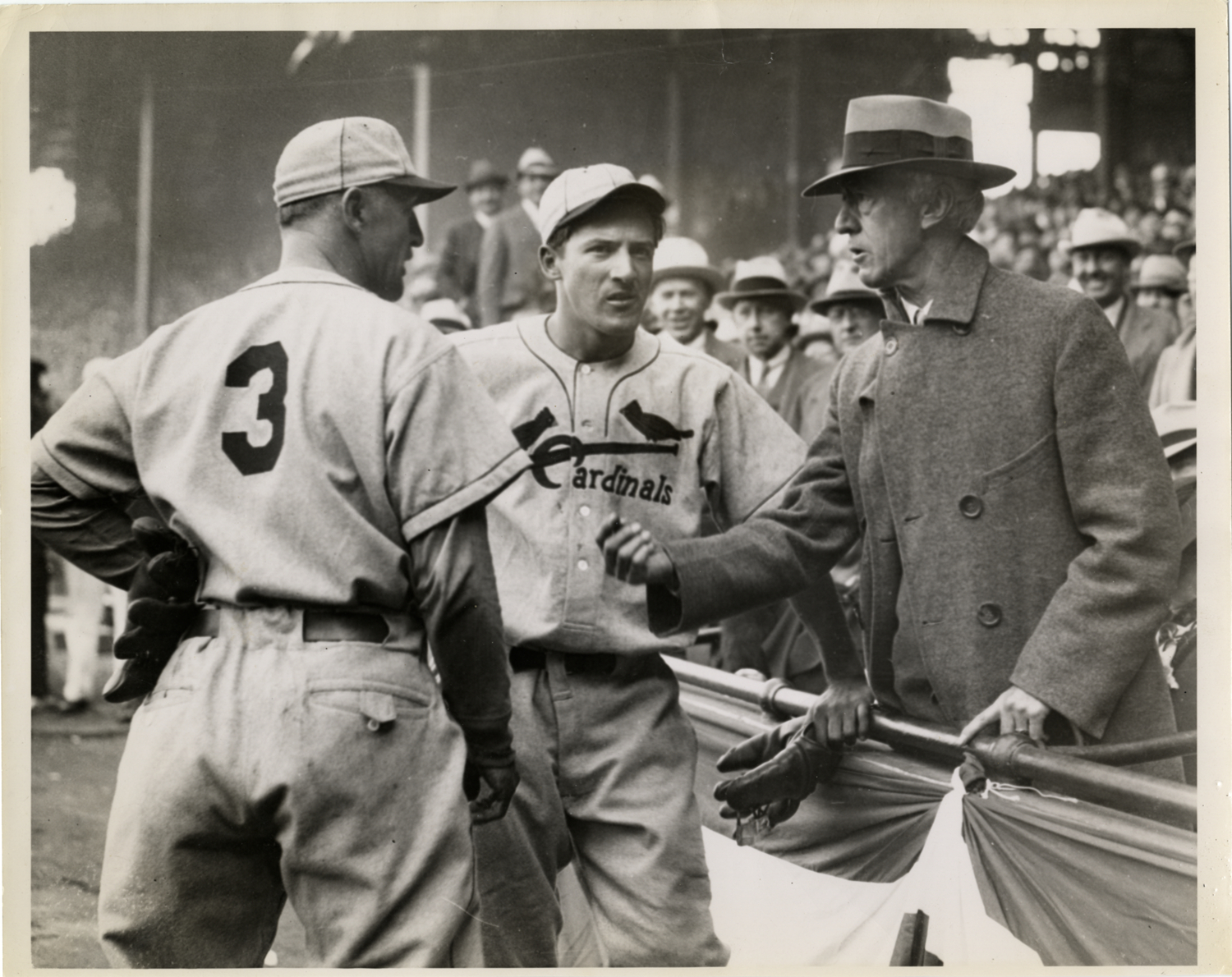