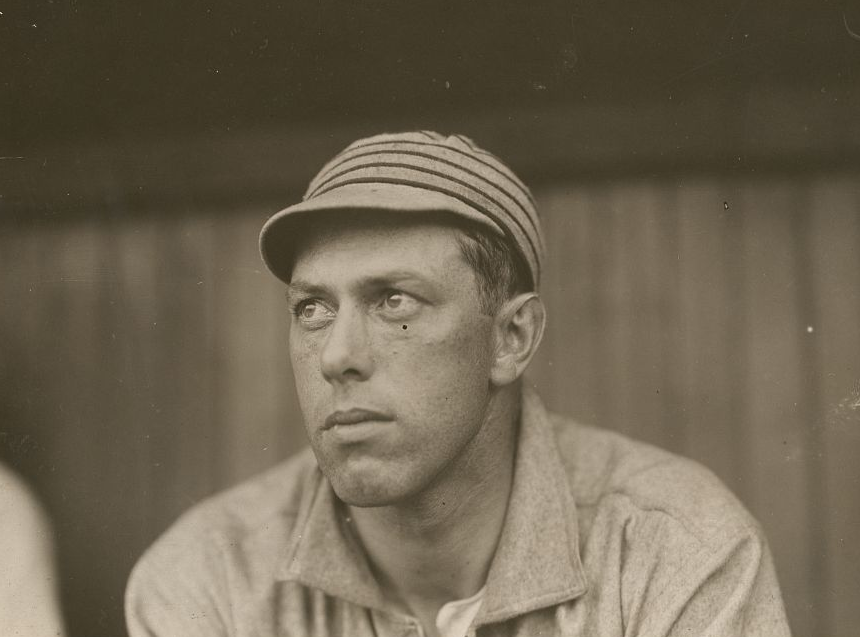 A doubleheader had been scheduled between the two clubs, and with the promise of good weather on the Saturday before Labor Day, a huge crowd of 18,0843 turned out, making it “necessary to string the ropes in the outfield.”4 The faithful were treated to a once-in-a-lifetime, record-setting game, which lasted 4 hours and 47 minutes, spanning 24 historic innings. When the final out was recorded, Philadelphia had defeated Boston, 4-1.

The “spectators were kept at fever heat all the time, and it increased as the game went on. … Phenomenal play succeeded phenomenal play in rapid succession, causing cheer after cheer from the crowd.”5 Great pitching and defense was rewarded by applause for both sides. According to the St. Louis Post-Dispatch, “The rejuvenated Plymouth Rocks, playing in old-time championship form since Jimmy Collins’ release as manager and under ‘Chick’ Stahl’s leadership, gave a flash of the old speed which twice made them world champions.”6 Further, “the Athletics, last year’s American League pennant winners, were in prime fettle [and displayed] brilliant pitching, fielding, and baserunning.”7

Philadelphia manager Connie Mack sent rookie Jack Coombs to the mound, even though he had pitched only two days earlier.8 The Athletics were in third place in the American League, 5½ games behind the Chicago White Sox. Boston skipper Stahl9 called upon Joe Harris to toe the rubber for the home team. Harris also was a rookie; he pitched in only three games in 1905. But he was a workhorse in 1906, though he brought a dismal 2-17 record into this game. The last-place Boston Americans were 34 games out of first. On a positive note, they were riding a three-game winning streak.

Runs would be hard to come by in this contest. Although Boston put runners at the corners in the bottom of the second with one out, they did not score. Philadelphia notched the first tally, in the top of the third, “on two scratch singles and a stolen base.”10 Coombs reached on a dribbler as Harris slipped trying to field the ball. To help his own cause, Coombs stole second base and advanced to third on a groundout. Bris Lord pulled a groundball to first baseman Moose Grimshaw, and as Grimshaw flipped the ball to Harris covering the bag, Lord beat the throw, with Coombs scoring the run. Boston answered by pushing a run across the plate in the bottom of the sixth inning. Freddy Parent tripled to the right-field fence and came home on a single by player-manager Stahl. A scoreless tie then ensued for the next 17 innings.

Coombs “was coolness itself and it mattered not how good was the batsman who faced him.”11 He seemed to find a way out of trouble, especially in extra innings. Boston put the leadoff batter on base in the 12th, 14th, 19th, 20th, and 21st innings. In the 14th and 15th, Boston had a runner on second with no outs, and in the 15th and 18th innings, the Americans had a runner at third with one out. The runner never scored. The best example of Coombs’s coolness took place in the bottom of the 18th. Opposing pitcher Harris fouled out to the catcher and then Coombs walked Jack Hayden. Parent reached on a single, with Hayden advancing to third base. Coombs then loaded the bases by issuing a free pass to Stahl. The Philadelphia hurler “was equal to the emergency, and struck out [Hobe] Ferris and [Jack] Hoey.” When Coombs went to the bench, “the crowd arose and gave him a remarkable ovation, in spite of their disappointment at the failure of the Bostons to score.”12

Finally, the Athletics broke the game open, as Harris “weakened a little in the twenty-fourth inning of the heart-breaking struggle.”13 Both Boston and Philadelphia had wanted to stop after the 23rd inning was completed, but the umpire urged them to play on.14 Coombs led off by striking out. Topsy Hartsel singled and stole second base while Harris struck out Lord for the second out. Osee Schrecongost15 singled (he tried to avoid a ball thrown near his head, and as he turned away, the ball hit his bat and ricocheted into center field), and Hartsel raced home with the go-ahead run. Socks Seybold followed with an RBI triple, and Danny Murphy banged another triple to plate Seybold. Boston went quietly in its half, although Grimshaw did reach on a single, and “the great crowd got away as darkness was shutting down the field.”16

In the marathon, Coombs walked six and Harris allowed only two bases on balls. Coombs fanned 18 of the locals, including his opponent Harris four times. Harris collected 14 strikeouts against the visitors, including Hartsel and Monte Cross three times each. According to the box score in the Philadelphia Inquirer, the Athletics batted 82 men, getting 16 hits, while Boston had 77 at-bats and 15 hits.17 As Bill Nowlin wrote in his biography of Joe Harris, “Pitch counts were apparently for sissies.”18 Philadelphia’s masterful catcher, Doc Powers, controlled his pitcher and helped the cause, as he threw out five of six would-be base stealers. He even caught two runners (Hoey and Red Morgan) in the same (seventh) inning.19 Harris set a one-game record by pitching 20 consecutive scoreless innings.20 Coombs pitched two more complete-game victories for Philadelphia in the next 10 days.21

Athletics third baseman John Knight had homered in each of his two previous contests and in this game “made the splendid record of five hits in succession, two of them being triples.”22 Yet none of his hits resulted in a run. He finished the game with a 5-for-7 performance. For Boston, Parent was the hot hitter, with a 4-for-10 day. He fell a home run short of a cycle in the losing cause. Hoey had two hits in his 10 trips to the plate; Powers caught him both times trying to steal second base.

This was the third extra-extra-inning game between the Athletics and Americans in the past few seasons. On July 9, 1902, Philadelphia defeated Boston 4-2 in 17 innings, and on July 4, 1905, Philadelphia again prevailed, by the identical score of 4-2, in a 20-inning affair (and this was the second game of a doubleheader). Needless to say, the second game of the September 1, 1906, doubleheader was canceled. Because it was late in the season, the game was not rescheduled.

With the victory, Philadelphia picked up a game on Chicago, but the Athletics could not catch the White Sox and finished the season in fourth place. Boston, American League pennant winners in 1903 and 1904, finished dead last in 1906, 45½ games behind Chicago.

In 1906, each game had just one umpire, and in this historic battle, it was veteran Tim Hurst. He was on his feet for the entire game and “deserved congratulations for the success of his efforts.”23 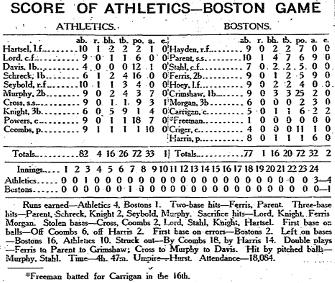 In addition to the sources mentioned in the Notes, the author consulted Baseball-Reference.com and Retrosheet.org. Accounts of the game came from various newspapers.

8 Young Coombs did not make it out of the first inning in that previous contest.

15 Schrecongost had entered the game in the 11th inning as a pinch-hitter for Harry Davis.