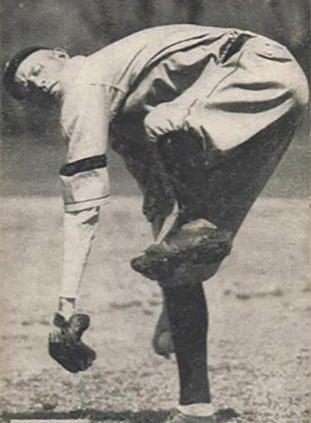 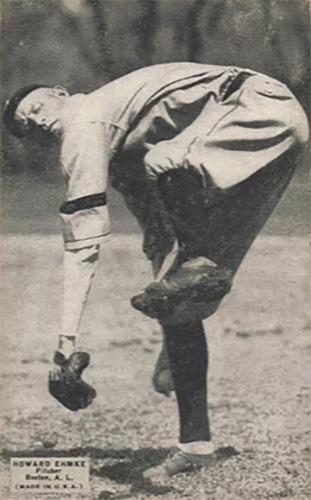 On September 7, 1923, Boston Red Sox right-hander Howard Ehmke no-hit the Philadelphia Athletics at Shibe Park, winning 4-0 while walking just one batter. There was one Red Sox error, by left fielder Mike Menosky, and Boston turned a double play, meaning that Ehmke faced just one batter over the minimum 27. To make his day even more impressive, Ehmke, a new acquisition by the Red Sox in 1923 who had been pitching in the majors since 1915, had two hits as a batter in the game.

Four days later, on the same road trip, the 29-year-old Ehmke nearly equaled his Philadelphia feat, one-hitting the New York Yankees during Yankee Stadium’s first season, a 3-0 Red Sox win. New York got its only hit in the first inning, by leadoff batter and center fielder Whitey Witt. Once again Ehmke helped himself with his bat; he was 3-for-4 in this game, and his seventh-inning run batted in was what proved to be the game-winning hit.

Like Ehmke’s no-hitter in Philadelphia, his near-miss in the Bronx was marked by official scoring controversy.1

The game featured the first-place Yankees – on their way to their third consecutive American League pennant and first-ever World Series championship – at their new home, leading the second-place Cleveland Indians by 14 games. The Red Sox – with five championships over the preceding 20 seasons – were dead last, a full 35½ games behind New York. And they were five games behind the seventh-place Athletics.

With four weeks to go in the season, there were 26 games remaining on Boston’s schedule, including seven doubleheaders, mostly makeups of earlier postponements for a club whose scheduling options were limited by Massachusetts’ prohibition of Sunday baseball. After Ehmke’s no-hitter in Philadelphia, the Red Sox had lost three in a row to the Yankees, by scores of 6-2, 4-0, and 8-1. Boston’s lineup, completely turned over from their most recent title winner in 1918, managed just 11 hits over the three games.

Facing Emhke in this Thursday afternooon game was rookie right-hander George Pipgras, working in just his third major-league game and his first starting assignment. He was without a win or a loss, with only four innings of relief work under his belt.2 With one out in the top of the first, he walked the next two batters, but Red Sox right fielder Ira Flagstead’s liner to Wally Pipp at first base was turned into an unassisted double play.

The first batter for the Yankees in the first was Witt, and he reached on an infield single to third base. It was the first hit against Ehmke in 10⅔ innings, since Joe Judge of the Washington Senators singled on September 3. It was also the Yankees’ last hit of the game.

Right fielder Babe Ruth – who had hit home runs in each of the last two games, giving him 35 for the season – grounded to Joe Harris at first, and Harris nabbed Dugan in a force play at second base. Pipp grounded out to second, ending the inning.

Pipgras retired the Red Sox in order in the top of the second. Ehmke walked catcher Wally Schang with two outs in the second, but shortstop Everett Scott hit into a force play at second base.

With one out in the third, Ehmke singled off Pipgras. Two other batters walked, with a foul popup between them. But with the bases loaded, Flagstead grounded back to Pipgras, who threw to first for the final out. Ehmke struck out the first two Yankees in the third and Dugan lined out.

Both sides were retired in order in the fourth.

In the top of the fifth, Pipgras gave up another single – just the second Red Sox hit of the game – again by Ehmke, but nothing came of it. Back on the mound, Ehmke retired the Yankees in order again.

Reichle singled to lead off the Boston sixth and was sacrificed to second. He tried to take third on Harris’s grounder to short, but was retired on Scott’s throw and Dugan’s tag. Shanks’ groundout ended the Red Sox’ mild threat.

In the bottom of the inning, Ehmke retired Pipgras on a grounder to second base, then struck out the next two batters. The game was scoreless through six.

The Red Sox finally broke the deadlock in the seventh. With one out, second baseman Norm McMillan singled to center, giving the Red Sox a baserunner for the third inning in a row.

Ehmke came to bat, already with two hits to his credit. McMillan tried to steal second, and Schang’s throw struck him on the shoulder and went astray; McMillan took third on the error.

Ehmke then connected on his third hit of the game, a single to left field that scored McMillan for the game’s first run. One out later, catcher Val Picinich took two balls, then hit the ball into left-center field for an inside-the-park home run that scored Ehmke and made it 3-0, Red Sox.

The next two half-innings were three-up, three-down, and the Yankees came to bat in the bottom of the eighth still without a run and with only one hit. The first batter was second baseman Aaron Ward and Ehmke hit him with a pitch. After Schang flied out to center, Scott lined back to Ehmke, whose throw to first doubled off Ward.

Pipgras walked two Red Sox in an otherwise uneventful top of the ninth, and Ehmke took the mound to try to close it out. Harvey Hendrick pinch-hit for Pipgras and hit a fly ball to Reichle in center. Witt grounded out, short to first. Dugan grounded out, second to first. The game was over, a 3-0 win for Ehmke, a one-hitter.

Afterward much of the focus – and debate – was on Witt’s lone Yankee hit. One newspaper said Witt had hit a “puzzling bounder toward Shanks which he cuffed with his glove, and recovered too late to retire the fast Witt.”3 That sounds as if the call could have gone either way – base hit or error.

Boston sportswriter Gus Rooney, however, writing on page one of The Sporting News, under the headline, “Boston Also Resents Way of Scoring Hits in New York,”4 called it a “questionable hit” and wrote that Shanks “fumbled the ball.” Rooney added, “Some of the official scorer’s fellow scribes on New York newspapers wrote that Ehmke rightfully had a no-hit game, but that on account of a quick decision it was taken away from him.”

Still, Ehmke had thrown back-to-back shutouts and set the major-league record for fewest hits allowed in consecutive starts, a mark that he held until Johnny Vander Meer of the Cincinnati Reds pitched back-to-back no-hitters in June 1938.5 Ehmke as of 2022 still held the American League record.

Four days later, on September 15, Ehmke earned his 19th win of the season, despite giving up six runs (and eight hits) while beating Cleveland, 11-6. His 20th win followed four days after that, when he beat the Chicago White Sox, 2-1, a six-hitter.

Ehmke’s back-to-back pitching gems in 1923 were, in the words of the New York Times, “not merely miraculous pitching: it constitutes the greatest exhibition of box-work in the history of baseball.”6 While reporting that “most of the crowd believed” they had actually witnessed a second no-hitter for Ehmke, but that the official scorer had ruled it a base hit, the Times declared that “the play was correctly scored as a single and the official scorer, also correctly, refused to reverse his decision later.”7

The Boston Globe called it a “fluky bingle,” saying that it “took a mean hop and was scored as a hit after striking Shanks on the chest. Had the official scorer been a little more liberal it could have been charged as an error.”8

The job of an official scorer is not an easy one, but it’s the scorer’s job to make the call as they saw it.

1 An account of Ehmke’s no-hitter by SABR’s Gregory H. Wolf, titled “Ehmke’s No-Hitter Saved by Baserunning Blunder and Official Scorer’s Change of Heart,” is included in Gregory H. Wolf, ed., From Shibe Park to Connie Mack Stadium: Great Games in Philadelphia’s Lost Ballpark (Phoenix: SABR, 2022). Dr. Wolf notes that Ehmke allowed what appeared to be a sixth-inning double to the opposing pitcher, Slim Harriss, but Harriss was ruled out at first for failing to touch the bag on his way to second. Two innings later, the scorer initially ruled Frank Welch’s line drive to left a base hit but changed the call to an error on Menosky, who failed to make the knee-level catch. There was some discrepancy between newspapers as to how quickly the scorer changed his decision – immediately, or only after the game. It was certainly not a matter of a scorer favoring the home team.

2 Pipgras pitched in parts of 11 big-league seasons. He’d been initially signed by Boston, but his contact was sold to the Yankees in January 1923. He worked for the Yankees until a transaction in May 1933 sent him back to the Red Sox. His best year was 1928, when he led the AL in wins with a 24-13 record, starting a majors-leading 38 games.

3 “Ehmke Held Yanks to 1 Hit,” Fitchburg (Massachusetts) Sentinel, September 12, 1923: 8. Reports in other papers say it was first baseman Harris who “cuffed” the ball, recovering it too late to get the speedy Witt. The Boston Herald wrote that the ball struck Shanks “in the chest and rolled toward second base. Before Shanks could retrieve the ball, Witt, a fast man, had beaten the throw to first.” The Herald added that Red Sox manager Frank Chance “admitted that it could have been called either a hit or an error.” “Scratch by First Batter Keeps Ehmke from Second Consecutive No-Hit Game,” Boston Herald, September 12, 1923: 22. The Associated Press story declared Shanks “the victim of [a] crooked hop.” Associated Press, “Ehmke Almost in Unparalleled Feat,” Worcester Gazette, September 12, 1923: 15. Burt Whitman’s column of September 13 said, “The Red Sox feel to a man that Howard Ehmke deserved to be credited with a no-hit, no-run game.” Burton Whitman, “Red Sox Positive That Ehmke Deserved No-Hit Game Against Yankees,” Boston Herald, September 13, 1923: 20.

5 In his first no-hitter, on June 11, 1938, the left-handed Vander Meer blanked the visiting Boston Bees at Cincinnati’s Crosley Field, 3-0, walking three and striking out four. Four days later, on June 15, he no-hit the Brooklyn Dodgers at Ebbets Field, walking eight batters in a 6-0 win and striking out seven. In neither game did the Reds commit an error. He pitched complete games on both sides of the back-to-back no-hitters, a three-hit, 4-1 home win against the Giants on June 5 (he’d given up a single in the ninth) and a 4-1 four-hitter in Boston on June 19. The first hit came in the fourth inning. He’d thus thrown 21 consecutive innings of no-hit ball.

7 That said, the Times suggested that if the play had happened in the eighth or ninth inning, it “would have been scored as an error.” “Ehmke Holds Yanks to Scratch Single.”