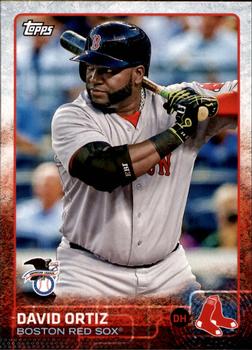 David Ortiz was gunning for home run number 500 as the 2015 season wound down. The 500 Club wasn’t as exclusive as it had been when Ortiz reached the majors with the Minnesota Twins in September 1997, a season after Eddie Murray became its 15th member. Since then, 12 more sluggers had reached the milestone, most recently Albert Pujols in 2014. Still, it was a crowning achievement that most of the other 20,000-plus major leaguers could barely dream of.

After his own 2014 season was in the books, Ortiz, who turned 39 that November, had 466 homers to his credit – including 11 walk-off home runs. He had an additional 17 postseason home runs, two of them walk-off homers in the Boston Red Sox’ magical 2004 postseason.1

Heading into 2015, Ortiz began to get asked more frequently about 500. He struck an appropriately modest tone. “Everybody is talking about it. That’s not something I think of. I don’t want to put that kind of pressure on myself. But if you look at history, not too many guys have done that. So, sure, I would like to do that. I go into every year wanting to hit at least 30 home runs. I could hit a couple extra.”3

Ortiz hit four homers in April, but only two in May. In June he hit seven. By the All-Star break, he had added two more. That put him at 481, and he could see he had a shot at 500. Five more followed in the second half of July.

After hitting three homers in a four-game stretch in early August and reaching number 489, Ortiz said, “To be honest, I try not to think about it. When I’m hitting, I’m just trying to put a good swing on the ball.”4 Thinking about the goal might cause him to lose focus, to falter. His batting average for 2015 was .273, not much below his ultimate career .286 mark, and higher than the .263 he had hit the year before.

In August 2015 Ortiz hit nine homers to run his career total to 495. There were 31 games left on the Red Sox schedule.

Red Sox fans were paying attention. In mid-August the team was in last place, 12½ games behind the Yankees. Bob Ryan wrote in the Boston Globe, “We can’t say that Big Papi’s quest for 500 career home runs is the only reason to pay any attention to the Red Sox for the remainder of the season. But there aren’t many others.”5

Ortiz hit number 496 on September 5 and number 497 the next day, the latter his 200th homer at Fenway Park.6 A three-run homer against Drew Hutchison of the Toronto Blue Jays on September 9 was number 498. Fans in the seats kept track with a banner that updated the number of homers as they increased.

Ortiz was playing “with both of his Achilles’ tendons heavily wrapped,” three years after an Achilles injury in 2012 limited him to one game after July, and acting Red Sox manager Torey Lovullo acknowledged that Ortiz needed the occasional day off: “He’s chasing something that’s pretty special. We’re all caught up in that moment. Sometimes I need to pull back and not get caught up so much in it.”7

After Ortiz hit number 498, Major League Baseball provided specially marked baseballs that were dispensed by the home-plate umpire when Ortiz was batting so that they could authenticate the ball that was finally hit for his 500th. It was then left to the team to negotiate with whatever fan may have caught the home-run ball.

The Red Sox were off on September 10. Ortiz had a single, a double, and a walk in five plate appearances in an 8-4 loss to the Tampa Bay Rays at Tropicana Field in the opener of a three-game series on September 11. He was going to have the night off on September 12, but he talked his way into the game – and hit home runs 499 and 500.

Left-hander Matt Moore started for manager Kevin Cash’s Rays. He’d been an All-Star with a 17-4 record in 2013, but after two brief appearances in 2014 required Tommy John surgery. He rehabbed and then returned in July 2015, after 15 months away from the majors, but was 1-3 so far with an ERA of 8.04 coming into the game.

In the top of the first, the Red Sox had runners on first and second following a Mookie Betts leadoff single and a single by shortstop Xander Bogaerts, with a fly-ball out by Dustin Pedroia in between.

Ortiz came up; it was his eighth plate appearance after his 498th career home run. On a 1-and-2 count, he hit Moore’s fastball for a three-run homer high in the air and into the right-field seats. It was homer number 499 for Ortiz.

Rick Porcello pitched for Lovullo’s Red Sox. He shut the Rays out through four.

Ortiz was first up for Boston in the fifth. On a 2-and-2 count, he hammered Moore’s curveball for home run number 500. It was a “432-foot blast that landed in the back of section 148 in right-center field.”8 The game was delayed several minutes as the Red Sox teammates congratulated their slugger.

“I’m going to take a lot of pride in that,” Ortiz said after the game, which closed out as a 10-4 win for Porcello, who improved his record to 8-12.

Ortiz singled in the seventh inning, too, before being replaced by a pinch-runner. His two home runs gave him 33 for his career at the Trop. The only road park in which he had hit more was Rogers Centre – like Tropicana Field the home of an AL East division rival – with 39. He’d hit 59 homers against Toronto and these two made 48 against the Rays.

But, most importantly, David Ortiz had joined the 500-home-run club.

“You never want to be on that side of history,” said Moore afterward. “I’m going to see that swing quite a bit for the next however long. Didn’t execute. Same thing as his first at-bat.”9

As with Pujols, just the year before, Ortiz had hit both 499 and 500 in the same game. They are the only two batters to reach 500 with a two-home-run game, though on August 10, 1971, Harmon Killebrew had hit number 500 and then added number 501 later in the game. It was Ortiz’s career 50th multihomer game.

Kevin Cash, a teammate of Ortiz’s in 2007, 2008, and 2010, said, “Pretty special. Obviously, 500 home runs, that puts you in an elite class. But just the person David has been in that organization, the way he treats everybody. It’s a special moment for him.”10 Moore said he wasn’t upset at the delay after the home run. Yes, he wanted to get right back up on the mound, but “That guy means a lot to his club. You could tell by the way they greeted him at home plate.”11

Ortiz reportedly wore a black cap with a Superman logo on it to his postgame press conference.12

“Unbelievable,” Ortiz said as he departed the ballpark. This is not something you ever expect to do.”13

In 2022 Ortiz was the only player the Baseball Writers Association of America voted into the National Baseball Hall of Fame.

This article was fact-checked by Stew Thornley and copy-edited by Len Levin. Thanks to John Fredland for supplying the Tampa Bay newspaper accounts.

1 For a good summary of Ortiz’s 23 walk-off base hits, including one homer and two other hits for the Twins before he came to the Red Sox, see Bill Chuck, “Remember Every Walk-Off Hit of David Ortiz’s Career,” Boston.com, October 15, 2016. https://www.boston.com/sports/boston-red-sox/2016/10/15/every-david-ortiz-walk-off/.

12 Peter Abraham, “Ortiz Homers Twice to Reach 500,” Boston Globe, September 13, 2015: C1. Abraham said the ball was caught by a man from Virginia who asked to remain anonymous, but the fan – wearing an Orioles jersey – was the beneficiary of a nice package of gifts provided by the Red Sox in exchange for the ball. See Nick Cafardo, “Ball, and Spirits, Were Sent Soaring,” Boston Globe, September 13, 2015: C1, C5.