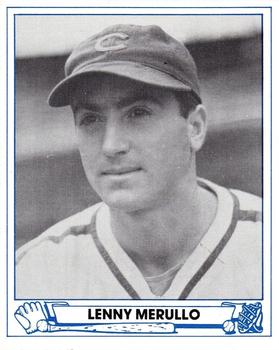 Many fathers refer to the birth of a child as one of their most memorable days. That was the case for shortstop Lennie Merullo on September 13, 1942, when his son Lennie Jr. was born. But it was also a day Merullo would just as soon forget, after he committed four errors in one inning for the Chicago Cubs against the Boston Braves. Yet baseball history would not forget it, because Merullo tied the major-league record for most errors in one inning.1

The Cubs signed Merullo off Villanova University’s campus in 1939. He was immediately labeled “Billy Jurges’ Double,” regarded as the Cubs’ eventual replacement for their dependable shortstop Jurges, who had been traded to the New York Giants after the 1938 season.2

Merullo had a dubious start to his career in the field, committing 68 errors in the minors in 1940 and 72 in 1941. Because he hadn’t proven himself as an offensive threat in the minors, he was initially labeled a “good field, no hit” type of player in the minors. It seemed improbable that he would earn a hard look in the majors, but the Cubs brass thought he was better than he had shown.3

Merullo made his major-league debut with the Cubs in 1941 when he played seven games during the last month of the season and hit .353. He made a good showing in spring training the next season and won the starting job at shortstop after Bobby Sturgeon became injured. In his first 27 games through May 15, Merullo was hitting a respectable .284 with 16 runs scored. Enamored with his rookie shortstop, Cubs manager Jimmie Wilson said, “He is the best looking shortstop to come into the National League since Billy Jurges made his appearance. He can go to his right or left and can cover as much ground as Jurges. He has a better arm and can hit as well.”4

Merullo had his highs and lows during the season. He had six hits in a doubleheader against the New York Giants on July 12. Eleven days later, he was temporarily benched because he was slumping at the plate.5 Through September 11, Merullo was batting .258 with 2 home runs and 37 RBIs.

With an off day on Saturday, September 12, Merullo took a bus from New York (where the Cubs had played the Giants) to his Boston home, where his wife was expecting their first child. He arrived shortly after she delivered a 7¾-pound baby boy at 5:00 A.M. on Sunday, September 13.6 Even with the loss of sleep from traveling, he played in the doubleheader against Boston that afternoon.7

While the Brooklyn Dodgers and St. Louis Cardinals were battling for first place, the Cubs and Braves were mired in the second division. Their twin bill was inconsequential in the standings, yet 7,743 fans still found a reason to attend.

Boston won the first game handily, 11-6, as Tom Earley pitched a 10-hit complete game. Merullo started at shortstop and went 1-for-4 with a run scored. He committed an error in the sixth inning.

Merullo’s error spree happened in the bottom of the second. With one out and the game scoreless, he misplayed Clyde Kluttz’s groundball. Ducky Detweiler followed with a single, and Merullo fumbles the return throw from the outfield, allowing Kluttz to reach third and Detweiler to land on second.

After a walk to Whitey Weitelmann loaded the bases, Spahn struck out for the second out. But Merullo then booted consecutive ground balls by Tommy Holmes and Skippy Roberge, giving the Braves a 2-0 lead.

Spahn struck out five of the first eight batters he faced but took a pounding in the third inning, as the Cubs scored five runs on five hits for a 5-2 lead. Because of an error by Detweiler at third, four of the runs were unearned.

With three consecutive two-run innings, including a go-ahead home run by Max West, the Braves clawed the lead back, 8-7, in the sixth, but the Cubs mounted another five-run attack in the seventh against relievers Lou Tost and Manny Salvo. Merullo singled and scored in the rally.

The game was called at the end of the eighth because of Massachusetts’ Sunday curfew, with the Cubs winning, 12-8.

Merullo was 1-for-4 with a single, a walk, and a run scored. Outside of the disastrous second inning, he handled three chances without an error.

The Cubs outhit the Braves, 17-11, and survived seven errors. Spahn didn’t look like the Hall of Famer he would eventually become, as he gave up six runs (although only one was earned) on 10 hits and two walks in five innings. Fellow rookie Johnny Sain, who paired with Spahn to win 39 games for the pennant-winning Braves in 1948, pitched an inning in relief.

Merullo tied the major-league record with his four errors in one inning. The other verified occurrences prior to Merullo involved Washington’s Bill “Shorty” Fuller on August 17, 1888,8 and New York Giants infielder Lewis Whistler on June 19, 1891.9 More recently, San Francisco Giants third baseman Bob Brenly made four errors in an inning on September 14, 1986.

The general supposition was that Merullo became distracted by the birth of his son as the day wore on. An equally plausible explanation for his lapses in the field could have been that he was just physically exhausted.

Cubs manager Wilson wasn’t too worried about Merullo’s bad inning. He said, “Those four errors won’t bother Merullo a bit. Beside the fact that Lennie had his new son, born this morning, on his mind, I shouldn’t be one to criticize Merullo because I once made three errors in an inning myself and three boots for a catcher is probably worse than four for a shortstop.”10

Merullo finished the season with the third-most errors (42) in the National League, behind Eddie Joost (50) and Danny Murtaugh (43). Despite the praises Wilson heaped on him as a fine-fielding shortstop, Merullo finished first or second for errors by NL shortstops three times in his seven-season major-league career. His fielding percentage was never greater than .949 for a full season, when the league average for all positions was between .971 and .976.

Lennie Jr., who acquired the nickname “Boots” at birth because of his father’s fielding blunders, embarked on a baseball career of his own. He was a star at Holy Cross University, where he played baseball and football. (One of his teammates in both sports was Mike Hegan, the son of former major-league player and coach Jim Hegan.) As a longtime scout for the Cubs after his playing career, Lennie Sr. became conflicted with recommending that the Cubs sign his son. He urged his son to consider other major-league teams in the event the Cubs didn’t make an offer. Following his father’s advice, Lennie Jr. accepted the Pittsburgh Pirates’ contract offer in 1962 that included a bonus “that may be closer to $60,000 than the announced $50,000.”11

Lennie Jr. played in the Pirates minor-league system from 1962 to 1964, never advancing above the Class A level. But the Merullo family baseball bloodlines didn’t end with him. Lennie Jr.’s son Matt was a major-league catcher with the White Sox, Indians, and Twins from 1989 to 1995, mostly in a backup role. Matt’s son Nick became the family’s fourth-generation professional player when he signed with the Baltimore Orioles as a nondrafted free agent in 2014. Nick played only one season, in the low minors.

6 They Were There: This Great Game Interview with Lennie Merullo,” https://thisgreatgame.com/lennie-merullo/. Accessed May 11, 2022.

7 The second game of the doubleheader had been moved up from its original date of September 15.

9 “Lost Again,” Brooklyn Daily Eagle, June 20, 1891: 2. There have been other reported instances of players making four errors in an inning. Further research by the author and others does not validate them. The September 17, 1942, edition of The Sporting News (“Bobbles Follow Baby”: 15) reported that Cleveland’s Ray Chapman committed four errors in one inning on June 20, 1914, although the game account in the June 21, 1914, edition of the New York Sun (“Peckinpaugh’s Long Clout Routs Naps: 2) indicates Chapman made three errors in the fifth inning and one in the seventh. The September 15, 1986, edition of the Sacramento Bee (“To Err Four Times Is Human”: 38) reported that Milwaukee’s Jimmy Burke committed four errors in one inning on August 27, 1901. The May 28, 1901, edition of the St. Joseph (Missouri) Gazette (“Philadelphia 8 Washington 3”: 10) confirms that the game in question was actually played on May 27, 1901 (not August 27) and showed only three errors charged to Burke, also indicating they were in separate innings.