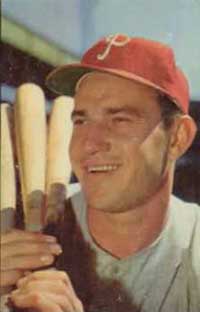 In one of the most thrilling games of a thrilling season, the Philadelphia Phillies rallied from a 5-0 deficit after five innings and a 7-5 deficit going into the bottom of the 18th to outlast the Cincinnati Reds 8-7 on a walk-off hit by Del Ennis that came just before curfew would have halted the elongated contest. The victory gave the Phillies a sweep of their doubleheader. Ennis’s fifth hit of the game gave Philadelphia a dramatic doubleheader sweep and a 7½-game lead in the NL standings.

The starter, Phillies ace Robin Roberts, was seeking his 20th win but struggled, handicapped by a porous Philadelphia defense. With one out in the first, shortstop Granny Hamner, “obviously weary in the field,”1 made two straight errors. With two Reds on, Roberts got Ted Kluszewski and Joe Adcock to hit two more balls at Hamner, this time for outs.

Cincinnati starter Howie Fox led the National League with 19 losses in 1949, but in 1950 would have the only winning season (11-8) of his nine-year career. Fox also allowed two baserunners in the first, on singles by Richie Ashburn and Ennis, but stranded both by retiring Jackie Mayo on a popup.

After Roberts enjoyed his only 1-2-3 inning in the top of the second, Hamner doubled in the bottom of the inning and Andy Seminick singled him to third base. Fox fanned Mike Goliat and got Roberts to pop to Kluszewski, then walked Eddie Waitkus to load the bases for Ashburn, but the outfielder also popped to Kluszewski to leave the sacks full of Phils.

In the third Fox himself scored the first run. He reached on Hamner’s third error of the game (his 44th of the season).  A single by Lloyd Merriman pushed Fox to second. After Grady Hatton struck out, Johnny Wyrostek hit one to Waitkus, who erred, allowing Fox to score. With runners on first and second and one out, manager Eddie Sawyer had Roberts walk Kluszewski intentionally, loading the bases for Adcock. His two-run single gave Cincinnati a 3-0 lead. Roberts struck out Connie Ryan with two runners in scoring position (Adcock had advanced to second on the throw to third to try to get Kluszewski), then got Virgil Stallcup on a fly ball to left to keep the score 3-0.

Cincinnati scored again in the top of the fifth on singles by Kluszewski and Adcock and a fly ball by Stallcup. The Phillies wasted a leadoff single by Waitkus in the bottom of the fifth and faced a formidable 5-0 deficit after five innings.

After Seminick grounded out to end the Philadelphia half of the sixth, Sawyer replaced him with Stan Lopata, probably figuring that 15 innings of catching in one day would suffice.  But Lopata would end up catching nearly as many innings during the day as Seminick.

Roberts got a 6-4-3 DP to end the top of the seventh, and Philadelphia broke through against Fox in the home half. Goliat doubled and one out later Waitkus reached on an error by Ryan to put runners at the corners. Both scored thanks to Willie Jones’s fly ball and a two-out RBI single by Ennis.

Having pinch-hit for Roberts and seeing his team trail 5-2 after seven in the second game of a doubleheader, Sawyer tapped 26-year-old Jack Brittin to make his major-league debut. Brittin pitched an easy eighth inning and even struck out Howell.

The Phillies crept closer in the bottom of the eighth thanks to a walk to Hamner, Goliat’s single, and an RBI single by Jimmy Bloodworth, batting for Brittin. After Bloodworth’s hit, Fox departed, making way for Ken Raffensberger. The former Phillies pitcher tied Preacher Roe and Johnny Sain with a league-leading 34 home runs given up in 1950, but he escaped the eighth by striking out Waitkus and retiring Ashburn on a groundout to allow Cincinnati to maintain its 5-3 margin.

For the ninth, Sawyer turned to Jim Konstanty, who made his record-setting 66th appearance of the season.2 After consecutive singles by Merriman and Hatton, Konstanty prevented the Reds from getting a critical insurance run by retiring the heart of the order, Wyrostek, Kluszewski, and Adcock, on two fly balls and a groundout.

The Phillies rallied in the bottom of the ninth after the lefty Raffensberger had fanned Jones. Righty Herm Wehmeier then relieved, and Ennis greeted him with a single. Ignoring the platoon advantage, Sawyer sent right-handed-batting Stan Hollmig up for the left-handed-hitting Mayo. Hollmig doubled to put the tying runs in scoring position. Hamner’s double tied the game at 5.  Lopata walked, but neither Goliat nor Konstanty could deliver a winning hit.

Konstanty got Cincinnati in order in the top of the 10th. Philadelphia threatened in the bottom of the inning. Waitkus singled. Ashburn forced him at second, then stole second. But Jones and Ennis, the two top RBI men of the 1950 Phillies, could not plate Ashburn.

Neither team had a hitter reach again until Waitkus doubled with two outs in the bottom of the 12th. Wehmeier got Ashburn to fly out.

Konstanty retired 14 Reds in a row before Howell singled with two outs in the top of the 13th, but Wehmeier grounded out to Hamner.

Cincinnati had two baserunners in the 14th on walks to Hatton and Kluszewski (the latter intentionally). The strategy succeeded this time as Adcock popped out to Hamner.

Having failed to win the game with a hit in the ninth, Konstanty singled in the bottom of the 14th but did not score.

The top of the 16th played out similarly to the top of the 14th. With Hatton on second after his single followed by a groundout, Konstanty again passed Kluszewski intentionally and again retired Adcock on an infield grounder to end the inning.

In the bottom of the 17th with one out, Waitkus doubled off Wehmeier for the second time in extra innings but again did not score.

Going into the 18th, the teams had played eight scoreless innings. After fanning Wehmeier to start the top of the inning, Konstanty got tired and wild, walking Merriman, Hatton, and Wryostek to load the bases with one out for Kluszewski. Konstanty came after the slugger and the big man delivered a single that gave the Reds a 7-5 lead. Adcock then bounced into a double play to end the inning. Cincinnati again needed to secure three outs and give up less than two runs to win.

Wehmeier came out for the bottom of the 18th and gave up double to Ennis and a single to Dick Sisler to put the tying runs on the corners with none out. Hamner drove in Ennis with a fly ball, Philadelphia still trailed 7-6 with one out and Sisler on first. Lopata, the fill-in catcher, “then delivered one of his best hits of the year, a resounding triple to right center, scoring Sisler with the tying run.”3 With Lopata on third, Reds shortstop Stallcup “made a nice play on Goliat’s grounder”4 and threw him out at first, holding Lopata at third. Having already used Konstanty for 10 innings, Sawyer pinch-hit with Ken Silvestri, who flied out to end the 18th in a 7-7 deadlock.

Replacement Blix Donnelly yielded a leadoff double to Connie Ryan to start the 19th but retired the next three Reds, finishing with teenager Ted Tappe, who had debuted with a homer against Brooklyn on September 14 but in this game grounded out batting for Wehmeier.

Eddie Erautt came in to pitch for Cincinnati with the 1:00 A.M. curfew looming. Waitkus singled. Ashburn dropped “a beautifully placed bunt down the first base line that stayed fair,”5 and Jones walked to load the bases with none out for Ennis. “The seconds were ticking off the clock as Ennis batted — the count went to two and two and then Del connected.”6 His drive less than one minute before curfew cashed in Waitkus for the sensational sweep.

2 “All-time king of the bullpen, Jim Konstanty … broke the major league record for most relief appearances in a season when he participated in his sixty-sixth game in the 19-inning nightcap with the Reds, September 15. The old record of 65 games pitched in a season, none started, was been set by Ace Adams of the (New York) Giants in 1945.” “Konstanty Breaks Adams’ Record With His 66th Stint,” The Sporting News, September 27, 1950: 32.