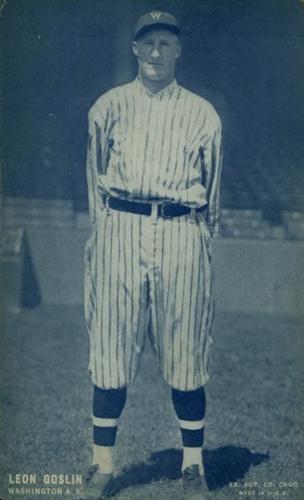 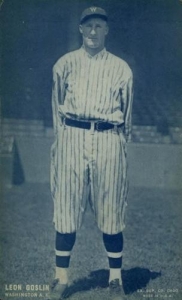 He was known for his ability to hit, and he could hit for power. He possessed a strong throwing arm. He was also known for his free spirit and misadventures off and on the field. When he arrived in Washington as a rookie at the raw age of 20, he came with fanfare and a nickname. Leon Allen Goslin would always be known as Goose Goslin once Washington Star sportswriter Denman Thompson observed the way the rookie flapped his arms and took an erratic path when he chased fly balls.1

Goslin began his professional career as a pitcher with the Columbia Comers of the Sally League in 1920. But his great hitting ability made his manager want his bat in the everyday lineup, and that was how Goose Goslin became an outfielder. During the 1921 season, Goslin caught the eye of Washington Senators scout Joe Engel, who arranged for his purchase on July 14 with an understanding that he would finish the Sally League season in Columbia before reporting to Washington. “Goslin will make good at once,” assured South Carolina sportswriter Johnny Banks.2 Goslin, described as a natural hitter, finished the minor-league season with a league-leading .390 batting average, established a league record for most hits in a season (214), and finished second in the circuit in home runs. (16).

Hearing about Goslin’s credentials had Washington sportswriters and baseball fans anxiously waiting for his expected debut on September 13, but he failed to arrive on time. “The fact that Goose Goslin did not appear in the lineup disappointed the fans,” wrote Denman Thompson.3

Goslin sent a wire to let the Senators know that he would arrive the next day – but he once again failed to appear. “He must be timorous about big cities, or something,” wrote Thompson. “He disappointed the fans again by his failure to arrive.”4 Goslin finally did arrive on September 14, but it was too late in the day to join his new teammates in a 6-1 exhibition win over Lefty Grove and the International League’s Orioles in Baltimore.

Two days later, Goslin was inserted into the fifth spot in the batting order and in right field in the Washington lineup for a game against Cleveland.

The Indians arrived at Washington’s American League Park on a six-game winning streak, after sweeping a doubleheader the day before in Philadelphia. After holding first place in the American League for most of the season, Cleveland had trailed the New York Yankees since September 1. The Indians came to Washington just a half-game behind New York. Their starting pitcher was George Uhle, who had a 14-11 season record and had snapped the Senators’ 11-game winning-streak on August 6.

The midseason winning streak had boosted the Senators to third place, 10 games over .500. But a slump of 15 losses in 17 games as August turned to September dropped the Washingtonians under 500. Heading into the game against Cleveland, they owned a 69-70 season record.

Washington starting pitcher Eric Erickson, who entered this game with a 7-9 season record, retired the visitors in order in the first. In the bottom of the first, Washington’s shortstop and leadoff batter Donie Bush walked but was erased when Cleveland shortstop Joe Sewell swiftly fielded Bucky Harris’s grounder, stepped on second, and threw to first for a twin killing. Joe Judge then ended the inning with a foul fly out to left field.

With one down in the Cleveland second, Larry Gardner singled, but the next batter, Sewell, struck out swinging. Catcher Val Picinich grabbed the third strike and fired to first baseman Judge in time to catch Gardner for a double play, ending the inning.

Goslin got his first major-league at-bat in the bottom of the second. The Washington crowd greeted him with cheers. But Goslin swung at the first pitch and lifted a fly ball to left field for an easy out. The next batter, Bing Miller, reached base on an error by Joe Sewell but was stranded when Howie Shanks lined out to end the inning.

Cleveland went down in order in the top of the third; in the Washington third, Picinich singled, but was then picked off. And when the next two Washington batters went down, the game was still scoreless after three innings.

In the top of the fourth, Charlie Jamieson lifted a pop fly behind the plate for what should have been an easy out. But Picinich muffed the catch for an error. Given a new life, Jamieson singled, and a sacrifice put him into scoring position, but both Smoky Joe Wood and Elmer Smith failed to advance him, and the game remained scoreless. The Senators went down in order in the bottom of the fourth.

Gardner started the top of the fifth with a walk and moved up a base on a sacrifice by Sewell. But once again, the next two Cleveland batters failed to produce.

Goslin led off the Washington half of the fifth. Swinging at the first pitch, he hit “a low looping drive that [Indians left fielder] Jamieson had no chance to handle,” for his first major-league hit.5 Miller’s sacrifice moved him to second, but he remained there when Shanks popped out to shortstop Sewell for the second out.

Next, Picinich grounded one between the shortstop and third baseman. Sewell scooted to his right and made the stop but had no chance to get Picinich at first base. Thinking he might head off Goslin heading for third, Sewell threw to Gardner, but too late. But the overenthusiastic Goslin rounded third without the slightest hesitation and kept running for home until he saw Cleveland catcher Steve O’Neill catch Gardner’s throw. “Then he started jockeying and was finally expunged” for the third out of the inning.6

After both teams went down in order in the sixth inning to keep the game scoreless, the Cleveland team must have known that it was missing a huge opportunity. If the Indians were looking at the out-of-town scoreboard, they would have noticed that the Yankees were losing to the Browns. If that score held up and the Clevelanders could break through against Washington, they would return to first place by evening.

In the top of the seventh, Cleveland got something going when Smith and Gardner singled to put runners on first and second with one out. But once again the needed clutch hit never came about. After Sewell popped out, Johnston grounded to first baseman Judge, who made a good stop and throw to force Gardner at second base for the inning’s third out. “It required speed and ability,” noted Denman Thompson. “Joe has both.”7

In the bottom of the seventh, Judge began the inning with a single to right field, and then Sam Rice sent a long drive to right-center that looked like “a triple at least,” wrote Cleveland sportswriter Francis J. Powers.8 Wood’s first reaction in center showed that he had misjudged the ball. He recovered and began to run toward the center-field wall. It looked as if Wood had no chance until a wind gust held up the ball’s flight long enough to allow Wood to make a “wonderful running one-hand catch.”9 On the next play, Judge was caught stealing, maintaining the deadlock for another inning.

The Indians finally broke through in the eighth. They once again put their leadoff man on base when O’Neill singled. The next batter hit into a fielder’s choice. Then came a walk and the second out of the inning.  But Wood, whose catch an inning earlier had kept Washington off the scoreboard, came through with a long drive to deep left-center field that fell for a hit and rolled to the occupied “Jury Box.” Both runners scored and Wood made it to third for a triple to give the Indians a 2-0 lead.

With one out in the bottom of the eighth, Shanks singled to center for Washington’s fourth hit of the game. But Uhle quickly canceled any hope of a rally by retiring the next two batters. In the bottom of the ninth the Senators closed out the afternoon by going down in order.

Meanwhile, the Browns won 10-3 at New York, behind Urban Shocker’s pitching and George Sisler’s grand slam. The Indians’ win, along with the Yankees’ loss, put Cleveland in first place for the first time since August 31, with 13 games remaining.

Despite Goslin’s delayed arrival and overly aggressive baserunning, he had found a home in Washington. He started every Senators game over the last two weeks of the 1921 season, batting .260 in 60 at-bats. Five days after his debut, on September 21, he hit his first major-league home run, off Red Faber of the Chicago White Sox. On September 25 he warmed the hearts of Washington fans by throwing out Detroit Tigers legend Ty Cobb, who tested the rookie’s arm by trying to score from first on a double. It was the beginning of an 18-season Hall of Fame career.