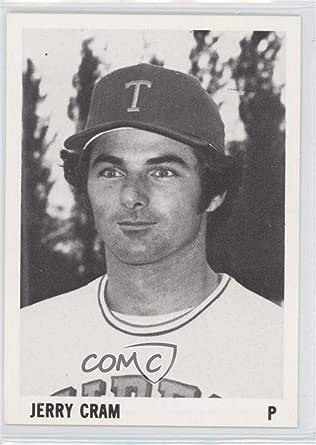 The 1975 season was a dreadful one for the Detroit Tigers, who went 57-102 and finished 37½ games out of first. At one point, they lost 19 games in a row, and volatile manager Ralph Houk faced assault charges for allegedly slapping a reporter in the clubhouse before a game against the Baltimore Orioles — which the team then lost.1

One level beneath the majors, the exact opposite happened: A team of Tigers minor-league farmhands had a season to remember in 1975 for all the right reasons. The Triple-A Evansville (Indiana) Triplets won the championship of the American Association, and with it the right to play against the International League champions in the Junior World Series. On September 16, before a hometown crowd of 2,621, the “Trips” became the final champions in the venerable minor-league postseason tournament.

The Triplets, managed by Fred Hatfield, were not overwhelming on paper. They didn’t lead the league in any major hitting or pitching category except saves.2 And they got off to a poor start, losing 19 games out of 23 during one stretch of May and June. Then the team clicked into gear, going 49-23 between June 22 and their division-clinching win on August 27. This hot stretch included a 10-2 record against the Indianapolis Indians, the former division leaders.3

Hatfield’s squad finished with a 77-59 record, winning the East Division by 5½ games over the Indianapolis Indians. They faced a tough opponent in the playoffs: The Denver Bears, a Chicago White Sox farm club, won the West with a league-best 81-55 record and placed five players on the league’s all-star team.5 But Evansville won two of three games in Denver, then won two of three at its own ballpark to advance to the Junior World Series.

In the International League, manager Joe Frazier’s Tidewater Tides, a Mets farm team, tied with the perennially powerful Rochester Red Wings for the regular-season championship. In a one-game playoff, a four-hitter by Tidewater’s Nino Espinosa gave the Tides the title with an 86-55 record. The Tides then knocked off the Charleston Charlies three games to none and the Syracuse Chiefs three games to one to claim the Governor’s Cup and a berth in the Junior World Series.6

The Junior World Series began September 11 at Tidewater with a 4-0 Evansville win, a four-hit shutout by the Triplets’ Mark Lemongello. After a rainout the next night, Evansville won again, 6-1, on the 13th. The Tides won Game Three in front of their home fans, 1-0, as a two-hitter by Laxton beat a six-hitter by Fidrych. The series shifted to Evansville, where the Triplets won 2-1 on September 15 behind strong pitching from Frank McCormack. This put the Triplets one game away from a Series victory when they took the field on the night of September 16. Lemongello (7-4, 3.87) was Evansville’s starting pitcher, while Tidewater countered with lefty Bob Myrick (3-0, 0.00 in seven games, all relief).

Sloppy first-inning play handed the visiting Tides a quick lead. With one out, Evansville shortstop Chuck Scrivener misplayed a groundball hit by designated hitter George Theodore. Left fielder Ron Diggle singled to right field, with Theodore taking third base and drawing a throw there. Diggle moved to second as the throw came in to third, and when third baseman John Gamble threw to second base, his throw bounced off Diggle’s chest and rolled away, allowing Theodore to score. Right fielder Benny Ayala followed with a grounder to Gamble, who threw wildly to first, allowing Diggle to score. One batter later, third baseman Randy Trapp singled Ayala home to make it 3-0, Tides.7

The score stayed there until the top of the fifth. Tidewater shortstop Mark DeJohn singled and Boisclair sacrificed him to second. Pinch-hitter Rick Miller, replacing the injured Diggle,8 drove in DeJohn with a single for a 4-0 lead. Ayala followed with another single that was misplayed by Evansville center fielder Art James, and Miller scored on the error to make it 5-0. Manager Hatfield then made one of his wisest decisions of the game: He called in left-handed reliever Tom Makowski, who struck out Tidewater first baseman Brock Pemberton to end the fifth inning.

A 5-0 deficit halfway through the game might have seemed foreboding, but the Triplets bounced back in commanding style in the bottom of the fifth. James — who went 4-for-5 — and Molinaro singled off Myrick, and designated hitter Marvin Lane cranked a 390-foot home run to left-center field to cut the deficit to 5-3. Later in the inning, Myrick walked catcher Kimm and was removed in favor of Espinosa. First baseman Ed Kurpiel then hit the Triplets’ second homer of the inning, this one to right, to tie the game at 5-5.9

Espinosa was still on the mound in the seventh when the Triplets went ahead to stay. Kimm and Kurpiel singled, then moved up a base on a wild pitch. Gamble, atoning for his errors of the first inning, singled Kimm in. Veteran Boots Day, playing right field for Evansville, brought home Kurpiel with a sacrifice bunt to make it 7-5. Evansville tacked on one more run in the bottom of the eighth off reliever Jerry Cram, though Cram had little to do with it. James singled, stole second, took third when Tides catcher Jay Kleven threw the ball away, and finished his trip around the bases after Boisclair threw wildly to third.

The Tidewater offense, meanwhile, closed up shop after the fifth inning. Makowski retired the final 13 Tides in order, striking out five. When the game ended at 8-5 after 2 hours and 17 minutes, he was the winning pitcher, while Espinosa took the loss. “I never saw a more deserving team,” Hatfield said after the game. “I’m very proud of these guys, the way they came off the floor and fought back.”10 Also after the celebration, five of the Trips got the highest possible reward: Manuel, Molinaro, Grilli, Scrivener, and pitcher Ed Glynn reported to the parent Tigers for the rest of the season.11

In December 1975 the International League voted not to continue the Junior World Series for various reasons, including financial problems, the harmful effects of late-season player recalls, and the limited availability of some ballparks after the start of football season.12 The history of the Junior World Series was already plagued by gaps: In fact, no tournament had been held the previous year because of the energy crisis.13 But the December 1975 announcement brought a permanent end to a competition whose roots went back to the Little World Series of 1904.14

Hatfield returned for one more season as Evansville manager the following year but couldn’t achieve the same magic, posting a 55-81 record. He then served on the Tigers’ coaching staff for two years before returning to minor-league managing posts. Fidrych, of course, lit up the American League the following year, going 19-9 with Detroit, winning the league’s Rookie of the Year award, and becoming one of the most beloved ballplayers of the decade. On the Tidewater side, the most noteworthy promotion went to manager Frazier, who was rewarded for his Triple-A success by being named the Mets manager for 1976. He held the job through the end of May 1977 before being dismissed.15

The city of Evansville hosted the Tigers’ Triple-A farm team until 1984, when it lost affiliated minor-league baseball altogether. Since 199516 the city has consistently supported the Evansville Otters of the independent Frontier League.

Neither Baseball-Reference nor Retrosheet provides box scores of minor-league games. I relied primarily on the September 27, 1975, and October 4, 1975, editions of The Sporting News, which between them published box scores and summaries of all five games of the Junior World Series.

2 The only category in which Triplets hitters led the American Association was hit by pitches, with 41. The Triplets’ pitching staff also tied for the league lead in fewest hit batsmen, with 23.

6 The Red Wings were a Baltimore Orioles affiliate, the Charleston Charlies were linked with the Pittsburgh Pirates, and the Syracuse Chiefs were the New York Yankees’ top farm club.

7 Unless otherwise noted, all play-by-play information is derived from Swanson.

13 The decision was made in the early weeks of 1974, when concern about the energy crisis was at a high level. Various sources, including “Sports Roundup,” Rochester (New York) Democrat and Chronicle, February 1, 1974: 3D, and “Tribe’s Home Opener April 20 Against Omaha,” Indianapolis Star, February 3, 1974: 3, 8.