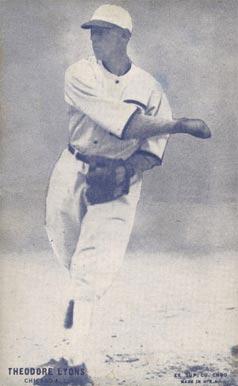 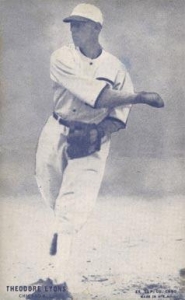 This blowout game is memorable in many ways, yet it was slightly tainted. The Washington Senators (or Nationals) were on their way to their second straight American League pennant.  The White Sox (72-70) were in fifth place behind the St. Louis Browns (74-66) and the Detroit Tigers (72-68), fighting for playoff money.

Washington won the first game of the September 19 doubleheader, 3-2. The second game featured Ted Lyons pitching versus Tom Zachary and started uneventfully: The White Sox were retired 1-2-3 in the first, and the Senators had only Sam Rice getting a walk. Rice had singled in his last at-bat of the second Washington-Detroit game on September 17, gone 4-for-4 during their September 18 10-5 victory over the White Sox, and gone 4-for-4 during the first game of September 19. Thus he had nine straight hits and then that walk.

The second inning changed the tone of the game. Earl Sheely tripled and Bibb Falk singled to score him. Johnny Mostil singled and Everett Scott’s error on Willie Kamm‘s batted ball loaded the bases. Ray Schalk singled, driving in Falk and Mostil as Kamm advanced to second. Ted Lyons sacrificed and Harry Hooper singled in Kamm and Schalk. Ike Davis struck out but Bill Barrett doubled, sending Hooper to third. Sheely, batting again, singled Hooper and Barrett home. Falk grounded out to end the inning. The White Sox now led the Senators 7-0, and Washington had only a Joe Harris walk in its half of the second.

Outside of Johnny Mostil’s leadoff single, the White Sox did not have any baserunners in the third inning. In the bottom half, after Muddy Ruel flied out, Spencer Adams pinch-hit for Zachary and walked. Sam Rice grounded out, ending his streak of nine consecutive hits (and the first-inning walk). Bucky Harris walked but Goose Goslin flied out to end the threat with the White Sox still winning 7-0.

Senators player-manager Harris might have had a premonition that his team was going to lose that day. However, it is more likely that he wanted to rest his players and give some of his scrubs some playing time. Spencer Adams replaced Harris at second base (but batted in the ninth spot since he had pinch-hit for Zachary) and John “Stuffy” Stewart replaced Ossie Bluege at third base. Allen Russell went into pitch, but replaced Harris in the second batting spot. Harry Hooper immediately reached on an error by Stewart who, until the day before, had not played in a major-league game since May 2, 1923, when he transiently was with the Brooklyn Dodgers. In fact, he had recently been purchased from Birmingham of the Southern Association. A double play and a popout ended the White Sox’ fourth, but with the Senators going out 1-2-3, Chicago still led 7-0 after four innings.

At the start of the fifth inning, Bobby Veach replaced Joe Judge in the batting order, but went to right field. Joe Harris moved to first base. After Sheely popped to Muddy Ruel, Falk singled and moved to second when Mostil walked. Kamm’s double scored Falk and Kamm scored when Ray Schalk singled. Schalk then stole second and scored when pitcher Ted Lyons singled: He went 3-for-5 with a double and two runs scored in this blowout. Hooper’s single sent Lyons to second and Davis’s single drove in Lyons. An error by Goose Goslin sent Hooper to third and Davis to second. A fly ball by Barrett scored Hooper and advanced Davis to third. Sheely singled to drive in Davis and Falk doubled to drive in Sheely. Bucky Harris then replaced Russell with Win Ballou. He had made his major-league debut on August 24 and had pitched only 16 major-league innings before this appearance. He next pitched on September 30 and never pitched in the majors again. Mostil had an infield single but Kamm grounded out and the White Sox had eight more runs.

In the bottom of the fifth inning, Spence Harris replaced Harry Hooper in right field, and became the third player named “Harris” to appear in this game. This was another 1-2-3 inning and the White Sox still led 15-0. So far, the Senators did not have a hit.

To start the sixth inning, Bennie Tate replaced Muddy Ruel at catcher. He was their third-string catcher and had caught in only nine games and pinch-hit in two. Ernest “Tex” Jeanes replaced Sam Rice in center: Until he was obtained from Birmingham of the Southern Association with Stuffy Stewart, and played in the August 25, 1925, game, he had not played major-league baseball since one game for the Cleveland Indians on April 21, 1922. Clyde “Buck” Crouse replaced Ray Schalk as the White Sox catcher. Officially he struck out, but he reached first on a wild pitch by Ballou that he had deliberately swung at. Then Ted Lyons reached on an error by Goose Goslin that sent Crouse to second. Spence Harris singled to load the bases. Davis walked with Crouse scoring and Lyons and Harris advancing. With no outs and the bases loaded, Barrett was called out on strikes. Sheely grounded out, scoring Lyons. Falk was called out on strikes, ending the top half of the fifth inning with the White Sox leading 17-0. Washington again went three up, three down.

When the White Sox’ seventh began, Earl McNeely replaced Goose Goslin in left field and Frank McGee replaced Joe Harris at first base. This was McGee’s major-league debut, and he would play only one more major-league game in his career (September 30, 1925). He had played mostly with Hamilton of the Michigan-Ontario League (Class B) that year. After Mostil and then Kamm grounded out, Crouse and Lyons singled, but Spence Harris struck out. The Senators’ seventh was another 1-2-3 inning, with McGee striking out in his first major-league at-bat. It was still 17-0 and the Senators were hitless.

In the top of the eighth, Davis grounded out, Barrett singled as did Sheely, but Barrett was out at third. Bibb Falk’s single advanced Sheely to second. Mostil walked to load the bases, but Kamm grounded out. In the Washington eighth, Adams got a walk. The game was going into the ninth inning with a 17-0 White Sox lead, and the pennant-bound Washington Senators remained hitless.

The White Sox’ ninth inning was uneventful, except for Ted Lyons’ double, his third hit of the game. In the bottom of the ninth, Hank Severeid pinch-hit for Ballou and grounded out. Then McNeely flied out. Former Detroit Tigers star Veach, who had only four hits in 20 at-bats after being sold to the Senators on August 17, singled to right to ruin the no-hitter. McGee then flied out to end game.

Would manager Bucky Harris have used all those rookies or bench players if the pennant had not been pretty much sewn up? Actually, Tom Zachary started more games than Stan Coveleski, Walter Johnson, or Dutch Ruether. Perhaps he would have used Allen Russell, but Win Ballou would still be questionable. He did quickly remove stars like Joe Judge, Ossie Bluege, Muddy Ruel, Sam Rice, Goose Goslin, and even himself. Everett Scott had been used at shortstop rather than the usual Roger Peckinpaugh. Stuffy Stewart, actually a second baseman, played third base. Steward, Tex Jeanes, Bennie Tate, and Frank McGee probably would not have been used if the game really mattered to the Senators.

The 17-0 blowout score is the highest of all time for a one-hitter. As of 2019 it has been done five times. On August 11, 1881, Fred Goldsmith of the Chicago Cubs pitched a one-hitter and beat the Detroit Wolverines, 17-0. On May 7, 1894, the Baltimore Orioles’ Tony Mullane combined with Jack Horner to pitch a one-hitter and beat the Washington Nationals, 17-0. On April 23, 1980, Bruce Kison of the California Angels beat the Minnesota Twins 17-0, and on September 17, 1995, Pat Rapp of the Florida Marlins beat the Colorado Rockies 17-0.

When Lyons lost his no-hitter with two outs in the ninth inning, it was the 15th documented time that happened. Through the end of 2018, it happened an additional 38 times. Also, there were no home runs by the White Sox. In blowouts of 17 or more runs, only 29 times has this happened.

In addition to Baseball-Reference.com and Retrosheet.org, the author also consulted: