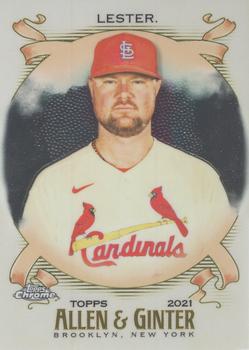 At the beginning of the 2021 season, left-hander Jon Lester was not expecting to take the mound for the St. Louis Cardinals that year. The Chicago Cubs had chosen to buy out his option year after six seasons in Chicago, leaving the 37-year-old Lester looking for a team. He signed a $5 million, one-year contract with the Washington Nationals before spring training 2021.1

Lester’s results with the Nationals were unimpressive: 3-5, with a 5.02 ERA. With the Nationals falling from the NL East race in July, general manager Mike Rizzo made six trades of veterans on July 29-30, dealing away 2019 World Series heroes along with several short-term Nationals, including sending Lester to the Cardinals for 25-year-old outfielder Lane Thomas.2

Injuries had depleted the Cardinals rotation; Lester and J.A. Happ, another veteran lefty acquired in a July trade with the Minnesota Twins, became the 11th and 12th pitchers to take starts for St. Louis in 2021.3 Lester was attractive to the Cardinals, who played in a division favoring left-handed pitching4 and also because he provided what Cardinals manager Mike Shildt described as battle-tested grittiness and competitive spirit.5

In his nine games for St. Louis before this start, Lester posted a 3-1 record with a 4.14 ERA, somewhat better than his record with the Nationals. His six-inning performance in an 11-4 win over the New York Mets on September 15 gave him 199 career wins, making his next start, against the Milwaukee Brewers on September 20, his first chance to notch number 200. Coincidentally, Lester had earned his 100th win on September 20, 2013 – exactly eight years earlier, when he was with the Boston Red Sox.

The Cardinals (79-69), winners of eight games in a row, were three games up for the NL’s second wild-card slot. At 11½ games behind the Brewers (91-58), the Cardinals weren’t catching Milwaukee for the NL Central Division lead, which made the wild card their only ticket to the postseason.

For their part, the Brewers were focused on their “magic number” to clinch their division – which was only three entering this game with 13 games yet to play. They were confident enough in their position to be advertising postseason tickets on their display behind home plate.

Freddy Peralta (9-4, 2.57 ERA) took the mound for the Brewers. The 25-year-old right-hander was an All-Star for the first time in his career in 2021. Against the Cardinals, however, he put his team in a hole almost immediately. After two quick strikeouts, Peralta allowed a base hit to Tyler O’Neill – and a home run to Nolan Arenado.6 Dylan Carlson singled, but Yadier Molina grounded into a fielder’s choice to end the inning with the score 2-0, Cardinals.

Lester made quick work of the Brewers in the first – three outs in the air on 10 pitches and he was back in the dugout.

In the top of the second, Harrison Bader hit a perfectly placed one-out double into the left-field corner. But the Cardinals couldn’t get him home – Lester tapped back to Peralta7 and Tommy Edman struck out for the second time.

The Brewers tied the game in the second. Avisaíl García hit a home run to center, setting the crowd of 28,291 to cheering and Bernie Brewer8 sliding down his chute. Two batters later, Luis Urías homered into the Brewers bullpen for a 2-2 tie.

After the Urías home run, Lester set down the next 10 batters in order, breaking the streak by allowing a harmless two-out single in the bottom of the fifth. Peralta was equally efficient, allowing only a fourth-inning single over the same span.

The Cardinals pulled ahead for good in the top of the sixth. O’Neill fouled a ball off his left shin. He walked it off, got back in the box and worked a walk – the first issued by Peralta. Seemingly unbothered by his shin, O’Neill took second on Arenado’s bloop into right, then scored the go-ahead run on Molina’s one-out seeing-eye single into left. Peralta limited the damage to one run; he struck out Edmundo Sosa and Bader, and pumped his fist as he jumped off the mound at the end of the inning.

Lester had been in the on-deck circle at the end of the fifth inning, with the third out sparing Cardinals manager Shildt the decision of whether to pull him for a pinch-hitter. At 65 pitches, well below his season high of 100, it seemed safe to leave Lester in for the sixth. He rewarded his manager’s confidence with a 12-pitch one-two-three inning, leaving him in line for his milestone win.

Both pitchers were replaced in the top of the seventh. Matt Carpenter pinch-hit for Lester, facing Hunter Strickland. Carpenter doubled into left, his head-first slide just beating the throw from Christian Yelich. Carpenter took third on Edman’s groundout and scored on Paul Goldschmidt’s sacrifice fly, giving the Cardinals an insurance run.

Kodi Whitley pitched a one-two-three bottom of the seventh.

The Cardinals tacked on one last run in the eighth off reliever Brent Suter. Arenado walked, took second on Carlson’s bunt, and scored on Molina’s single, bringing the score to the final 5-2, Cardinals. For Molina, that was career single number 1,530, moving him past Ozzie Smith for sole possession of third place on the Cardinals all-time record list.9 Sosa grounded into a double play to end the inning.

After Whitley walked Manny Pin͂a in the bottom of the eighth, Shildt called on T.J. McFarland, often brought in with runners on base.10 He induced a groundball double play, aided by some great footwork by Arenado – who was headed for his ninth straight Gold Glove Award at third – and a fly out to complete his assignment.

No runner got past first base in the ninth inning. Once Eduardo Escobar grounded out to first for the final out, Lester joined his teammates on the field, giving and accepting congratulations.

“It’s a nice round number and it looks better than 199,” said Lester of his milestone total. “It’s obviously awesome, but I’m kind of lacking words.”

Shildt didn’t lack words for praising Lester. “What a tremendous addition,” the manager said. “He’s done a great job. This guy’s got such heart. He’s like John Wayne. He’s got that true grit. Big, strong silent type. That’s a heck of a milestone.”11

The Cardinals made it to the postseason – this ninth consecutive win was the midpoint of a 17-game winning streak. Their postseason run lasted only one game, as they lost the wild-card game to the Los Angeles Dodgers. The Brewers won their division but lost the Division Series 3-1 to the Atlanta Braves, who went on to win the World Series.

Lester made two more starts after this game but both were no-decisions, and did not pitch in the Cardinals’ one postseason game. Although his performance with St. Louis (4-1, 4.36 ERA in 66 innings pitched) was better than with the Nationals, he decided to call it a career after the 2021 season, making the announcement in January 2022. He said his body was no longer up to the rigors of a major-league season, adding, “I don’t want someone else telling me I can’t do this anymore. I want to be able to hand my jersey over and say, ‘Thank you, it’s been fun.’ That’s probably the biggest deciding factor.”14

In 15 seasons with the Boston Red Sox and Chicago Cubs,15 Lester had played on three World Series winners, made five All-Star teams, pitched a no-hitter, and finished in the top 10 in the Cy Young Award voting four times. He was also awarded the 2007 Tony Conigliaro Award for his comeback after being diagnosed with lymphoma in 2006.16 Although he wrapped up his career pitching for two teams other than the two he was most closely associated with, his final year allowed him to achieve that 200-win milestone.

In addition to the sources cited in the Notes, the author consulted Baseball-Reference.com and Retrosheeet.org for pertinent information, including the box score and play-by-play, and watched the St. Louis broadcast of the game on MLB.com.

3 Getting Lester and Happ allowed the Cardinals to keep pitching prospect Johan Oviedo in the minors.

6 Those two RBIs moved him into second place in the National League with 101 on the season. He finished the season with 105, good enough for fifth place.

8 Bernie Brewer was the Brewers’ mascot, who slid down a curved chute after a home run. In 2004 some Cardinals players celebrating a pennant snuck up to his perch and slid down the slide. Molina might remember that incident – 2004 was his rookie year with the Cardinals. Adam McCalvy, “Bernie Brewer Origin … and Espionage?” mlb.com, February 12, 2021. https://www.mlb.com/news/milt-mason-the-original-bernie-brewer. Retrieved July 15, 2022.

12 Neither Verlander nor Greinke earned any additional wins in 2021, so those numbers were unchanged at the end of the 2021 season. However, both of them continued pitching in 2022.