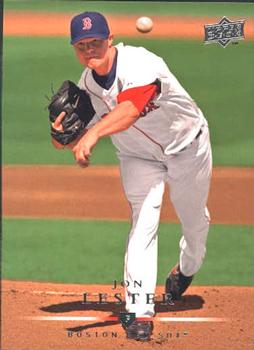 He had been diagnosed with anaplastic large cell lymphoma in 2006, during his first major-league season with the Boston Red Sox. Near the end of July 2007, he returned to baseball after an absence of 11 months for cancer treatment. He was 4-0 for the Red Sox in what remained of the 2007 regular season, and on October 28 won the clinching game of the World Series against the Colorado Rockies.

When 2008 started, the 24-year-old Lester was an integral member of Boston’s rotation. He made history again by pitching a no-hitter against the Kansas City Royals on May 19 at Fenway Park. It had been more than 50 years since a Red Sox left-hander had thrown a no-hitter.1

Red Sox pitching coach John Farrell said one never would have guessed before the game that Lester was going to have a good game, much less a no-hitter. The Boston Globe’s Gordon Edes reported that Lester himself said you’d have sworn he wouldn’t get out of the first inning.2 Farrell said that when warming up, “he was probably the most erratic he was of any bullpen throughout this season.”3

This wasn’t the strongest of lineups Lester faced. The Royals finished 2008 toward the bottom of the American League in several offensive categories. The Kansas City Star’s Sam Mellinger wrote, “The Royals are not a good offensive team. We all know this. And it doesn’t take a thing away from Jon Lester’s no-hitter last night. It’s just a fact.”4 It was, though, only the second time the Royals had ever been no-hit. The first was on May 15, 1973 – Nolan Ryan’s first career no-hitter.

Lester was 2-2 in the still-young 2008 season. The Red Sox were in first place in the AL East (27-19) but by only one game over the Tampa Bay Rays. The Royals were 21-22, and in fourth place but only a game and a half behind the AL Central-leading Chicago White Sox. Terry Francona was Boston’s manager. Trey Hillman was Kansas City’s skipper.

The Monday night game was sold out, as had been every game at Fenway Park since May 15, 2003.5

Center fielder David DeJesus led off for the Royals. He took a called strike, then hit a ball to left field into a wind blowing in that the Globe said was 23 mph. Manny Ramirez hauled it in for the out. Lester retired the side in order in the first. So did righty Luke Hochevar (3-2) in the bottom of the inning, making just the 10th start of his major-league career.

Lester walked first baseman Billy Butler in the second. With two outs, he would have picked off Miguel Olivo (on base after a grounder to third that forced Butler), but his throw went astray and Olivo took second. Error: Lester. He then fielded a squibber in front to the plate and threw out Mark Teahen for the third out. A one-out walk followed by a double play was Boston’s fate in the bottom of the second.

The three Royals batters in the third never got the ball out of the infield. The Red Sox, on the other hand, took control of the game with five runs in their half. Back-to-back singles kicked off the inning, but Julio Lugo hit into a 6-4-3 double play that might have taken the steam out of any rally. One run scored, but the bases were empty.

As it happened, the Red Sox were just getting started. Jacoby Ellsbury tripled to the bullpen triangle in center. Dustin Pedroia – 2007 AL Rookie of the Year, bound for AL MVP honors in 2008 – walked on four pitches, then stole second while David Ortiz was batting.

Third baseman Mike Lowell popped up to second base, but Mark Grudzielanek simply dropped the ball, and two more runs scored for a 4-0 lead. Kevin Youkilis hit a rule-book double to right-center and Ramirez scored. Hochevar finally closed out the inning when J.D. Drew (who’d singled to kick things off) flied out to deep right field.

From Olivo in the second inning through Teahen, the last batter in the top of the eighth, Lester retired 20 batters in succession, striking out seven of them. Only four of the 20 outs were recorded by Red Sox outfielders. Ellsbury made the most memorable putout with two outs in the bottom of the fourth, when Royals DH José Guillen “sent a sinking two-out liner into center” on which “Ellsbury made a terrific diving catch.”6 It was the only time the Royals came close to getting a base hit.

The Red Sox got two more runs in the sixth when catcher Jason Varitek hit a one-out two-run homer to right field, driving in Drew, who had been hit by a pitch. After six, Joel Peralta took over pitching from Hochevar. Yasuhiko Yabuta pitched the bottom of the eighth.

By the sixth inning, Lester had known he had a no-hitter going. Varitek said he wasn’t aware until the following inning. “I looked up in the seventh,” he said, “and saw Lester] was around 100 pitches and [thinking] he did his job. I glanced at the bullpen and saw nobody was warming up and thought that was weird.”7

With a comfortable 7-0 lead heading into the ninth inning, everyone knew that Lester had to secure three more outs before the Royals got a hit. Lester, his catcher, all his teammates, all the Royals, the four umpires working the game, and the 37,746 in attendance – not to mention the countless thousands upon thousands following the game on radio, television, and other media.

“I had a lot of excitement going into the ninth inning,” Lester said. “The fans were great, on their feet and screaming. It’s one of the loudest times I’ve heard at Fenway.”8

Lester’s pitching coach Farrell had taken a no-hitter into the ninth inning himself at Cleveland Stadium on May 4, 1989 – against the Royals – but lost it after Kevin Seitzer stroked a one-out single to right field in the ninth inning.

DeJesus, who had hit the ball hard back in the first inning, grounded out weakly to Youkilis at first base, unassisted. No one really worried about the baserunner advancing to third base.

Coming to the plate was Alberto Callaspo. The count went to 1-and-2 and then Lester struck him out swinging on a 96-mph fastball.

Jon Lester had his no-hitter.

The final score was 7-0. The Red Sox had only five base hits but made the most of six walks and an error.

Lester struck out nine in the game and walked two. His throwing error was the only one committed by Boston. He threw 130 pitches in the crisp time of 2:30.

For Jason Varitek, it was the record-tying fourth no-hitter that he had caught.9

Terry Francona said after the game, “You’re trying to keep your emotions in check. I went to say something to [pitching] coach John Farrell, and he was being a big baby next to me. It made me feel a little better.”10

Lester said of his manager, “He just said he was proud of me. I’ve been through a lot the last couple of years. He’s been like a second dad to me. It was just a special moment right there.”11

Which was a bigger game for him – the Game Four win in the 2007 World Series or the no-hitter? “I can’t tell you which one means more to me than the other. The World Series is, obviously, the World Series. … They’re both up there. They both mean a heck of a lot to me, and something I’ll cherish for a long time.”12

There was an earlier game of note. On July 18, 2006, in his eighth major-league start and just a few weeks before his cancer diagnosis, Lester had one-hit the Royals through eight innings. Jonathan Papelbon, a fellow Red Sox rookie, pitched a hitless bottom of the ninth. It was the first time in 27 years that two rookies had combined on a one-hitter.13 This time, Papelbon was content to watch from the bullpen. Lester had needed no helping hand.

Lester won 200 major-league regular-season games and another nine in the postseason. He won that final game for Boston in 2007 and two more against the St. Louis Cardinals in the 2013 World Series. Lester was later a key part of the 2016 Chicago Cubs winning their first world championship in 108 years, going 19-5 during the regular season and winning three more games in the postseason, including his fourth career World Series victory. His no-hitter against Kansas City in 2008, capping an eventful 10-month period of his career, stands alongside those October glories in his record of accomplishment.

The author of this article had long been aware of the axiom “no cheering in the press box.” Rather than go out to sit with the crowd and take in the full excitement surrounding the unfolding no-hitter, he stayed put, wondering if there would be any buzz or acknowledgment. None. Everyone was huddled over their keyboards. If anything, it was quieter than usual.

1 The last left-hander to throw a no-hitter for the Red Sox was Mel Parnell, on July 14, 1956. Lester’s no-hitter was the 18th in Red Sox franchise history, an average of one every six years. The last no-hitter at Fenway, though, had been just a few months earlier, when Clay Buchholz threw one in his second major-league start, on September 1, 2007.

9 Carlos Ruiz of the Philadelphia Phillies also caught four. Varitek had previously caught the no-hitters of Hideo Nomo, Derek Lowe, and Clay Buchholz. And the October 1, 2006, game pitched by Devern Hansack, which is in the books as a win, a complete game, and a shutout – and in which the Orioles had no hits – but which is not defined as a no-hitter because it was ended after five innings due to rain.

10 Bob Dutton, “Lester Tosses First No-Hitter for a Lefty in Fenway in 52 Years.”