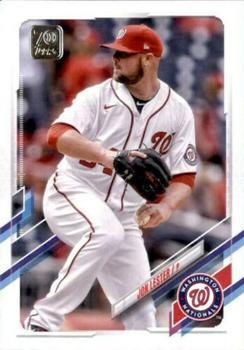 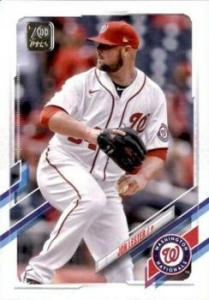 Left-hander Jon Lester had enjoyed one of the best careers of any major-league pitcher in the twenty-first century when he signed a $5 million, one-year contract with the Washington Nationals not long before spring training 2021.1 In 15 seasons with the Boston Red Sox and Chicago Cubs, Lester had won 193 games, played on three World Series winners, and made five All-Star teams.

The Cubs had chosen to buy out his 2021 option year after six seasons in Chicago, leaving the 37-year-old Lester looking for a team. His results with the Nationals were unimpressive: a 2-4 record and a 5.54 ERA as he prepared to start against the Miami Marlins on July 19.

The Nationals (43-49, fourth in the NL East, 6½ games behind the division-leading Mets) were having a difficult July. Their season had appeared to be looking up after a 19-9 June brought their record above .500 and put them in second place, only 2½ games back in the division. But 11 losses in their first 13 July games had diminished postseason hopes, even after a walkoff win over the San Diego Padres the previous afternoon.

The Marlins (40-54, last in the NL East) had not had a winning record at any point in the season. After a surprising postseason appearance in the pandemic-shortened 2020 season, they had shown few signs of building on that success.2

Nationals’ 2007 first-round pick Ross Detwiler (1-0, 4.08 ERA) was the opener for the Marlins, the eighth team of his major-league career. Traded by the Nationals to the Texas Rangers after the 2013 season, Detwiler had made his last start in Nationals Park on July 3, 2013.3 If this was a homecoming of sorts, the timing was propitious—it was his 100th career start.

Detwiler’s former team greeted him with four hits, each flying farther than the last: Alcides Escobar singled, Trea Turner tripled, Juan Soto homered into the front row of seats, and Josh Bell’s homer landed three rows from the concourse in left. Detwiler recovered to get three outs in the air, but the Nationals were leading, 4-0.

Lester collected two more strikeouts and a groundout for a clean top of the second.

Detwiler returned to the mound for the bottom of the second—and gave up another four runs. The onslaught started with Tres Barrera, who hit Detwiler’s first pitch for his first career home run.4 When Barrera returned to the dugout, he walked the length of it grinning broadly, as his teammates appeared preoccupied with their scouting reports. A few seconds later, Barrera was mobbed by his teammates, congratulated, and given the “key to the batter’s box,” the Nationals’ award for hitting a home run.5

Lester singled and Detwiler hit Escobar’s foot with a pitch. After being checked by the trainer, Escobar stayed in the game. He didn’t have to run hard—Turner’s home run over the visitors’ bullpen, Washington’s fourth long ball in two innings, brought them all home and chased Detwiler with the score now 8-0, Nationals.

Detwiler was replaced by David Hess, in the role of “bulk reliever” per baseball’s terminology in 2021.6 The change of pitcher didn’t slow the Nationals’ bats. Soto doubled into the left-field corner. Bell struck out, but Josh Harrison doubled into the same spot, scoring Soto. After Andrew Stevenson popped out, Gerardo Parra hit a roller into center. Harrison scored, but Parra was caught in a rundown trying to take second. The inning was finally over, but the Nationals led 10-0.

The Miami batters gave the fielders a workout in the third but didn’t score. Soto made a running catch of Monte Harrison’s fly. Hess struck out.7 Rojas missed a homer into the visitors’ bullpen by about three feet—Parra tracked down the ball on the warning track and held him to a double. Soto made another running catch of Berti’s fly to end the inning.

All Hess allowed in the bottom of the third was a walk to Escobar. He struck out Barrera, Lester, and Turner.

Lester worked a one-two-three top of the fourth.

Soto opened the bottom of the fourth with his league-leading 61st walk but was erased when Bell grounded into a double play. Josh Harrison flied out to end the inning.

In the fifth, Joe Panik singled for the Marlins’ third hit, only to be erased when Lewis Brinson grounded into a double play. Monte Harrison doubled into right, just over Soto’s head, but Hess grounded out.

Parra, a fan favorite with the 2019 World Series champion Nationals, had returned to Washington a month earlier after spending the 2020 season playing for the Yomiuri Giants in Japan. He hit a one-out single in the bottom of the fifth, much to the delight of the crowd.8 One out later, Lester stepped to the plate and hit the fourth home run of his 16-year career. It soared 419 feet,9 bouncing off the stadium garage door deep behind the center-field fence, to the right of the batter’s eye. Escobar flied out with the score now 12-0, Nationals, but no one cared—the fans were cheering and the dugout was going wild.

Lester’s exertion on the basepaths didn’t seem to affect his pitching—he induced two groundouts and a strikeout for a quick top of the sixth.

Andrew Bellatti took over the pitching for the Marlins in the bottom of the sixth, making his first appearance on a major-league mound since October 2, 2015.10 Soto hit a one-out comebacker, but Bellatti threw the ball into the dirt past first, and Soto took second. Bellatti got the next two outs without issue.

Lester continued into the seventh inning for the first time since July 2019. Duvall singled, but Jorge Alfaro and Panik were each out on one pitch. After Brinson singled, Monte Harrison popped out on Lester’s 81st and final pitch of the game, ending the frame. This was Lester’s best pitching performance of the year, earning him a 72 Bill James Game Score—plus two RBIs and a home run.11

Bellatti was back for a second inning in the bottom of the seventh. Parra hit a ground-rule double—it bounced on the field and right into Nationals reliever Kyle Finnegan’s hand in the bullpen.12 Parra advanced to third on Barrera’s single and scored on pinch-hitter Yadiel Hernández’s single. Escobar’s bloop hit loaded the bases. Jordy Mercer, pinch-hitting for Turner, bounced the ball off the bottom of the left-field fence for a two-run single.

With the score now 15-0, Miami manager Don Mattingly decided to cut his losses and let a position player take over the pitching. Catcher Sandy León, another former National, took the mound for the second time in 2021.13 Soto hit the second pitch into the Red Porch, bringing the score to 18-0 on Washington’s sixth homer of the game. It was Soto’s fifth home run in the four games since the All-Star break. He had participated in the Home Run Derby, thinking it might help his swing.14 Apparently it did.15 León got Bell and Josh Harrison out on three pitches.

The Marlins finally got on the board in the top of the eighth when Rojas, who had three of the Marlins’ nine hits, homered off Wander Suero.

León continued pitching in the bottom of the eighth, working noticeably faster than a typical major-league pitcher. He induced three groundouts, throwing six of eight pitches for strikes.

Reliever Jefry Rodriguez was tasked with holding the Nationals’ 18-1 lead. He allowed singles to Magneuris Sierra and Alfaro but followed that with a double play that erased Alfaro. Brinson’s strikeout ended the game and Lester’s 196th career win.

The Nationals followed up the blowout by extending their winning streak to three in a row with a 6-3 win over Miami on July 20, but a five-game losing streak was next. One of those defeats turned out to be Lester’s final start for the Nationals, a 5-3 loss to the Orioles on July 24.

The question of whether the Nationals would be buyers or sellers at the July 30 trade deadline, still open during Washington’s mid-July homestand, was answered as the July struggles continued. General manager Mike Rizzo made six trades in two days over July 29-30, dealing 2019 championship heroes Turner, Max Scherzer, and Daniel Hudson, along with several short-term Nationals. One of the trades sent Lester to the St. Louis Cardinals for outfielder Lane Thomas.16

Although Lester’s record with St. Louis was better than with the Nationals (4-1, 4.36 ERA in 66 innings pitched), he decided to call it a career after the 2021 season.17 He retired with exactly 200 career wins (and 117 losses). His time with the Nationals was brief, but this game was definitely his best day in Nationals Park.

I attended this game with a group of friends. We sat in Section 313, where the N-A-T-S, Nats-Nats-Nats, WOO! chant originated. The cheer also involves waving our caps in rhythm with the cheer. Our arms were tired by the end of the game!

This game was fact-checked by David Krell and copy-edited by Len Levin.

In addition to the sources listed below and personal notes, the author viewed the recorded game on MLB.tv.

4 He got the ball back. It landed in the Red Porch seats in center field, and a Nationals staff person negotiated a trade with the fan who caught it. MLB video https://www.mlb.com/video/tres-barrera-homers-1-on-a-fly-ball-to-center-field. Retrieved April 10, 2022.

5 The “key to the batter’s box” was an idea by Nationals manager Davey Martinez to jump-start the offense in June. A random key on a shoestring was given to the first player of each game to make a great play on offense. That player would give the key to the next player to homer. That key didn’t stay in one place long in this game. Patrick Reddington, “Washington Nationals’ Davey Martinez on the Key to the Batter’s Box…,” federalbaseball.com, July 1, 2021. https://www.federalbaseball.com/22558112/washington-nationals-davey-martinez-on-key-to-the-batters-box. Retrieved January 16, 2022.

6 Baseball commentators were still trying to decide what to call the pitcher who follows the opener. “Bulk reliever” was the term used by the TV broadcasters.

7 This was not surprising as Hess had spent most of his four-year-career in the AL. He was 0-for-5 for his career and at the end of the 2021 season still did not have a hit in the majors or minors.

8 Parra still used the same Baby Shark walkup music as he did in 2019, and the fans still sang along. For more about Parra and the Baby Shark music, see Laura Peebles, “Gerardo Parra Brings the Baby Shark to Rally Washington Nationals,” https://sabr.org/gamesproj/game/june-19-2019-gerardo-parra-brings-the-baby-shark-to-rally-washington-nationals/.

12 The bullpens in Nationals Park have a raised bench just behind the fence where the relievers can easily watch the game. It’s not unusual for one of them to catch a home run or ground-rule double.

13 He made six appearances as a pitcher in 2021 for the Marlins, in games they were losing badly. He finished 2021 with a 7.50 ERA. That was better than Hess and five other Marlins pitchers.