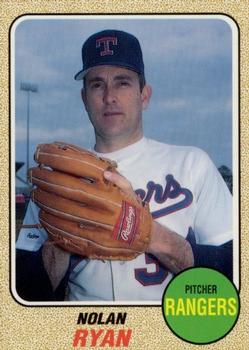 On September 22, 1993, the Texas Rangers (81-70) played the third game of a three-game series against the Mariners (77-74) in Seattle. The teams had split the first two games of the series, and the Rangers trailed the White Sox by 4½ games with 11 games to play entering the contest. The Rangers badly needed a win to keep their faint playoff hopes alive. The Mariners were effectively out of the running; they trailed the White Sox by 8½ games.

Nolan Ryan started for the Rangers. He entered the game with a 5-4 record and an ERA of 4.21. Ryan was 46 years old but five days earlier against the California Angels had pitched like someone still capable of an eighth career no-hitter. He held the Angels scoreless for five innings, allowing just three singles in separate frames. In the sixth, Luis Polonia got aboard on a fielder’s choice to second base. Polonia stole second and advanced to third on an errant throw by the Rangers’ All-Star catcher, Ivan “Pudge” Rodriguez. He scored on a sacrifice fly. This unearned run was the only run Ryan allowed in seven innings pitched against the Angels.

Lefty Dave Fleming, with a 10-4 record and a 4.47 ERA, was Ryan’s mound opponent in Seattle. Fleming had given up five earned runs in 2⅔ innings in his last start, so the Rangers had reason to hope that Ryan, their apparently ageless pitcher, could provide them the victory they desperately needed. In the top of the first inning, Fleming retired the Rangers in order on nine pitches.

Ryan immediately ran into trouble in the bottom half of the first. Omar Vizquel led off with a single. Rich Amaral and Ken Griffey Jr. walked, loading the bases with no outs. Jay Buhner worked another walk, forcing in Vizquel and lifting the Mariners to a 1-0 lead.

The bases were still loaded when Dann Howitt stepped in. Howitt was a 29-year-old utilityman playing left field in this game for Seattle, his second stop on a six-year major-league career. Ryan got ahead of the lefty-swinging Howitt with a 1-and-2 count. But Howitt crushed the next pitch over the left-field fence for a grand slam. The Mariners had a 5-0 lead before an out had been recorded.

After the slam, Dave Magadan came to the plate. On his fourth pitch to Magadan, Ryan felt a pop and a burning sensation in his arm. He threw one more pitch — which made the count 3-and-1 — but was unable to continue. Texas manager Kevin Kennedy called Steve Dreyer from the bullpen. Dreyer walked Magadan but then retired the Mariners without additional scoring.

Both teams were scoreless over the next two innings, but Fleming ran into trouble in the top of the fourth when the Rangers put men on first and second with one out. Julio Franco drove in a run with a line drive down the left-field line. It looked as if the Rangers would be in a position for a big inning, but Franco was thrown out at second by left fielder Howitt when he tried to stretch the single into a double. The Rangers settled for a single run.

The Rangers attempted to rally again in the fifth. Consecutive doubles by Doug Strange and John Russell produced a run. Manuel Lee followed with a single; the Rangers, down by three runs, had men on the corners and only one out. But Fleming dug in and got out of the jam with a strikeout of Donald Harris and a fly out by Chris James.1

In the bottom of the fifth, Magadan doubled off Dreyer with one out. Kennedy replaced Dreyer with Matt Whiteside, who walked the first batter he faced. Dave Valle’s RBI single and Brian Turang’s run-scoring groundout gave Seattle two more runs, bumping the lead back up to 7-2.

Neither team scored in the next two innings. Texas managed to push single runs across in both the eighth and ninth innings to make the final score 7-4, Seattle. Down the coast in Anaheim, the White Sox won, increasing their lead over the Rangers to 5½ games with 10 games remaining in the season. Over that stretch the Rangers won five and lost five. They were still in second place but finished the season eight games behind the AL West champion White Sox.

The final pitch Nolan Ryan threw to Dave Magadan in the first inning turned out to be the last pitch of his 27-year career. After the game Ryan said, “On the pitch to Magadan I felt it pop, and I had a real bad burning sensation. I tried one pitch after that and wasn’t able to throw. The first thing I thought when I heard it pop was I knew that I was done.” This unexpectedly abrupt ending to his career disappointed Ryan badly. He added, “Yeah, it was a sad moment. I knew my career was going to end, but that certainly wasn’t the way I wanted it to, ending on that disappointing note.”2

The man who would eventually be second to Ryan on the all-time strikeout list, Randy Johnson, was in the Seattle dugout to see Ryan’s last pitch. Johnson, whose breakthrough 1993 season included 19 wins, a major-league-leading 308 strikeouts, and a second-place finish in the AL Cy Young Award voting, credits Ryan with turning his career around.

Ryan spoke to Johnson before a game in August 1992; Johnson said Ryan’s comments helped him become the fearsome pitcher he was capable of being.3 Asked about Ryan’s career, Johnson said, “Nolan Ryan is the Babe Ruth of pitching. I don’t think anyone will break his records. The strikeout and no-hitter records are etched in stone. He’s not necessarily a spokesman for the game but a lot of people look up to him as a legend. And that he is.”4 And like Ryan, Johnson was 46 years old when he threw his own last pitch, on October 4, 2009, as a member of the San Francisco Giants.

I wrote an account of this game, my first Games Project effort, because I was privileged to have been among the 40,184 fans who got to see Ryan’s last pitch. Given the length of Ryan’s career, the fact that the end came unexpectedly, and the relatively few games I was able to attend in 1993, this was an amazing stroke of good fortune.

In addition to the sources cited in the Notes, I used the Baseball-Reference.com for team, season, and player pages and logs and the box scores and play-by-plays for this game.

1 These two Ranger half-innings demonstrate that the margin between victory and defeat, even in what ultimately becomes a noncompetitive game, can be very thin. It is entirely possible that the Rangers could have scored multiple runs on both of those opportunities. Had they done so, the result of the game could well have been different. It’s important to remember when reading a game account, in the Games Project or elsewhere, that what actually happened was not preordained. Events could have gone differently with very small changes.

5 Ryan records: No-hitters: Ryan threw seven no-hitters between 1973 and 1991. He was 44 years old when he threw his final no-hitter, against the Toronto Blue Jays in Arlington, Texas. No other pitcher is close to this record. Sandy Koufax is next on the multiple-no-hitter list with four. Strikeouts: Ryan struck out a total of 5,714 batters in his career. No other pitcher has even exceeded 5,000 strikeouts. The next pitcher on the career strikeout list is Randy Johnson with 4,875. Ryan also holds the record for strikeouts in a single season. In 1973 he broke Koufax’s record of 382 strikeouts when he fanned 383 batters. Only 18 other pitchers have struck out at least 300 hitters in a season and only three others — Johnson, Curt Schilling, and Koufax — have managed to do it more than twice. As Johnson noted in his quote, these strikeout records are not likely to be broken. Longevity: It’s also important to appreciate just how long a 27-year career is. No one in the modern history of baseball has played more seasons than Ryan, although Cap Anson (1871-1897) did match his longevity about a century earlier. Ryan’s total would have been 28 seasons had he not missed the 1967 season while he still had rookie status with the New York Mets. In his 2011 book High Heat, Tim Wendel writes that Ryan didn’t play in the major leagues that season due to a combination of an arm injury and service time with the Army Reserve.