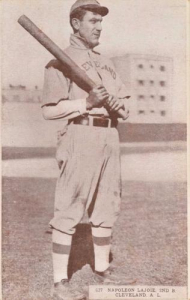 Hall of Famer Nap Lajoie is often referred to as the American’s League’s first superstar, excelling both offensively and defensively. Cy Young, who knew Lajoie first as an opponent and later as a teammate, said of the career .338 hitter, “Lajoie was one of the most rugged hitters I ever faced. He’d take your leg off with a line drive, turn the third baseman around like a swinging door, and powder the hand of the left fielder.”1

Connie Mack made similar remarks about Lajoie’s fielding skills at second base. “He plays so naturally and so easily it looks like lack of effort. Larry’s reach is so long and he’s fast as lightning,” opined Mack, Lajoie’s manager during two stints with the Philadelphia Athletics.2

Lajoie began his career in 1896 in the National League, debuting with the Philadelphia Phillies at age 21. He was a star there for the next four years, but during a contract dispute jumped to Mack’s Athletics of the upstart American League for the 1901 season.3

Lajoie had another stellar season in 1901, winning the first Triple Crown in American League history, but the Phillies won an injunction from the Pennsylvania Supreme Court forbidding him to play for any team except the Phillies. Since the injunction was enforceable only in Pennsylvania, the Athletics transferred him to the Cleveland Bronchos in 1902.4

Lajoie was very popular with the fans and the press in Cleveland, which led to the team being known as the Cleveland Naps from 1903 through 1914. (He’s the only major-league player to have his team named after him while still an active player.5)

A little over six years later, on September 26, 1914, three weeks after his 40th birthday, Lajoie singled in the second game of a Saturday doubleheader against the Washington Senators in Cleveland.

Sources vary on where this hit put Lajoie’s career total. Contemporary coverage considered it his 2,998th career hit; some twenty-first-century references regard it as hit number 2,999.

Either way, it was one of only four hits for the Naps in a 6-0 loss, their 99th defeat of 1914. Cleveland had never won an AL pennant, but the franchise had at least avoided last place in its first 13 seasons. That streak was ending in 1914. The Naps had won only 24 of 86 games from June 24 through September 24 (a .279 winning percentage) to drop into the cellar, 20 games behind the next closest club and 48½ games behind the first-place Boston Red Sox, with a week to go in the season.

This was a historically bad season, opening with eight straight losses and finishing April with a .250 winning percentage. Naps pitchers allowed 708 runs, 90 more than any other AL team. Among Cleveland’s parade of Blues, Bronchos, Naps, Indians, and Guardians since the AL’s inaugural 1901 season, 1914’s winning percentage of .333 stood, as of 2022, lowest in franchise history.

Lajoie’s own numbers in 1914 mirrored his club’s decline; he was batting .258 and slugging .305, far below his career totals, as well as his production in any previous season.

The New York Yankees arrived in Cleveland on September 27 to open a three-game series, beginning with a Sunday doubleheader. New York – in its second season after moving its home games from Hilltop Park to the Polo Grounds full time, dropping its original “Highlanders” nickname, and rebranding itself as the Yankees – had yet to win an AL pennant and was tied for sixth in the American League with a 66-78 record.

Given the poor performance of the two teams, many of the 3,000 Cleveland fans who attended the doubleheader may have been more excited about the prospect of seeing Lajoie reach the milestone than the possibility of Naps victories.7

In the first game of the day, the Yankees started 26-year-old right-hander Marty McHale, who had struggled through the season with a 6-14 record. The Naps countered with rookie righty Guy Morton.

Morton was an example of the cliché, “A pitcher has to be pretty good to lose 20 games.” He threw hard – his manager thought he was almost as fast as Walter Johnson – but Morton, who had made his major-league debut in June 1914, the month of his 21st birthday, was 0-13 before his start against the Yankees.8 The poor record was in part a result of weak fielding and run support during many of Morton’s starts.9

Each pitcher allowed a run in the first inning and shut down his opponent in the second. The Yankees added another run in the top of the third to take a 2-1 lead.

The hurlers then put up zeros until the bottom of the fifth, when a double by Lajoie contributed to a three-run outburst that put the Naps ahead, 4-2. Lajoie doubled for the second consecutive inning in the sixth, and the Naps tacked on one more run during that frame to increase their lead to three runs.10

Roger Peckinpaugh, a Nap before joining the Yankees in a May 1913 trade, was serving as New York’s interim manager for the season’s final three weeks; at age 23 he was the youngest man to ever manage a major-league team. The opportunity to manage had opened up when Frank Chance quit the position out of frustration with ownership interference.11 Peckinpaugh replaced McHale with Boardwalk Brown in the seventh.12 Brown held the Naps hitless the next two innings.

The Yankees cut the gap to two with a seventh-inning run but made it no closer. Morton pitched a complete game, earning the first win of his career, as the Naps took the game, 5-3.13

Newspaper coverage reported that his second double against McHale, in the sixth inning, had put Lajoie in the 3,000 Hit Club. As the hometown Cleveland Plain Dealer described it, “His 2,999th [in the fifth] was also a double, but he had no chance to go beyond the 3,000th as he failed to come to bat again in the first game and was allowed to go home when that contest was ended.”14 The Cleveland Press noted that Lajoie was presented with the ball after he reached second base in the sixth.15

The Brooklyn Times Union corroborated the Cleveland papers: “Lajoie got a great reception when he drove out the second double.”16

But two prominent twenty-first-century references, Baseball-Reference.com and Retrosheet.org, have a different count. Both credit Lajoie with 2,999 hits as of September 26, putting him one hit ahead of what everyone believed in 1914.

The difference is that these sources rely on the 1969 Macmillan Baseball Encyclopedia for statistics from prior to 1903, rather than data from the Spalding Guides, which were considered authoritative during Lajoie’s career as an active player, through his induction into the National Baseball Hall of Fame in 1937, and for several years past his death in 1959.17 By this count, the fifth-inning double off McHale was the actually Lajoie’s 3,000th hit.

Regardless of which was his 3,000th hit, the veteran was pleased that he had joined Cap Anson and Honus Wagner (who had reached the milestone three months earlier) in the 3,000 Hit Club. Lajoie opined, “I believe I come pretty close to being the happiest man in Cuyahoga County. It’s mighty fine to make 3,000 hits when you figure Pop Anson and Honus Wagner are the only other batters to turn the trick. I feel like my pet bats have a few more hits in their systems and I feel like boosting my mark a few hundred before I quit.”18

The milestone hit came in Lajoie’s 1,613th game in 13 seasons with Cleveland’s AL franchise. He appeared in one more game with his namesake team, drawing a walk as a pinch-hitter on September 30. The Naps finished the season at 51-102-4.

Cleveland sold Lajoie to the Philadelphia Athletics in January 1915. Reunited with Mack in Philadelphia, he did have a couple hundred more hits in his bats, as he played his final two years for the Athletics and finished his career with 3,243 hits. As of 2022, that was the 15th highest career total for hits.

Many thanks for John Fredland for his comments and suggestions. Thanks also to Andrew Harner for providing 1914 newspaper accounts. The article was fact-checked by Kevin Larkin and copy-edited by Len Levin.

In addition to the sources cited in the Notes, I used Baseball-Reference.com for team, season, and player pages and logs and the box scores and play-by-plays.

6 Two twentieth-century players to reach the 1,000-hit plateau in fewer than 700 games are Chuck Klein (683 games) and Ichiro Suzuki (696 games). It’s not likely that Lajoie’s 653 games is the all-time record for fastest to 1,000 hits, but poor record-keeping during the nineteenth century makes it difficult to know who actually holds the record. For example, Baseball-Reference.com shows that Willie Keeler accumulated 931 hits in 556 games between 1892 and 1897. Keeler certainly reached 1,000 career hits in 1898 since he led the NL in hits with 216 that year. But it is not known exactly how many games into 1898 it took him to accumulate the 69 hits he needed to reach 1,000.

9 Morton’s 3.31 ERA was more than half a run higher than league average, but his 0-13 record was undeserved. Cleveland had scored two or fewer runs in 8 of his 12 starts. Morton had also been victimized for 16 unearned runs in 117 innings pitched (1.23 unearned runs per nine innings).

11 Eugene Murdock, “The Youngest ‘Boy Manager,’” SABR Research Journals Archive, http://research.sabr.org/journals/youngest-boy-manager (last accessed August 1, 2022). Peckinpaugh’s tenure as manager of the Yankees lasted only for the final 20 games of the 1914 season; they hired Bill Donovan to manage in 1915. As a player. Peckinpaugh helped the Yankees win their first pennant in 1921 and won the World Series with Washington in 1924; he also managed the Indians from 1928 through 1933 and again in 1941, finishing his managerial career with a .505 winning percentage in 995 games.