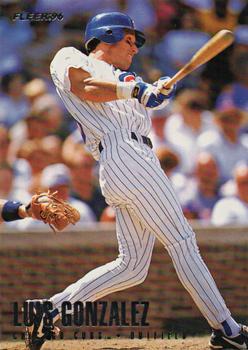 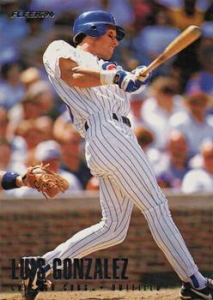 It was a pleasant 76-degree day on the north side of Chicago.1 The outfield vines had taken on an autumnal hue and waved gently in the soft southerly breeze on the first Friday of fall. There might have been a trace of magic still lingering in the air for the 2:20 P.M. start after Thursday’s dramatics.

The Chicago Cubs were looking for a little more luck. They had won seven games in a row, two of them in extra-inning walk-off fashion, the most recent of which was a day earlier. That contest was an extraordinary game with multiple lead changes. The Cubs came from behind six times, a comeback to remember for the Cubs, but a game the Astros were looking to forget.

The score was 5-5 after five innings, 6-6 after six, 7-7 after seven; and the paired scores continued in the eighth and 10th innings. The Astros scored their 11th run in the top of the 11th inning. The Cubs scored twice in their half of the 11th, with Mark Parent driving in Scott Bullett with the winning run, to win the game, 12-11.

It was the final weekend of the 144-game, strike-shortened 1995 baseball season, and the first season that a wild-card team would join the playoffs along with the three champions of the newly reorganized divisions. Both the Cubs and Astros clung to slim hopes of qualifying; they were chasing whichever of the Colorado Rockies or Los Angeles Dodgers finished second in the National League West. The Cubs’ 72-69 record had them two games behind the Astros and three games behind the Rockies, who themselves trailed the Dodgers by a game – with three games to play.

Mike Hampton was on the hill for the Astros to face Jaime Navarro. A pitchers’ duel ensued. The game was scoreless through five innings. Each team failed to capitalize on early scoring opportunities. The Astros left two runners on base in the first when Navarro registered two swinging strikeouts after giving up back-to-back line-drive singles to Craig Biggio and Jeff Bagwell. The Cubs’ threat came in the second when Hampton walked every other Cubs batter to jam the bags with two outs, but struck out Navarro to end the frame.

In the sixth inning, Biggio led off with a single. One out later, Derrick May singled, moving Biggio to third. Dave Magadan hit a sharp ground ball that was nabbed by shortstop Shawon Dunston, but his only play was to first base. Biggio scored from third and the Astros drew first blood to lead, 1-0.

Houston increased its lead by sending eight batters to the plate in the top of the eighth. Two scored on a two-out single to center by Milt Thompson. Three were left on base when Hampton, who later in his career won five consecutive Silver Slugger awards for top-hitting pitcher in the NL, hit a weak grounder to second baseman Jose Hernandez, who flipped it to first baseman Mark Grace to end the inning. In the home half of the frame, the Cubs went down one-two-three and it was 3-0 Astros at the end of eight.

Maybe it was the thrilling suppression of another Astros rally. Maybe it was simply an ovation of fan appreciation2 for an extraordinary late-season seven-game win streak. Maybe the throng was exhorting the Cubs to stage just one more rally. Whatever the inspiration, the crowd of 28,297 spontaneously stood as one and vigorously cheered the Cubs as they jogged off the diamond for their last raps.

Center fielder Brian McRae reflected, “They rose as we got them out in the top of the ninth. They stayed on their feet and cheered. They went crazy.”3

Grace confirmed, saying, “They got us going when Hampton had us left for dead.”4

Hampton had been rolling thus far, retiring the Cubs in order six times in eight innings, allowing just two hits. He got Hernandez to ground out to shortstop to start the ninth inning.

But the Cubs hadn’t lost since before the Autumnal Equinox and when Grace hit a 2-and-2 pitch for a single, Hampton, who had thrown 113 pitches, was lifted for veteran closer Mike Henneman, acquired from the Detroit Tigers in August. The crowd remained standing. Sammy Sosa greeted Henneman with a single to center, moving Grace to third. Then Dunston lined a shot to left field for the third straight single, advancing Sosa to second and scoring Grace to cut the deficit to 3-1.

Former Astro Luis Gonzalez came on to pinch-hit with frenzied fans filling the field with fervent cheers. Gonzalez hit a groundball with eyes and though it didn’t leave the infield, it was good enough to jam the bags full of Cubs.

After four straight hits, the Cubs could reach out and touch victory yet again. Maybe there WAS magic in the air.

The crescendo of the “crazy crowd” continued when Cubs catcher Scott Servais (another former Astro) stepped to the plate. Servais hit a grounder to third base. Magadan threw to second base. Gonzalez was forced out, but Servais beat the throw to first; Sosa scored to make the score 3-2 as Dunston took third.

The drama continued when Howard Johnson came to the plate with two outs and runners on first and third. Henneman walked him  on a 3-and-2 pitch to jam the bags. Cubs manager Jim Riggleman inserted Bullett, a left-handed-hitter, as pinch hitter. Astros skipper Terry Collins countered by lifting his closer, the righty Henneman, for the lefty Dean Hartgraves.

“I told Scott, ‘This is a tough situation for the pitcher, not you,’” Riggleman said after the game.5
Hartzgraves walked Bullett on four pitches to bring home the tying run. 3-3.

Was the crowd a factor? Bullett thought so. “I could see how nervous he was. I thought, ‘I’m going to stand here until he throws a strike’ and he never did.”6 “That’s the most exciting walk of my life,” Bullett said.7

Hartzgraves was relieved of the hill and Doug Brocail came on to face McRae, who worked his at-bat to a full count but struck out to end the inning. Nonetheless, the Cubs had tied the score and the game moved to extra innings for the second day in a row.

Mike Perez came on to pitch the extra frame for the Cubs and retired the side, facing just three Astros batters. The Cubs came to bat in the bottom of the 10th. Any old kind of a run would do it for the Cubs.

Brocail was still on the hill for Houston and walked Hernandez to lead off the inning. Grace followed with a line-drive single to right, moving Hernandez to third. The Cubs jammed the bags for the second inning in a row when Sosa was intentionally walked.

After a force out at the plate, the bases were still loaded when Gonzalez stepped to the plate in another clutch situation against his former team. He worked a dramatic seven-pitch at-bat until he lashed a single to right field, scoring Grace to win the game.

Gonzalez reflected after the game, “It’s a lot of fun to beat a team that raised you and then traded you.”8  He added, “We got back in the game with the fans. It’s said the fans in Chicago are the best, and they are. It was 3-0 against us, and they would not give up on us. So, there was no give-up in our dugout.”9

“Not even Elvis has come back from the dead this many times,” wrote Barry Rozner of the Arlington Heights Daily Herald.10 It was the Cubs’ eighth straight victory and the Astros’ third straight extra-inning defeat.

“There’s almost no chance of our making the playoffs, but we’re taking care of business, and it’s fun.”11 “I guarantee you, we wouldn’t have won that game without the fans,” said Grace.12 When the Rockies lost that night, the Cubs remained alive in the playoff hunt.

A buzz of expectation rippled in Wrigleyville when the sun rose over Lake Michigan on Saturday morning, September 30.13 A glimmer of hope for a playoff spot remained with just two games left in the season. The Cubs needed a miracle, but all the tumblers had been clicking into place so far, so “hey-hey, holy mackerel,”14 miracles seemed possible.

But the clock struck 12 when the Astros held on for a one-run win of their own to eliminate the Cubs from playoff contention on the season’s next-to-last day. Likewise, the Rockies won their final two regular-season games to eliminate the Astros and claim their first-ever National League wild-card spot in only the third season of the franchise.

The author referenced Baseball-Reference and Retrosheet.org for box scores, play-by-play information, and other pertinent data.

The author viewed YouTube videos for perspective. This specific game was one of a few that were not broadcast on Chicago’s local WGN-TV so there was no video reference. However, an adjacent game on Saturday alludes to the event.  https://www.youtube.com/watch?v=jvItzZeUjT4&ab_channel=ChadBlanchard

2 The last weekend of the season at Wrigley Field is typically designated as Fan Appreciation Weekend.

13 “The Leadoff Man,” the Cubs’ TV pregame show from September 30, hosted by Cubs broadcaster Steve Stone, began filled with hope as Stone opens the broadcast saying, “The most amazing thing has happened. The Cubs continue to win. The Rockies continue to lose.” He then outlines the scenario by which the Cubs would make the playoffs. Game broadcast courtesy of YouTube.   https://www.youtube.com/watch?v=jvItzZeUjT4&ab_channel=ChadBlanchard.