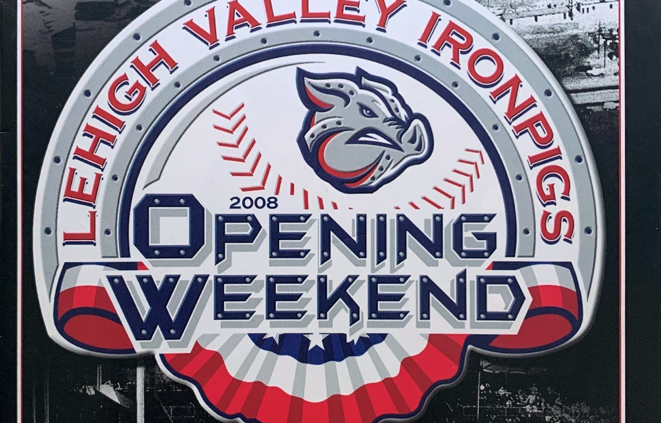 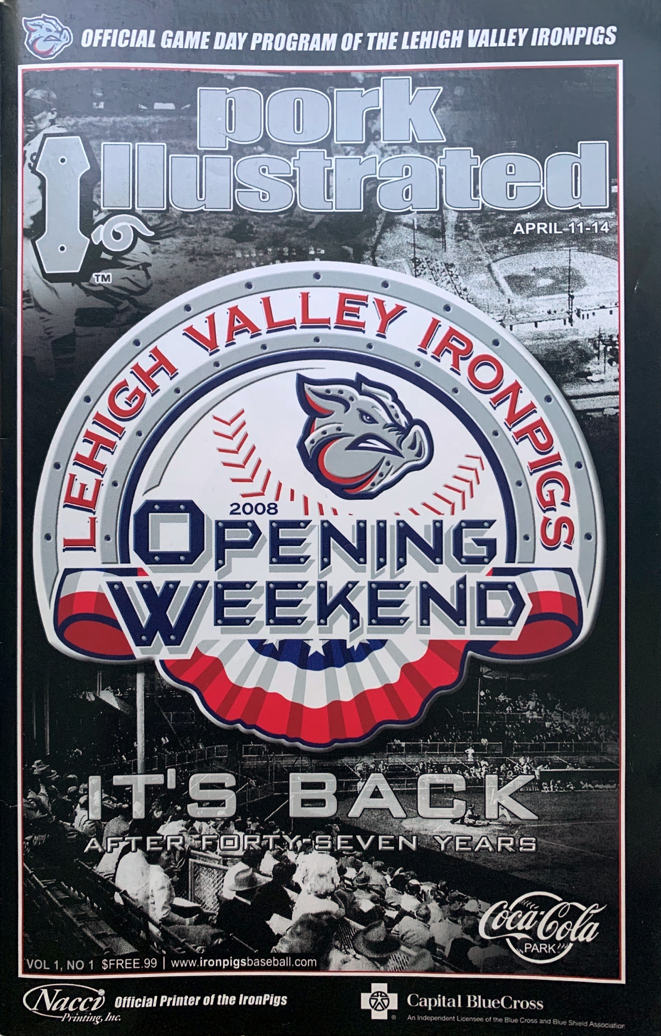 Upon their debut in 2008, the Lehigh Valley IronPigs quickly became one of the highest-drawing teams in the Triple-A International League.1 The Philadelphia Phillies’ top farm team, based in Allentown, Pennsylvania, has established itself as a supportive community presence, hosted future stars on the way up, and played the merchandising and promotion game as well as any other minor-league team.2 To a generation of young local fans, the IronPigs are the sum total of baseball in Allentown — period, full stop, end of report.

One reason the ’Pigs have been able to seize local hearts so firmly is that their home region in eastern Pennsylvania3 went 47 years without an affiliated minor-league baseball team.4 But the Lehigh Valley wasn’t always a baseball desert. Allentown’s minor-league history goes back to the 1884 Eastern League, and the city fielded teams in various leagues during most of the period from 1929 to 1960. This story focuses on the second game of a doubleheader on September 3, 1960 — the last affiliated minor-league game to be played in the Lehigh Valley before the IronPigs’ arrival at brand-new Coca-Cola Park in April 2008.

Today’s Lehigh Valley is heavy with Phillies and Yankees fans. (As of 2020, the Yankees’ Triple-A team plays up the road in Scranton/Wilkes-Barre.) In 1960, though, the region was home to the Allentown Red Sox, a Boston-affiliated team in the Class A Eastern League. Before the Red Sox came to town in 1958, Allentown had hosted St. Louis Cardinals farm teams for many years, and their home ballpark in the neighboring suburb of Whitehall was originally named Breadon Field after Cardinals owner and president Sam Breadon.5 By 1960 the park had been renamed Max Hess Stadium in honor of its new owner, a local department-store tycoon.6

The 1960 Allentown team was managed by Warren “Sheriff” Robinson, a Marylander who served on the New York Mets’ coaching staff in the 1960s and ’70s. Eight members of the squad spent time in the big leagues at some point. The best-known are probably two players who were called up to Boston in September 1960. Pitcher Tracy Stallard surrendered Roger Maris’s record-breaking 61st home run the following year, while infielder Marlan Coughtry appeared as Boston’s starting second baseman in Ted Williams’s final game and is briefly mentioned in John Updike’s famous “Hub Fans Bid Kid Adieu” piece chronicling the game for the New Yorker.7

When the Williamsport Grays, a Phillies farm club, came to Hess Stadium for the Red Sox’ final home games of the year on Saturday, September 3, both teams were in the midst of a tight pennant race. The top four teams in the six-team circuit would make the playoffs. While Williamsport had a firm grip on first, the Binghamton, Reading, Allentown, and Springfield (Massachusetts) teams were jostling for the final three spots.8

The Grays were managed by future big-league skipper Frank Lucchesi. The team included 11 players who played in the big leagues either before or after 1960, with the most notable including first baseman Danny Cater, outfielder John Herrnstein, and shortstop-third baseman Lee Elia, another future big-league manager. (Not all of the big leaguers who played for Allentown and Williamsport that year were on the rosters on September 3.)

Despite the pennant race and the holiday weekend, only 1,297 fans turned out to Hess Stadium for the Red Sox’ last day at home. Those who showed were rewarded with an eventful day of baseball. The “A-Sox,” as they were known on local sports pages, won the first game of the doubleheader 7-6 after fighting back from a 5-0 deficit after 3½ innings.9

For the nightcap, the Sox’ starting lineup included future big leaguers Ted Schreiber at second base and Guido Grilli on the mound. The Grays’ lineup included past or future major leaguers Norm Gigon in left field, Ted Savage in center, Cater at first, Elia at third, and Dick Teed at catcher, while Herrnstein came in at right field in midgame. Williamsport’s starting pitcher, 21-year-old righty Bob “Gunner” Gontkosky, was a local boy. He’d grown up in the Lehigh Valley village of Egypt — also home to Phillies star Curt Simmons — and had been a three-sport star at Whitehall High School, in the same suburb where Hess Stadium was located.10 Gontkosky had pitched three Eastern League one-hitters the previous year11 but faced control issues. In 1960 he walked 100 batters in 139 innings.

While the opener was a seven-inning game, the second game was slated for a full nine. Had it been a seven-inning affair, the Grays would have won: They pushed across a single run in the fifth, while Gontkosky held Allentown off the scoreboard through seven. The Grays scored again in the top of the eighth to make it 2-0, as Allentown relief pitcher George Moton allowed a runner inherited from Grilli to score. (Manager Robinson was not around to see this, as plate umpire Tom Ravashiere ran him from the game in the sixth inning for protesting pitch calls.12) Gigon drove in Teed for one of the Williamsport runs, while right fielder Charlie Fields drove in Gigon for the other.13

Allentown rallied in the bottom of the eighth. Joseph DeCandido, pinch-hitting for Moton, tripled.14 Shortstop and leadoff hitter Curt Jenson singled him home. Third baseman Jim Hendricks sacrificed Jenson to second, Gontkosky wild-pitched him to third, and Schreiber hit a sacrifice fly to tie the game, 2-2.15

Gontkosky and Allentown reliever Bob Tedesco swapped zeroes in the ninth and 10th innings, despite Tedesco hitting Herrnstein and Elia with pitches. In the bottom of the 11th, Allentown broke through again. Left fielder Paul Jernigan reached on a fielder’s choice and took second on a wild pitch, Gontkosky’s third of the day.16 Catcher Bob Hoffer hit a line-drive single into left field to score Jernigan with the winning run. Tedesco got the win, while Gontkosky took the loss, walking seven and striking out nine in 10⅓ innings.

Despite the efforts of an independent “Save Baseball for the Lehigh Valley” group,18 A-Sox owner Joe Buzas announced the shift of the team to Johnstown, Pennsylvania, in December 1960.19 While Allentown was closer to Buzas’s home and business interests in New Jersey, reports indicated that he received positive financial terms from Johnstown leaders.20 Buzas also said years later that Max Hess had told him about potential plans to tear down the stadium in Allentown.21 The 1961 season was the team’s only one in Johnstown. When 1962 arrived, Boston’s Eastern League affiliate had moved yet again, to York, Pennsylvania.

Attempts to bring a new team to Allentown over the next few years came to nothing, and 3,400-seat Hess Stadium was torn down in 1964.22 After years of starts and stops, the property — long since sold off by Max Hess — was developed into the Lehigh Valley Mall, a regional megamall. Its first department store opened in early September 1976, almost but not quite 16 years to the day from the last minor-league ballgame on the site.23 The mall remained a regional shopping hub as of 2020.

The Lehigh Valley had a few more flirtations with Organized Baseball over the years, including one with a developer that partially built a ballpark but never finished it; the site was eventually sold for other development.24 Finally, the arrival of experienced minor-league owners Craig Stein and Joe Finley, plus state grants to support construction of a new ballpark, brought the IronPigs to Allentown.25 Forty-seven years is a long time, but the success of the IronPigs has already made Allentown’s time in the baseball wilderness seem very distant indeed. 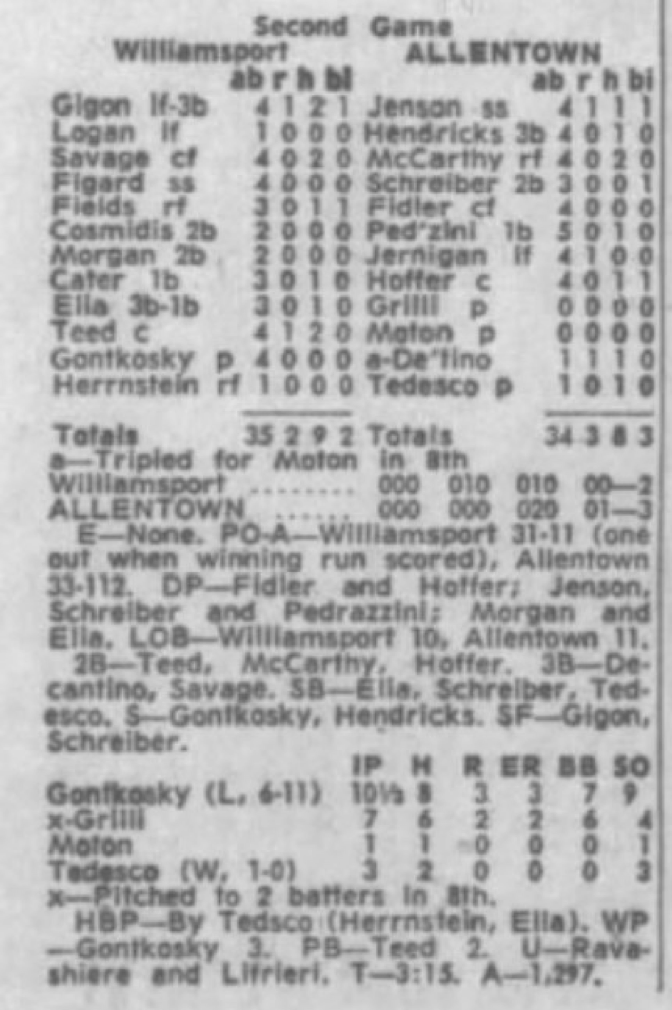 1 Based on a review of International League attendance on milb.com, accessed September 4, 2020.

2 Among other honors, the team in 2019 won Minor League Baseball’s Larry MacPhail Award, given to the top promotional team in the minors. Announcement accessed on milb.com September 4, 2020.

3 To be precise, the Lehigh Valley metropolitan statistical area, as defined by the US government, includes the Pennsylvania counties of Carbon, Lehigh and Northampton, as well as neighboring Warren County, New Jersey. Its largest communities are the Pennsylvania cities of Allentown, Bethlehem, and Easton.

4 From 1997 to 2003, Allentown was home to the Allentown Ambassadors of the independent and unaffiliated Northeast League. They played in Bicentennial Park, a lopsided, city-owned facility.

8 As per Eastern League standings printed in the Morning Call in the first week of September 1960. The league’s sixth team was in Lancaster, Pennsylvania.

14 The Associated Press/Grit game story cited above refers to the pinch-hitter as “Al DeCantino” and says he was a recent addition from Waterloo. Baseball-Reference’s database of minor-league players does not list an Al DeCantino. But it does list infielder Joseph DeCandido as having played for both the Waterloo (Iowa) Hawks and the Allentown Red Sox in 1960, and credits DeCandido with a double and a triple in four appearances with Allentown. The Waterloo Hawks were a Red Sox farm club in the Class D Midwest League.

16 His catcher, Teed, was also charged with two passed balls.