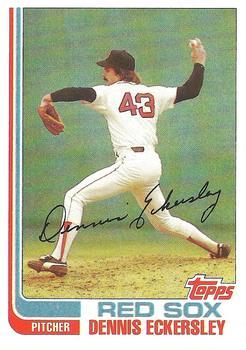 On September 30, 1982, a recovering alcoholic and former Red Sox reliever was working at his bar on Beacon Street when a Boston University graduate student came in for a drink with her fiancé—and boss. Much to the student’s surprise, her fiancé decided to leave the bar and return to his ex-wife. Now unemployed, she was offered a job at the bar after it was discovered that she had an unusually high aptitude for remembering drink orders.

At least that’s what millions of viewers around the country saw on NBC as a new television series debuted that night. This, of course, was the initial episode of Cheers, which was set in Boston and utilized the real Bull & Finch Pub for its exterior shots. Over the next 11 years, viewers tuned in to watch the hijinks of Sam Malone and his patrons. But while viewers across the country were watching a fictional Red Sox reliever, what were the actual Red Sox doing in 1982?

They were wrapping up yet another disappointing season. They were contenders early on but faded with the heat of the summer. They peaked on June 23, when they had a five-game lead in the American League East. They last held sole possession of first place in the division on July 30. Going .500 in July and August put them on the ropes, and a 13-15 September knocked them out of contention entirely. But a late-September visit from the Milwaukee Brewers gave the Red Sox one last chance to affect the division race.

The division had come down to the Brewers and Baltimore Orioles. The Red Sox were a distant third, 9½ games out of first. The Brewers had a four-game lead with five games left and a season-ending series with the Orioles ahead, starting with a doubleheader the next night. The Brewers had already put the Red Sox away in the first two games of the series. With their magic number at 2, they hoped to clinch the East that night. If the Brewers won and the Orioles lost in Detroit, that season-ending series would be a moot point for determining the division standings.1

On this cloudy, brisk New England fall night with 21,268 in attendance, the Red Sox sent ace Dennis Eckersley to the mound trying to avoid a sweep. Looking to wrap up the division and stamp their ticket to the American League Championship Series, Milwaukee turned to Jim Slaton. Slaton was a swingman who got the start because of the next day’s doubleheader in Baltimore.2 If the Brewers were going to put away their division rivals in head-to-head play, they would have to make sure that their best pitchers were rested.3

Eckersley started the game off by striking out Paul Molitor and retiring Robin Yount and Cecil Cooper on groundballs. The Red Sox were poised to strike in the bottom of the first after Carl Yastrzemski’s two-out single moved Jim Rice to third, but Slaton avoided damage by inducing a lineout by third baseman Carney Lansford.

Eckersley threw another one-two-three inning in the top of the second. In the bottom of the inning, the Red Sox once again tested Slaton. After setting down rookie Wade Boggs with a groundout, Slaton gave up a single to left to Rick Miller, who stole second with Glenn Hoffman batting. Hoffman grounded out to short for the second out; Gary Allenson walked to put runners on first and second with two outs.

But Jerry Remy was unable to capitalize, grounding to first for the final out of the inning. The game remained tied going into the third. The inability of the Red Sox to take advantage of these early opportunities concerned manager Ralph Houk, who told reporters, “I was getting worried. We hit seven line drives in two innings and couldn’t score. I thought the Brewers were destined to win.”4

Eckersley started the third by striking out Roy Howell. Charlie Moore  singled to left. Moore stole second, but Eckersley retired the next two batters; the Brewers had failed to capitalize.

Slaton began the bottom of the inning well enough. He got Dwight Evans out on a fly ball to center. Jim Rice reached first on a single to left, but Carl Yastrzemski flied out to right for the second out.

This was looking to be Slaton’s cleanest inning yet but he had to set down Lansford to get out of it. Slaton almost did, by inducing the reigning American League batting champion to hit a routine grounder to short,5 but Yount’s error allowed Lansford to reach base. Rice moved to third.

Boggs came to the plate in a skid, having recorded two hits in his last 39 at-bats.6 Despite his recent struggles, he was emerging as one of the best hitters in baseball and was batting .343 entering the game. He recaptured his earlier magic with a double to left that scored Rice. The Red Sox took the lead, 1-0.

Boston went back on the attack in the fourth. Allenson walked; Remy’s sacrifice moved him to second. Evans doubled to left center, driving in Allenson. Rice followed with a single to left to score Evans for a 3-0 lead.

That finished Slaton. Brewers manager Harvey Kuenn brought in Jamie Easterly, who inherited Rice on first. Yastrzemski’s single moved Rice to third. Easterly struck out Lansford for the second out, but Boggs came through with another timely hit, a single to left center to bring Rice home. The Red Sox now led 4-0.

Eckersley continued to cruise against Milwaukee’s league-leading “Harvey’s Wallbangers” offense. Yount threatened with a double to left. But it was the only hit of the inning and Eckersley recorded another scoreless inning.

In the bottom of the sixth, Moose Haas came on to replace Easterly, who had kept Boston scoreless in the fifth. After Evans lined out to right to start the inning, the Red Sox built their lead with another offensive surge. Haas gave up three straight singles, to Rice, Yastrzemski, and Lansford. With Rice on third base for the fourth time in the game, Boggs drove him in with a sacrifice fly. Miller scored Yastrzemski on a single to left center. It was now 6-0 and the Brewers’ hopes of clinching the division at Fenway Park were dimming.

The Brewers failed to score in the top of the seventh and the Red Sox piled on with an Evans home run in the bottom of the inning to extend the lead to 7-0.

Milwaukee finally made a home-run-fueled charge in the eighth but it fell short. Jim Gantner led off with a single, and Molitor’s two-run homer broke the shutout. Yount followed with a single, and Cooper hit another two-run home run. Boston’s lead was down to 7-4, and Eckersley’s night was done. Houk summoned Bob Stanley from the bullpen.

Ted Simmons greeted Stanley with a double off the left-field wall.7 There were still no outs and formidable veteran Ben Oglivie was up next, with major-league home-run leader Gorman Thomas following in the parade of sluggers. But Stanley was up to the challenge. He retired Oglivie and Thomas on groundballs. Roy Howell fanned to end the inning.

The Red Sox extended their lead to 9-4 in the bottom of the eighth with a pinch-hit two-run home run by Tony Pérez. Although Stanley yielded two singles and a stolen base, he closed out Milwaukee in the ninth.

To make matters worse for the Brewers, the Orioles won on a four-run ninth-inning rally at Detroit. Milwaukee now had to win one game against Baltimore in order to take the division.8 And as it happened, it took the Brewers until the final game of the season to get that win and seal their division title.9

As for that TV bar on Beacon Street? Tensions were running high there too. Later that fall, waitress Carla Tortelli nearly lost her job for physically assaulting a New York Yankees fan.10 Over the years, the bar became a stop for Boston sports figures, both real and fictional. Boggs appeared on the show in 1988, a fictional Red Sox reliever used Sam’s lucky bottle cap to help him overcome a slump, fictional Boston Bruins goalie Eddie LeBec married Ms. Tortelli, and Boston Celtics star Kevin McHale appeared in multiple episodes.

“Cheers” gave Boston sports a presence in prime time for the next 11 years.

2 This was Slaton’s seventh start of the 1982 season. He had last started on August 10.

6 Michael Madden, “Red Sox Leave Brewers Hanging, 9-4,” Boston Globe, October 1, 1982: 38. Boggs had singled in five trips at home against Boston on September 20; afterward, but for a double on September 26, he was hitless entering this game. His average had dropped from .371 to .343. Boggs finished the season at .349 and won the AL batting title the next season.

9 Baltimore outscored Milwaukee 26-7 in taking the first three games of the final series, tying the race. The Brewers came back to cruise 10-2 behind Don Sutton, acquired at the 1982 trade deadline, to win the division title in the last game of the season, on October 3.