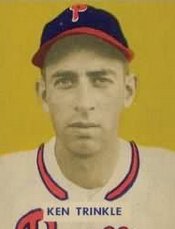 The New York Giants and the Pittsburgh Pirates were to play the initial game of a three-game series at Pittsburgh’s Forbes Field on Monday, September 8. The Giants had just concluded a four-game series against the Brooklyn Dodgers at the Polo Grounds. The Giants split the four-game set with more than 166,000 fans attending. After the last game with the Dodgers, the Giants’ record was 68-64.

The Pirates were struggling, having lost six of their last seven games. Their record now stood at 55-79. The season had been disappointing after they acquired slugger Hank Greenberg in the offseason from the Detroit Tigers for $75,000.1 In 1938 Greenberg had come close to breaking Babe Ruth’s record of 60 home runs in a season, hitting 58. To aid his home-run exploits, the Pirates shortened the distance to the left-field foul pole from 365 feet to 335.2 The area behind the left-field fence was now called Greenberg’s Gardens.

While the Pirates had Greenberg and the young Ralph Kiner, the Giants had sluggers Johnny Mize, Walker Cooper, Willard Marshall, and Sid Gordon. Greenberg, Kiner, and Mize are Hall of Famers.

For this contest the Giants started upon Sheldon Jones and the Pirates started 39-year-old forkballer Fritz Ostermueller. The Giants were managed by their former star slugger, nice guy Mel Ott, who had hit 511 home runs in his career. Billy Herman managed the Pirates. Both are in the Hall of Fame. The umpires were Beans Reardon at home plate with Larry Goetz at first base and Al Barlick at third. Barlick was also enshrined at Cooperstown; some feel Reardon and Goetz also deserve the honor.

Ostermueller retired the Giants in the first inning with a walk to Bobby Thomson the only blemish. In the bottom of the first, a bizarre play resulted in the Pirates scoring an unearned run.  Frankie Gustine doubled with one out. Billy Cox popped out for the second out, and Kiner walked. Greenberg hit a groundball to third baseman Jack “Lucky” Lohrke, whose throw to second to force Kiner pulled second baseman Bill Rigney off the bag. Kiner, thinking Rigney had dropped the ball, continued running to third base. Gustine, who had reached third, broke for home, drawing a throw from Rigney that went past Cooper, the Giants catcher. Gustine scored, with Greenberg and Kiner now at second and third.3 Wally Westlake’s grounder to shortstop ended the inning.

Neither team scored in the second, and the Giants were retired in order in the top of the third. In the bottom of the inning, the Pirates scored three runs. Gustine led off with a single and, after two strikeouts, Greenberg walked. Westlake was hit by a pitch, loading the bases, and a walk to Jimmy Bloodworth forced a run home. Joe Beggs replaced Jones and Clyde Kluttz greeted him with a two-run single.

The fourth inning was scoreless. So was the fifth, though two-out walks to Gordon and Lohrke broke a string of 12 consecutive batters retired by Ostermueller.

In the bottom of the fifth, Andy Hansen replaced Beggs for the Giants and Greenberg greeted him with a single. After an out, Bloodworth and Kluttz singled, loading the bases. Ostermueller’s fly ball to center field sent Greenberg home. Gene Woodling ended the inning by grounding out. The Pirates now led 5-0.

In the top of sixth, Rigney led off and singled, the first hit off Ostermueller. Buddy Kerr also singled. But Ostermueller struck out Thomson and Mize and got Cooper on a fly out to center. In the bottom half of the inning, Lloyd Gearhart replaced Thomson in center field for the Giants as Bobby’s trick knee acted up.4 The Pirates went out in order as did the Giants in the top of the seventh. In the bottom of the seventh, the Pirates’ Greenberg led off with a walk and took second on Westlake’s sacrifice. Bloodworth and Kluttz then walked. With the bases loaded, Ostermueller laid down another bunt. He was thrown out, but Greenberg scored and the other runners moved up. Both scored on Woodling’s single. Gustine’s fly out ended the inning with the Pirates ahead 8-0.

As the game entered the top of the eighth inning, the Pirates’ Ostermueller had allowed just two hits. Leading off, Ernie Lombardi batted for Hansen and singled to left field. Buddy Blattner, running for the slow-footed Lombardi, was forced out at second on Rigney’s groundball. But Kerr singled and Gearhart was safe at first when center fielder Woodling dropped his fly ball. The bases were loaded, and Mize’s double off the screen in right field brought home two runs.5 Cooper followed with a single, and Gearhart and Mize scored. Cooper went to second on a grounder by Marshall and scored on Gordon’s single. After he walked Lohrke, Ostermueller was replaced by Jim Bagby Jr. The pitcher’s spot, now occupied by pinch-runner Blattner, was next and Joe Lafata batted for Blattner. After a balk by Bagby moved runners to second and third, Lafata’s hit scored Gordon and Lohrke. Lafata was thrown out by Woodling trying to get to second, and the inning was over. The Giants had scored seven runs and the Pirates eight-run lead had been trimmed to one run. The score was 8-7 entering the bottom of the eighth. Woodling’s error had proved costly, leading to four unearned runs.

The Giants’ Ken Trinkle faced the Pirates in the eighth and gave up just a two-out walk to Greenberg. In the top of the ninth, with Bagby still pitching, Rigney led off with a double and went to third on Kerr’s sacrifice. Gary Gearhart, who had replaced Thomson, sent a drive into Greenberg Gardens, giving the Giants an improbable 9-8 lead. Bagby was replaced by Al Lyons, who was greeted by Mize’s double. Cooper grounded out and Marshall was walked intentionally. Gordon followed with a single, knocking in Mize with the Giants’ 10th run. Lohrke’s grounder ended the inning with the Giants leading 10-8.

Ken Trinkle stayed on the mound to close out the game. The Pirates didn’t go quietly. Kluttz singled with one out. After Bill Salkeld, pinch-hitting for Lyons, flied out, Woodling singled. With two runners on, Trinkle retired Gustine on a popup to shortstop, sending the small crowd of 3,936 home mostly unhappy.6 The hitting hero for the Giants was Gearhart, who hit the two-run home run in the ninth. Kluttz had three hits and Woodling two for Pittsburgh. Trinkle was the winning pitcher and Bagby took the loss.

The Giants won the next two games of the series, and when it was over, the Pirates found themselves in the National League cellar. The Giants had a historic year, finishing 81-73 but setting a major-league record with 221 home runs.7 The Pirates ended up sharing the cellar with Philadelphia, both in last place with 62-92 records. As the season was about to conclude, the Pirates fired manager Herman.

On an individual basis, Mize and Kiner tied for the home run lead in the major leagues with 51. Greenberg had a rather disappointing season, hitting only 25 home runs, even with the shortened fences. Greenberg retired after the 1947 season; Mize and Kiner continued to hit home runs, tying for the National League lead with 40 in 1948. In 1948 Leo Durocher replaced Ott as manager of the Giants. With Durocher at the helm, the Giants underwent significant roster changes, and won the 1951 pennant in their historic playoff in 1951 decided by Bobby Thomson’s Shot Heard ’Round the World. The Pirates rebounded in 1948 and finished fourth under new manager Billy Meyer. However, they then floundered and Branch Rickey was hired as general manager in 1950. A long rebuild occurred which resulted in a 1960 World Series victory.