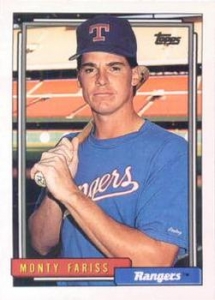 Drafted out of high school in the seventh round by the New York Mets in 1985, Monty Fariss opted to play college baseball at Oklahoma State, where he helped the Cowboys to the College World Series in each of his first two years, including a runner-up finish to Stanford in 1987. In his junior year, Fariss batted .397 with 30 homers and led the country with 114 RBIs.1

Fariss’s performance at Oklahoma State led the Texas Rangers to select him sixth overall in the 1988 amateur draft, but he was unable to duplicate his college success in the pros. He had one shining moment on September 8, 1991, however, when his first major-league hit cleared the bases – capping a four-run, ninth-inning rally – and lifted the Rangers to a 7-6 win over the Chicago White Sox in front of a Sunday-afternoon crowd of 18,866.

With less than a month left in the season, the White Sox still had an outside shot at the AL West division title; they were in second place with a 75-62 record, 7½ games behind the Minnesota Twins. From August 12 to 30, the White Sox endured a stretch in which they lost 16 of 19. But they entered this game having won seven of eight , including the first three games of the series against Texas.2 Texas was in fourth place, 11 games back with a record of 70-64.

Through the first three innings, Brown held the White Sox hitless while working around a two-out walk to Warren Newson in the first and a leadoff walk to Joey Cora in the third.

McDowell held Texas scoreless through the first four innings, allowing just one hit, a two-out single in the first by Ruben Sierra. In the second he walked the first two batters before striking out Dean Palmer and Ivan Rodriguez and getting Jeff Huson on a foul pop to third.

Chicago took a 3-0 lead in the fourth. Newson walked and scored on Dan Pasqua’s double to left-center. Lance Johnson tripled on the next pitch to score Pasqua. After Craig Grebeck walked, Ron Karkovice forced him at second with a grounder to shortstop that scored Johnson.

Tim Raines started the fifth for the White Sox with a double to center. After moving to third on a groundout by Robin Ventura, he was thrown out at the plate trying to score on a grounder back to Brown. Pasqua struck out to end the inning.

The Rangers got on the scoreboard in the fifth. Rodriguez led off with a double past third and scored on Huson’s single up the middle to make the score 3-1.

The White Sox got the run back in the seventh when Raines doubled with one out and scored on a single by Ventura. Newson followed with a single to put two on, but Brown retired Pasqua on a fly ball. Johnson’s grounder to second forced Newson to keep the score at 4-1.

With one out in the seventh, McDowell walked Palmer and Rodriguez. Scott Radinsky entered in relief and gave up a pinch-hit double to Brian Downing that scored Palmer and moved Rodriguez to third. Rafael Palmeiro’s fly to right brought home Rodriguez, cutting Chicago’s lead to 4-3.

In the eighth, Karkovice grounded a one-out double into left. Sammy Sosa, who had entered the game in the fifth inning, followed with a home run3 into the stands in left field to increase the White Sox’ lead to 6-3. Brown retired Ozzie Guillen and Raines on grounders to end the inning – and his day on the mound. He had allowed six earned runs on eight hits and five walks.

The Rangers threatened in the bottom of the inning but failed to score. Mike Stanley pinch-hit for Kevin Reimer and drew a walk.

Chicago closer Bobby Thigpen replaced Radinsky. A year after saving a major-league-record 57 games4 with a 1.83 ERA, Thigpen had not been as dominant this season. Although he entered the game with 28 saves, his ERA was 3.08 and he had blown seven saves.

After Juan Gonzalez flied out to left, Rob Maurer5 walked to put two on. But Thigpen struck out Palmer, and Rodriguez’s grounder to shortstop forced Maurer at second.

Jeff Russell walked Ventura to start the ninth. After Rodney McCray struck out, Pasqua bounced into a 4-6-3 double play to end the inning and keep the score 6-3 going into the Rangers’ final at-bat.

Jack Daugherty pinch-hit to start the bottom of the ninth. He hit a routine grounder to Grebeck but reached first when the shortstop’s throw pulled Pasqua off the bag.6 Mario Diaz entered to pinch-run.

Palmeiro walked but Julio Franco struck out. Sierra grounded a single to left to score Diaz. Geno Petralli pinch-hit and lined to right field, where Sosa made a diving catch7 for the second out. Gonzalez, hitting just .143 in his last 49 at-bats, was hit by Thigpen’s second pitch to load the bases.

Fariss was called on to hit for Harris.8 After hitting .271 with 13 homers and 73 RBIs in Triple A, Fariss had made his major-league debut two days earlier; he was 0-for-3 with two strikeouts in two games. With a 1-and-1 count, he hooked a drive down the third-base line, past a diving Ventura.9 Palmeiro and Sierra scored easily. When the ball bounced against the railing and spectators reached for it, third-base umpire Joe Brinkman ruled fan interference.10 Home-plate umpire Derryl Cousins decided that Gonzalez would have scored from first base had the interference not happened. He awarded Gonzalez home, giving the Rangers a 7-6 win.

Later he added, “We played our tails off, work hard to get where we were and it gets away from us. A shame. A real shame.”12

Rangers skipper Bobby Valentine agreed with the decision. “If the fan doesn’t touch it, does he score? Of course, he does. It’s the right call,” he remarked.13

Rangers third-base coach Dave Oliver chipped in, saying, “Juan going hard all the way makes the play. With two outs I would have sent him [home]. You have to make them throw him out in that situation.”14

Whether the call was correct or not, Fariss was happy after the game. “It was loud out there, standing on second base,” he said. “That’s the kind of situation you want to be in. That’s what I’ve been looking for. I tried to go up there and relax. I sure wasn’t looking for a changeup. I thought he’d try to blow me away with a fastball.”15

Fariss ended the season hitting .258 in 19 games with a homer and six RBIs. But the biggest obstacle for him to stick in the major leagues was his defensive limitations. As a 6-foot-5 shortstop, Fariss had committed 51 errors in Double A in 1989 and another 46 – most of them (39) at shortstop – the following year while splitting time between Double A and Triple A. Before his call-up, he had changed positions in Triple A, but committed 26 errors at second base and two in the outfield.

The Rangers were considering making Fariss an outfielder for the 1992 season. “All I’ve heard people tell me is that he can shag fly balls out there. Even when he was playing shortstop, people were telling me that,” said Valentine.16

Fariss agreed, saying that “physically, there is no reason I couldn’t [play in the outfield]. It’s real open out there, especially after never being off the dirt before,” Fariss said. “I just want to be able to make the routine plays. It’s a matter of getting experience, learning the angles.”17

He added, “I just want to make the team [next year] and show people I can play. Anywhere I can do that is fine with me.”18

Unlike most rookies, Fariss did not get the ball from his first major-league hit to keep as a souvenir – upset at the controversial ending, White Sox shortstop Guillen had refused to give it up20 – but he did have a fond big-league memory.

The author attended this game during a weekend trip to Arlington with two longtime friends from his high-school days. They also attended the previous day’s game in which the White Sox beat the Rangers 11-6. 2 Overall, they had won seven straight games against the Rangers, and a win in this game would give them their first sweep in Texas since September 1985.

3 It was the 29th of the 609 home runs Sosa hit in his 18-year career. It was the last homer the 22-year-old Sosa hit for the White Sox before being traded to the Cubs shortly before the 1992 season.

4 Thigpen’s record was broken in 2008 when Francisco Rodriguez saved 62 games for the Los Angeles Angels.

5 This game was the major-league debut for Maurer. He finished 0-for-2 with two walks before Donald Harris ran for him in the eighth. He would appear in just 29 games in 1991 and 1992, finishing 3-for-25 with three RBIs and three walks.

8 Harris had stayed in the game as the Rangers DH after running for Maurer.

9 Fariss and Ventura were teammates at Oklahoma State. Despite the big numbers put up by Fariss in 1988, Ventura won the Golden Spikes Award as college baseball’s best player. He hit .391 with 26 home runs and 96 RBIs and scored 96 runs. In 1987, Ventura had set an NCAA record when he got a hit in 58 consecutive games. The streak ended in the College World Series against Stanford; the starting pitcher for the Cardinal was his future teammate Jack McDowell. In the 1988 draft, Ventura was selected 10th by the White Sox, four spots behind Fariss.

19 Fariss came close to remaining with Texas. He was the 70th pick out of 72 players chosen in the expansion draft.