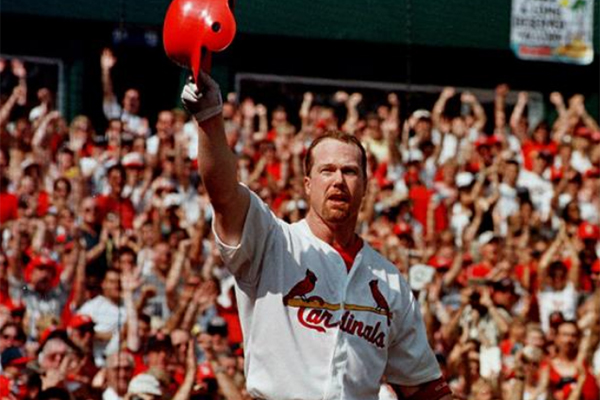 The 1994 season was one of the darkest in baseball history. A players strike in August led to the first season in 90 years without a World Series, and fans were not happy. Average game attendance dropped by 6,000 fans from 1994 to 1995.1

Yet, in the two years between 1996 and 1998, total attendance rose by 10 million.2 Two of the biggest reasons why, both literally and figuratively, met in September 1998 with history on the line.

The National League Central Division battle on September 8 at Busch Stadium between the 80-64 Chicago Cubs and the 70-73 St. Louis Cardinals was significant for both teams. For the Cardinals, any hope at earning the NL’s wild-card spot required more wins like their 3-2 victory over the Cubs the day before. For the Cubs, they entered tied with the New York Mets for the wild card, looking to keep pace.

But the strongest spotlight was on the teams’ star sluggers: Sammy Sosa and Mark McGwire.

The chase for the home-run record was the story of the season. McGwire – dealt from the Oakland A’s to the Cardinals in July 1997 – and Ken Griffey Jr. of the Seattle Mariners began the year as the most likely to beat the 61 home runs Roger Maris hit in 1961. McGwire had hit 58 home runs in 1997, while Griffey Jr. hit 56, making them the only major leaguers with more than 52 homers in a season since Maris’s record-setting campaign.3

By the end of May 1998, McGwire had 27 home runs and was on pace to catch Maris.4 But June saw an unexpected contender enter the battle, one who had never hit more than 40 home runs in a season: Sammy Sosa.5

Sosa entered June with 13 home runs – and ended with 33. His 20 home runs in June broke the major-league record for home runs in a month, set by Rudy York in August 1937.6 At the start of the season, “McGwire often seemed annoyed at all the attention” around the chase, but the 29-year-old Sosa’s strong challenge seemed to relax the Bash Brother.7

By the end of August, both had 55 home runs,8 but McGwire, opening September with back-to-back two-homer games, surged ahead of Sosa. His first-inning homer off Chicago’s Mike Morgan in the series opener on September 7 tied Maris at 61, and put him three ahead of Sosa heading into the second game against the Cubs.9

As a crowd of 43,688, St. Louis’ biggest non-opener regular-season weeknight draw since September 1997 and a demonstration of the home-run chase’s impact on fan interest,10 filled Busch Stadium, Kent Mercker, a 30-year-old left-hander on his way to a nine-team, 18-season career, took the mound for the Cardinals.

He immediately got into trouble. After a leadoff out, Jose Hernandez walked and took second on a wild pitch. Mark Grace singled to give Chicago a 1-0 lead.

This brought Sosa to the plate for the first time, and he singled Grace to second. Gary Gaetti – who played for the Cardinals until he was released in August – singled later in the inning to make it 2-0 after the first.

Veteran righty Steve Trachsel started for the Cubs, and McGwire had his first chance at history with two outs and nobody on in the bottom of the first. But he grounded out to end the inning.

In the third, Sosa took his second at-bat following a Hernandez fly out and a Grace single, but he grounded into a double play to end the inning.

In the fourth, Gaetti hit a one-out single. He advanced to second on Mercker’s balk, then Mickey Morandini’s walk and Scott Servais’s single loaded the bases with one out. Mercker escaped the jam by fanning Trachsel and getting Lance Johnson to fly out.

McGwire’s second at-bat came in the bottom of the fourth. Delino DeShields grounded out and Fernando Tatis Sr. struck out, bringing the 34-year-old slugger to the plate.

The crowd in St. Louis roared as McGwire stepped to the plate, and continued roaring as he hit the very first pitch he saw down the left-field line, just clearing the wall for a home run. As he rounded the bases, McGwire missed first and had to return to step on it, leading Fox announcer Joe Buck to exclaim, “Touch first Mark: You are the new single-season home run king!”11

The Cubs infield and catcher congratulated Mark as he circled the bases, where the Cardinals met him to celebrate. Sosa himself came out from right field to celebrate with McGwire, and after a five-minute celebration, McGwire took a microphone to thank Sosa in kind.

The battle was won. McGwire was the new king of the home run.

Yet, the game was not over, and the Cardinals still trailed 2-1 after the fourth.

Sosa came to bat in the fifth and drew a walk, but that was all the Cubs could muster. Chicago held the lead until the bottom of the sixth, when Trachsel ran into trouble. J.D. Drew, making his major-league debut just three months after the Cardinals had selected him fifth overall in the June draft,12 pinch-hit for Mercker to start the inning, but struck out.

But Eli Marrero drew a walk and advanced to second on Trachsel’s balk. DeShields followed with a single to left, scoring Marrero to tie the game at 2-2. DeShields reached second on an error by Glenallen Hill, and after Tatis flied out, McGwire was at the plate again.

Trachsel would not be beaten twice; he intentionally walked McGwire to bring Ray Lankford to the plate.

Lankford capitalized by hitting a three-run home run to center field, his 27th of the season, giving the Cardinals a 5-2 lead. Ron Gant followed with another home run, ending Trachsel’s day and extending the lead to 6-2, St. Louis. Lefty Terry Mulholland came on to get the final out.

Rich Croushore took the mound in the top of the seventh, facing Sosa with a runner on first and one out. Although Sosa flied out, a single and walk loaded the bases and led to a pitching change. Lance Painter replaced Croushore to face pinch-hitter Matt Mieske, and Painter induced a fly out to end the inning.

Painter wasn’t as fortunate in the eighth. Servais and Manny Alexander hit consecutive singles to start the frame for Chicago, and Johnson’s groundout moved the runners to second and third with one out. John Frascatore relieved Painter, but Hernandez’s groundout scored Servais to cut the lead to 6-3. Grace flied out to end the inning.

Don Wengert pitched the bottom of the eighth. McGwire came to the plate with two outs and nobody on. This time, McGwire walked, but was stranded on first.

Juan Acevedo took the mound to close the game for St. Louis. His first batter was Sosa, who struck out. Hill doubled with one out, but the Cubs failed to score, giving the Cardinals a 6-3 win.

Mercker earned the win for the Cardinals, while Acevedo earned his seventh save. Trachsel was saddled with the loss for the Cubs. Yet the game would not be remembered by the winner or loser; it would be remembered by McGwire’s home run.

Sosa went on a home-run tear of his own soon after this game, including two-homer games against the Milwaukee Brewers on September 13 and September 23. On September 25 he briefly pulled ahead of McGwire. But both men had 66 home runs after that day’s games, and McGwire hit four more to secure the record at 70.13

Sosa’s Cubs finished 89-73 and defeated the San Francisco Giants in a Game 163 tiebreaker to earn the NL wild card. They would not win again in 1998; a sweep by the Atlanta Braves in the Division Series ended their season. The Cardinals could muster only an 83-79 finish, missing the playoffs entirely.

While baseball’s battle for single-season home-run king in 1998 captivated baseball fans at the time, findings after the fact have tainted McGwire and Sosa’s accomplishments in the eyes of some baseball fans. In 2003 Sosa tested positive for steroids, a fact revealed around a decade later. Similarly, McGwire admitted he was not clean either.14

In addition to the Sources cited in the Notes, the author consulted the Baseball-Reference.com and Retrosheet.org websites for pertinent material and the box scores noted below, along with information on the 1998 Cardinals and Cubs.

6 This record still stood as of the 2022 MLB season, with only Giancarlo Stanton in August 2017 coming close, with 18 home runs.

12 Drew was drafted by the Phillies in 1997, but refused to sign. He played a year in independent ball before reentering the draft in 1998.