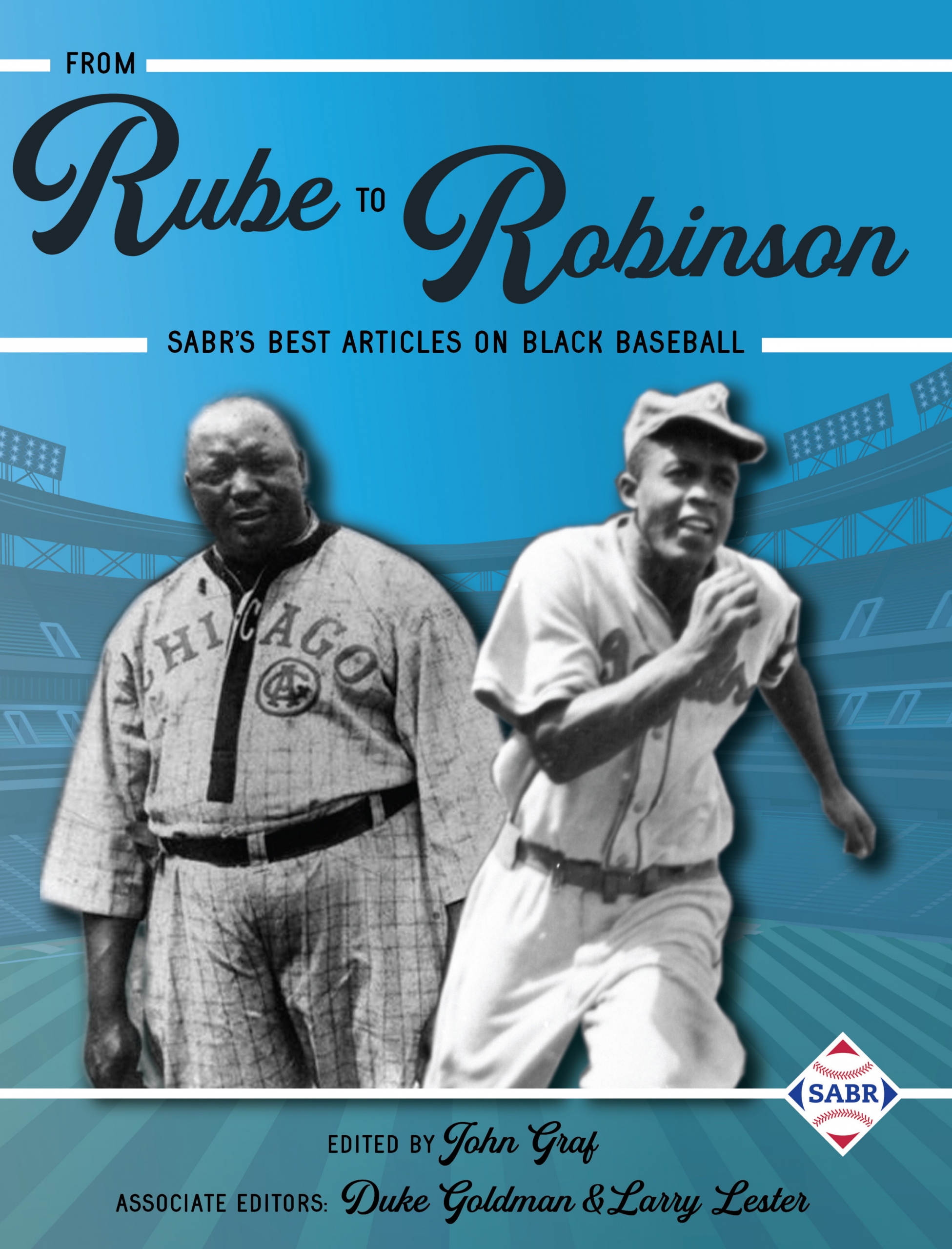 From Rube to Robinson brings together the best Negro League baseball scholarship that SABR has ever produced, pulled from its journals, Biography Project, and award-winning essays. The book includes a star-studded list of scholars and historians, from the late Jerry Malloy and Jules Tygiel, to award winners Larry Lester, Geri Strecker, and Jeremy Beer, and a host of other talented writers. The essays cover topics ranging over nearly a century, from 1866 and the earliest known Black baseball championship, to 1962 and the end of the Negro American League.

Todd Peterson’s “May the Best Man Win: The Black Ball Championships 1866-1923” opens the volume and looks at championships that preceded the Colored World Series of 1924. The late Jerry Malloy covers an early circuit in “The Pittsburgh Keystones and the 1887 Colored League.” Malloy points out that the short-lived league garnered the acceptance of the National Agreement of 1883, something no other Black organization was able to do.

Not only did Black baseball begin earlier than most fans of the sport may realize, it took root in places that might not be expected, either. Steven R. Hoffbeck and Peter Gorton tell the story of legendary southpaw John Donaldson, who pioneered baseball in Minnesota and who would eventually be part of the NNL’s 1920 inaugural season with the Kansas City Monarchs.

Of course, there are also profiles of some of the Negro Leagues’ now-mythic figures: Sol White (by Jay Hurd), Rube Foster (by Larry Lester), and Oscar Charleston. Jeremy Beer contributes his article “Hothead: How the Oscar Charleston Myth Began,” which rebuts the notion that Charleston was a brawler in need of anger management.

Ballparks and venues also get a look, with a major league field and a Negro League field included. James Overmyer’s “Black Baseball at Yankee Stadium” describes the tenant/landlord relationship of Negro Leagues teams with the New York Yankees during the 1930s and ’40s, while Geri Driscoll Strecker’s “The Rise and Fall of Greenlee Field” is a cradle-to-grave biography of the Pittsburgh Crawfords’ stadium.

The final section of the book covers integration and the socio-economics of Black baseball. Leading off is Larry Lester’s masterful “Can You Read, Judge Landis?” which refutes the contention that Judge Kenesaw Mountain Landis was blameless for the persistence of baseball’s segregation. MLB’s official historian, John Thorn, and the late Jules Tygiel weigh in with “Jackie Robinson’s Signing: The Real, Untold Story.” And Japheth Knopp’s “Negro League Baseball, Black Community, and the Socio-Economic Impact of Integration” explores Kansas City as a case study in the effects of integration.

Brian Carroll’s “Early Twentieth Century Heroes: Coverage of Negro League Baseball in the Pittsburgh Courier and the Chicago Defender” studies the cooperation among the African American press, local business communities, and baseball men such as Rube Foster to form the Negro National League, and later, the Eastern Colored League. And Duke Goldman presents an in-depth and meticulously referenced recap of the winter meetings and in-season owners meetings from the formation of a second Negro National League in 1933 through the last gasp of the Negro American League in 1962.