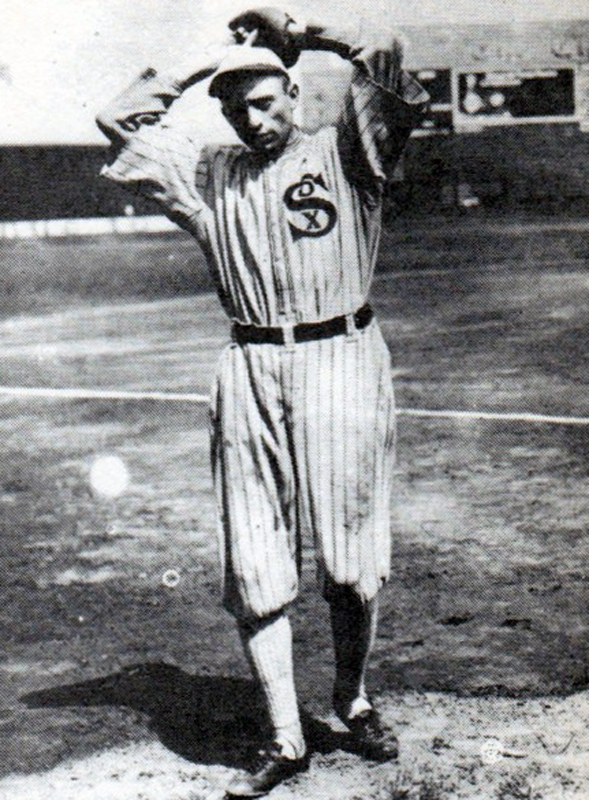 Erskine Mayer had a most interesting background, one that was very different from that of most players of the early 20th century. Mayer’s paternal grandparents were Jews who came from Germany. His great-grandfather (his grandmother’s father) had been a buyer for Otto von Bismarck, the Prussian statesman who unified Germany. He disappeared one day, and it wasn’t until years later that his body was discovered buried in a stable. Both of his grandparents were musicians, a talent they passed on to Erskine’s father, Isaac, who composed an opera written in Hebrew.

That lineage was poles apart from Mayer’s family on his mother’s side. His mother, born Henrietta Frankel, traced her ancestry back to the Mayflower. Her family owned tracts of land in what was then Virginia Territory and today is the state of Kentucky. His maternal grandmother’s brother, James Allen, captained a riverboat that ran from Hannibal, Missouri, to New Orleans. It was from marking twain on Captain Allen’s boat that young Samuel Clemens chose the nom de plume of Mark Twain. Mayer’s maternal grandmother had converted to Judaism, and both his parents were raised in the Jewish religion.

Mayer’s father continued the family’s musical tradition,1 working as both a concert pianist and music teacher in Ohio and then Georgia, where Erskine (his birth name was Jacob Erskine) was born in Atlanta on January 16, 1889. Evidently not concerned about his son’s injuring his hands, Mayer’s father, who enjoyed baseball, would often play catch with Erskine and his two brothers. One of the brothers, Sam, played in 11 games for the 1915 Washington Senators and for 16 seasons in the minors.

Mayer graduated from the Georgia Military Academy (today’s Woodward Academy) and entered Georgia Tech in the fall of 1907. Though Mayer made the varsity baseball squad the following spring, Tech’s Coach John Heisman (of Heisman Trophy fame) displayed a reluctance to use Mayer early in the season, putting him in only four games as Tech stumbled to a 5-8 start. Mayer started four of Tech’s final eight games, posting a 3-1 mark and finishing 5-2 on Tech’s first losing team since 1903. In Mayer’s second campaign at Tech, he posted a 7-3 mark in 10 starts on a team that finished 13-8.

In February 1910, Mayer was dismissed for poor grades.2 A few days later the Atlanta Constitution reported that he had signed a contract with the Atlanta Crackers, whose team president, John Heisman, coincidentally served as Tech’s baseball coach.3 Mayer’s professional debut came on April 24 in Memphis, a game in which he was freely hit, surrendering three triples, a home run, and a double among 13 hits while losing 7-2.

Ultimately, after he ran his record to 4-4, the Crackers sent Mayer to the Fayetteville Highlanders in the Class D Eastern Carolina League. In reporting on his being sent down, the Atlanta Constitution wrote, “Mayer is considered a good prospect, but not fast enough for the Southern League.”4 Mayer would post a 15-2 mark, and his .882 winning percentage helped Fayetteville win the pennant.

Mayer starred in the Virginia League, posting a 12-2 mark by late June, when the Atlanta papers reported that he would be returning to Atlanta.5 Within a couple of days it was apparent that Portsmouth had balked at returning its star pitcher to Atlanta; the Atlanta Constitution reported the matter was before the National Commission.6 Three days later Secretary John Farrell of the National Commission advised Atlanta’s management that Portsmouth had been told to pay for the players taken from the Crackers or forfeit the franchise. Despite these warnings, Mayer did not return to Atlanta and in early August reports surfaced that he would join the team after it finished its road swing around the league.7

A week later Atlanta papers reported that the Philadelphia Phillies had outbid the Pirates for Mayer, paying Atlanta $2,500.8 Mayer reported to the Phillies after the Virginia League season ended, having posted a 24-8-1 mark with eight shutouts and 18 one-run games, according to the Atlanta Journa,l9 for a Portsmouth team that posted a .508 winning percentage. His final Portsmouth record ended at 26-9.

He debuted for the Philadelphia Phillies on September 4, 1912, pitching two scoreless innings in a 5-2 loss to the pennant-bound New York Giants. Philadelphia Inquirer reporter Edgar Wolfe, who wrote under the pseudonym Jim Nasium, had this to say about Mayer’s debut: “He looked more like regular pitching material than anything we have lamped [seen] breaking in for some time.”10

Mayer appeared in seven games over the final month of the 1912 season, making one start and losing his only decision. In 1913, his first full year as a major leaguer, he had a 9-9 record as the Phillies, behind the pitching of Tom Seaton and Pete Alexander, finished second. Mayer set a major-league record (since broken) on August 18 of that season, a record he surely would have preferred not to have. Called in to face the Chicago Cubs in the ninth inning of a 4-4 game, Mayer retired the first batter he faced and then yielded a record-breaking nine consecutive hits.

Philadelphia’s second-place finish in 1913 was its best showing since 1901, but in 1914 the ballclub was victimized by the formation of the Federal League. The Phillies lost Seaton, a 27-game winner, and their double-play combination of Mickey Doolan and Otto Knabe to the new league and dropped all the way to sixth place. Alexander and Mayer accounted for 48 of the team’s 74 victories. Alexander won 27, while Mayer went 21-19, with an excellent 2.58 ERA. The highlight of his season came in the second game of a doubleheader against St. Louis on July 27. Mayer defeated the Cardinals, 2-0, allowing just two hits,. Earlier in the season, on June 9 at Baker Bowl, Mayer gave up a ninth-inning double to Honus Wagner, the great Pittsburgh star’s 3,000th hit.

After the 1914 season, owner William Baker changed managers, replacing Red Dooin with Pat Moran. He also executed a series of trades, including one that sent the great Sherry Magee to the Boston Braves and another that sent standout third baseman Hans Lobert to the Giants. Yet despite the loss of these two stars, the 1915 Phillies, led by the pitching of Alexander and Mayer, the slugging of Gavy Cravath, and the fine all-around play of rookie shortstop Dave Bancroft, won their first-ever National League pennant.

Mayer had his best season as a big leaguer in 1915. He again won 21 games (21-15), and lowered his ERA to 2.36. Always a fine hitter, he batted .239 (in a season when the Philadelphia team as a whole had a batting average of .247), with four extra-base hits (one a homer). But once again Mayer was overshadowed by his pitching partner and roommate, Alexander, who led the league in wins (31-10), ERA (1.22), and several other pitching categories. “Every time I pitched well, Alexander topped me,” Mayer later remembered.11

Philadelphia won the coin toss with the American League champions, the Boston Red Sox, and chose to play the first two games of the World Series at home. Alexander got the Phillies off to a great start, defeating the Red Sox, 3-1, in the opener. In Game Two Mayer allowed Boston just two runs, but lost when Rube Foster held the Phillies to three hits and a single run. The Red Sox got the game-winner in the ninth inning on a two-out single by Foster.

Although the pitching on both sides was outstanding, the game is probably best remembered as the first World Series game to host the president of the United States. Woodrow Wilson and his fiancé and future wife, Edith Bolling Galt, were among the spectators at Philadelphia’s Baker Bowl on October 9, and Wilson even threw out the ceremonial first ball.

Boston won the next three games, 2-1, 2-1 (beating Alexander), and 5-4 (all four of their wins were by one run) to take the Series in five games. Down three games to one, Moran planned to give Alexander a third start in Game Five, but Alex’s arm was hurting, so he turned to Mayer. Once again facing Foster, Mayer allowed two first-inning runs and left after 2? innings, but was not charged with the defeat.

Exactly one month later, on August 1, Mayer was a major participant in one of the greatest pitching duels in big-league history. Pitching against the Braves at Boston, he and Braves starter Art Nehf pitched scoreless baseball for 15 innings. Wilbur Cooper finally relieved Mayer with one out in the 16th inning, and Cooper got the win when the Pirates pushed across two runs against Nehf in the 21st inning.

In all, Mayer won nine games for Pittsburgh while losing only three to finish the 1918 season with a 16-7 record, 18 complete games, and an ERA of 2.65. He was 5-3 for the Pirates in 1919 when on August 6 they put him on waivers. No team in the National League claimed him, but the Chicago White Sox picked Mayer up for the $2,500 waiver price. The White Sox were in the thick of the American League pennant race and were glad to add an experienced pitcher. Mayer was not much help to the White Sox. He appeared in six games, two of which were starts, and had a 1-3 record and an 8.37 earned-run average.

The White Sox won the pennant anyway, but lost the best-of-nine World Series in eight games to Cincinnati. Mayer pitched one inning in a mop-up role in Game Five, allowing one unearned run. He was totally unaware that several of his teammates had accepted money in a conspiracy to lose the Series. It was his final big-league appearance. He ended his career with 91 wins, 70 losses, and an excellent 2.96 earned-run average.

Mayer’s revulsion when the details of the Black Sox Scandal surfaced probably contributed to his decision to retire. “Erk loved baseball for the true sport it afforded,” Mayer’s wife, Grace, said, “and he felt if a game had been thrown he was through with baseball.”12 (He did return briefly in 1923 as an umpire in the South Georgia League.)

At 6 feet tall and weighing less than 170 pounds, Mayer was not overpowering on the mound. He had good speed, but relied more on good control and an excellent side-arm curveball, a pitch that led Brooklyn manager Wilbert Robinson to call Mayer “Eelskine” because the pitch was “so slippery.” It was also Robinson who said that you could upset the Atlanta-born Mayer by whistling “Marching Through Georgia” or riding him about the South.13

Mayer was operating a cigar store in downtown Los Angeles when he died in that city of a heart attack on March 10, 1957. He was buried in Forest Lawn Memorial Park Cemetery in nearby Glendale.