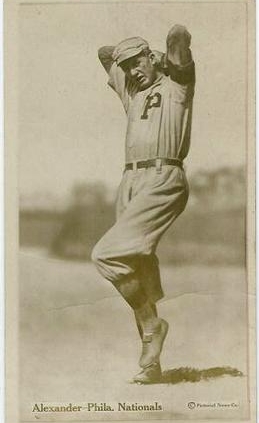 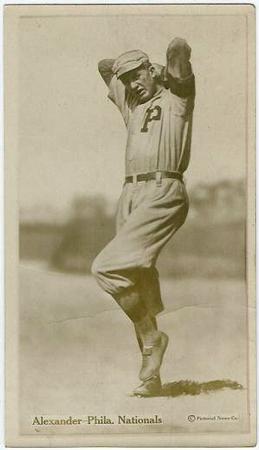 The same two cities squared off in the 1915 World Series as had in 1914, but the teams were different. In 1914 Boston’s National League team — the Braves (the so-called “Miracle Braves”) — had swept the Series in four games from the Philadelphia Athletics of the American League.1

In 1915 the Boston Red Sox took on the Philadelphia Phillies.

In 1915 Philadelphia’s team won the first game of the World Series, but then Boston reeled off four wins in a row and came out on top.

The 1914 Phillies finished in sixth place in the National League, 20½ games behind the Braves. The Red Sox took second place that season but were 8½ games behind the Athletics. In 1915 the Phillies (90-62) beat the second-place Braves by seven games while the Red Sox (101-50) were 2½ games ahead of the Detroit Tigers.3

There was never any doubt whom the Phillies would start in Game One. Pat Moran went with his ace, Pete Alexander. Grover Cleveland “Pete” Alexander, Philadelphia’s 28-year-old right-hander and future Hall of Famer, had topped the majors with 31 wins and a 1.22 earned-run average.4

The first three Boston batters against Alexander in the top of the first were productive. Right fielder Harry Hooper singled to center field. Shortstop Everett Scott sacrificed to get Hooper to second base, bunting back to Alexander. Tris Speaker drew a base on balls to put two on with one out.

But Alexander then got first baseman Dick Hoblitzell to ground to shortstop, erasing Speaker in a force play at second base while Hooper advanced to third. The threat ended when Alexander picked off Hoblitzell at first base. The sporting editor of the Philadelphia Inquirer saw that as a play that gave “Alex” and the Phils early confidence.5

Red Sox manager Bill Carrigan also tabbed his best pitcher to start — Ernie Shore. Both Shore and Rube Foster had identical 19-8 records, but Shore’s 1.64 ERA was better than Foster’s 2.11. Shore kept the ball in the infield in the first — inducing foul popups to his catcher and first baseman, with a popup to second base in between.

Once again the Red Sox led off with a single in the second inning, with Duffy Lewis singling to left. Once again, there was a sacrifice bunt back to Alexander, this time by Larry Gardner. Boston second baseman Jack Barry hit a ball to Alexander, too, but the pitcher had time to field it and throw out the lead runner at third base. He then stuck out catcher Hick Cady.

Shore walked two batters in the second inning, but with one out Fred Luderus was caught stealing and Shore then struck out Bert Niehoff.

Each team got a single in the third inning — Scott for Boston and Alexander for Philadelphia — but no more.

In the top of the fourth, Gardner singled with two outs, but Barry flied out to shallow right.

The Phillies scored the first run of the game in the bottom of the fourth. Center fielder Dode Paskert led off with a Texas Leaguer just over Hoblitzell’s reach, landing in shallow right field. He was successfully sacrificed to second by Gavvy Cravath. When Luderus grounded out, second to first, Paskert took third base. He scored when left fielder Possum Whitted hit a slow groundball to second base and was called safe on a very close play. It was 1-0, Phillies.

Ernie Shore singled in the top of the fifth. Each pitcher now had a base hit off his counterpart. Shore went nowhere after Hooper popped up and Scott grounded out, forcing Shore at second base for the third out.

Third baseman Milt Stock reached in the bottom of the fifth on Shore’s error on another high-bounding ball, but he was the lone Phil on base. Shore retired the side in order in the sixth and in the seventh.

The game entered the eighth inning with the score still 1-0 in favor of the Phillies.

Alexander got Scott to pop up to shortstop Dave Bancroft. Tris Speaker walked. Hoblitzell grounded to third base and, after a brief fumble, Stock’s only play was to throw to first. “Had Stock handled the ball cleanly,” wrote the Inquirer’s Jim Nasium, “the Red Sox would have been shut out.”6

Instead, Speaker was on second with two outs. Duffy Lewis swung at Alexander’s first pitch and tied the game with a single to left field; on the throw home Lewis got himself into scoring position, running to second base. Gardner got wood on the ball, but Paskert in deep left-center “yanked down the ball while on a dead run”7 for the third out. The game was tied, 1-1.

Philadelphia answered in the bottom of the eighth. After getting Alexander to ground out, second to first, to start the inning, Shore faltered. He walked Stock. Bancroft hit an infield single to second base; Barry made a “phenomenal one-handed stop … but found no one at second base to take the ball.”8 Both runners were safe. Then Shore issued his fourth walk of the game, loading the bases with still just one out.

Cravath grounded out, Scott to Hoblitzell, but Stock scored on the play and gave Philadelphia a 2-1 lead. The bases were still loaded. Luderus hit the ball right back to Shore, but Shore slipped on a wet spot and Luderus reached on an infield single. Bancroft scored. Cady gunned down Luderus trying to steal second base. Inning over, but it was 3-1 and all Alexander had to do was get three outs for the Phillies to win Game One.

He struck out Jack Barry. Olaf Henriksen pinch-hit for Cady and got on base thanks to an error on a groundball to first base, with the ball glancing off Luderus.

Babe Ruth stepped into the batter’s box for Boston, pinch-hitting for Shore. A home run would tie the game — and Ruth was the home-run leader on the Red Sox. That wasn’t saying a lot — Ruth had a total of four career home runs at this point, all in this, his sophomore season. He hit another 725 home runs in the years that followed, 15 of those in World Series play. But this time Ruth grounded out to first base, Luderus making the play unassisted.9 Henriksen took second base.

Harry Hooper popped up to first base to end the game. The Phillies had won Game One, 3-1.

Gavvy Cravath was the real slugger coming into the World Series. For the third year in a row, he had led the major leagues in home runs, hitting 24 in 1915. His 115 RBIs had led both leagues, and the Federal League, too. His groundout in the eighth inning drove in the winning run in Game One, but it proved to be the only run he drove in during all five games of the 1915 Series.

Paskert’s single to right field in the fourth inning was the only one of Philadelphia’s five base hits that left the infield.

One wouldn’t expect a Game One loss to convince anyone that the Red Sox were the better team, but that’s exactly what Boston partisans concluded. Sportswriter Tim Murnane led his game summary by saying, “the Boston men are tonight greater favorites than before the series started.”10 Red Sox batters had hit Alexander. Only in the ninth inning did “Alexander the Great” not surrender a single; one Red Sox batter or another had singled in every one of the first eight innings. They had left one man on base in every single inning, but Alexander pitched his best ball with men on base.

A subhead for Murnane’s article read “Five Fluky Hits Beat Eight Solid Ones by Boston.”11 J.C. O’Leary’s Globe column was headlined “Red Sox Show Winning Form Though Beaten.”12 Tris Speaker said of Alexander, “He did not look so tough to us as we expected.”13

Even the Philadelphia Inquirer’s Jim Nasium felt the Phils had been fortunate, as indicated by the subhead on his article: “Breaks Enable Phils to Beat Red Sox Team.”14 They won, he wrote, not because they played better, but because of the “fickle goddess of the pastime.”

2 The story behind the two teams playing in each other’s ballparks is told in more detail in Bill Nowlin and Bob Brady, eds., Braves Field: Memorable Moments at Boston’s Lost Diamond (Phoenix: SABR, 2015).

4 Alexander’s 1915 season was the first of three consecutive seasons in which he won 30 or more games for the Phillies.

9 The 20-year-old Ruth was primarily a pitcher in 1915. He had a record of 18-8 with a 2.44 earned-run average and had pitched 16 complete games, but this plate appearance was the only time he played in the 1915 World Series, either as a pitcher or a batter. When batting, he’d hit .315 in 92 at-bats and walked nine times for a .376 on-base percentage. Manager Carrigan still used him just this one time in the five games of the World Series.