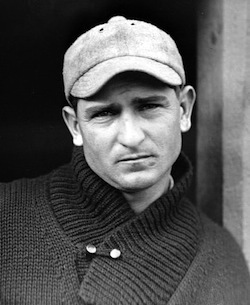 After dropping Game One of the 1915 World Series, 3-1, the Red Sox came back with a narrow 2-1 win in the second game. Manager Bill Carrigan had said before the Series, “Outside of Pete] Alexander, I do not think any of the Philly pitchers compares with my men.”1 Alexander had won that first game.

Nationally syndicated columnist Hugh Fullerton wrote on the eve of the first game, “Boston’s Red Sox are the better baseball team. … The figures show them superior to the Phillies in every department of the game as a team.”2 The breaks went the Phillies’ way in the first game. How would the remaining games of the Series play out?

Erskine Mayer was the starting pitcher for the host team, playing at Baker Bowl. President Woodrow Wilson — the first president of the United States ever to attend a World Series game — threw out a ceremonial first pitch. After the actual first pitch of the game (a ball to Harry Hooper), Phillies catcher Ed Burns gave the ball to home-plate umpire Cy Rigler, who came over to the box near the Red Sox dugout and presented it to Wilson.3

Mayer won 21 games in both 1914 and 1915, with a 21-15 record and ERA of 2.36 in the latter year. All three of his starting losses in September 1915 had come during games in which the Phillies had been shut out. He often worked with an underhand delivery.

Leadoff batter Hooper drew a base on balls. Everett Scott predictably tried to bunt him to second, but popped up to first baseman Fred Luderus. Tris Speaker singled into right field and Hooper scooted all the way around to third base.

Attempting to get two men into scoring position for Dick Hoblitzell, the two baserunners tried to pull off a delayed double steal, but it almost turned into a double killing. Speaker was cut down at second base, catcher Burns throwing to Bert Niehoff. The return throw to the plate was in time to get Hooper for a double play — but Burns dropped the ball (some game stories called it an “excusable” error) and let it squirt away from him.4 Hooper scored, though only after missing the bag initially and having to crawl back quickly before Burns recovered the ball. And then “Hobby” hit a single to center. Theft apparently still on the mind, he tried to steal second but was thrown out. Still, Boston had a 1-0 lead.

George “Rube” Foster, pitching for the Red Sox, was the star of the day. The third-year righty had been 19-8 (2.11 ERA) during the regular season, with five shutouts. He struck out five of the first nine Phillies batters he faced and retired the other four on infield grounders. Only in the fourth inning did a couple of routine fly balls give Red Sox outfielders some action. Foster was perfect through four.

In the fifth, Foster tried to aid his own cause with a two-out double “up against the right-field wall”5 — the first extra-base hit in the 1915 World Series. Hooper walked, but Scott flied out to end the inning. Then Foster lost his lead. He gave up back-to-back doubles — Gavvy Cravath hit one down the left-field line and Luderus off the fence in right-center — to lead off the bottom of the fifth. Although Rube settled down to retire the next three hitters in order, the Phillies had tied the score, 1-1.

Boston bats remained anemic in the sixth, producing a couple of weak popups and a strikeout. Dave Bancroft singled in the sixth for the Phillies. Aside from the two hits in the fifth inning, he was the only Phil to reach first base. In the seventh the Red Sox tapped out three singles — one by second baseman Jack Barry, one by Foster, and one in the infield by Hooper, which loaded the bases. Olaf Henriksen pinch-hit for Everett Scott but hit a towering popup to first base. No runs scored.

Through eight innings, Mayer and Foster continued to prevail. The score remained tied, 1-1.

In the top of the ninth, Larry Gardner led off with a single to left field for his second hit of the ballgame. Jack Barry flied out to Dode Paskert in center field. Hal Janvrin, who’d entered the game to play shortstop after Henriksen pinch-hit for Scott, grounded weakly back to Mayer, who had but one play; he nipped Janvrin at first by perhaps an inch.6 Gardner took second base.

Then Foster singled solidly to center field, a “sizzling smash,” the Boston pitcher’s third hit of the game.7 Paskert grabbed the ball quickly and made a good throw to the plate, but it was wide of the mark as Gardner scored the go-ahead run. Foster took second base on the throw, but Hooper struck out to end the inning. Then it was up to Foster to see if he could hold the 2-1 lead he’d just given himself.

He did hold the lead — but it took two remarkable outfield catches to save the game. Leading off the bottom of the ninth, Milt Stock almost tied it. Stock hit the ball hard and sent it “on a screaming line to left, well to the right of Lewis and headed for the bleachers; but Lewis was on his toes and took the fast-traveling ball well over his head and to one side.”8 One out.

On a 3-and-2 count, Bancroft took a called third strike, his second strikeout of the game, for the second out. Paskert then hit a long fly ball to deep center field. This time, it was Speaker’s turn to make a sensational catch to save the game, with his back against the low fence, snaring it just one or two feet from where it would have fallen into the crowd.9 With just a moment to set himself, he leapt to rob Paskert of a game-tying homer.

About 350 of Boston’s loyal Royal Rooters had traveled to Philadelphia for the first two games, bringing their band. After Speaker’s catch secured the victory, they spilled onto the field and paraded around as the band played “Tessie.”10 With the Series now tied 1-1, the Rooters and band would be traveling back to Boston for the next two games.

In lifting the Red Sox to a 2-1 win, Foster didn’t walk a batter or allow a baserunner after Bancroft’s single in the sixth. He struck out eight, and Mayer seven, but Mayer had allowed 10 hits and Foster only three — matching the number of hits he’d made himself, one of which drove in the winning run. Grantland Rice wrote, “Only Mayer’s coolness and his support kept the game a contest.”11 Fullerton believed that the Boston bats had shown a “lamentable lack of punch [and] should have won by at least five runs.”12

It was a well-played game, though. The solid defensive efforts of Stock and Bancroft in particular helped Philadelphia keep the score as close as it was. A loss is a loss, however, and the Phillies were forced to rely on “Alexander the Great” to try to win Game Three and regain their edge.

Noting how much more productive Boston had been at the plate, albeit without demonstrating much in the way of runs, Grantland Rice concluded that the Red Sox had reasserted themselves as favorites and that Boston boosters “can’t see where the Phillies are going to make enough runs to win, and they can’t see how anyone except Alexander can stop Boston batting.” It would be, he wrote, “Alexander now or nothing.”13

Philadelphia manager Pat Moran had warmed up both George Chalmers and Mayer before the game, but went with Mayer.14

Hugh Fullerton wrote: “The odd part of the game was the lamentable lack of punch in the attack of the Red Sox. They are not playing the game as they do during the regular season and during most of the game today they seemed to be puzzled and outguessed by Mayer.”15

October 10 was a Sunday, and there was no Sunday baseball allowed in either Boston or Philadelphia. With the Series tied, the teams prepared to play Game Three on Monday the 11th at Braves Field, the ballpark the Red Sox borrowed from the Braves to accommodate larger crowds than Fenway Park could hold. The Red Sox were ready to start Dutch Leonard; the Phils were going to turn to their true ace, Game One winner Alexander.

14 After Alexander started the third game, Chalmers got the start in Game Four.