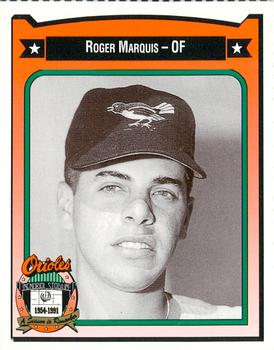 On the last day of the 1955 regular season, 18-year-old Roger Marquis played one inning in right field and batted once for the seventh-place Baltimore Orioles. That was his only major league appearance, and he was out of professional baseball altogether by age 21.

Roger Julian Marquis was born on April 5, 1937, in Holyoke, Massachusetts. Though most public records spell his middle name “Julian,” both his father’s first name and Roger’s middle name were spelled the French way: Julien. The Massachusetts birth index records his full name as Joseph Julien Roger Marquis. Both of his parents, Julien and Lea (Talbot) Marquis, were French-speaking immigrants from Quebec. Holyoke received a large number of French-Canadians in the 19th and 20th centuries, as did various other Massachusetts mill towns. Julien described himself as a chauffeur in the coal business in the 1930 U.S. Census. By 1940, he owned the Marquis Coal & Oil Company. Roger was the youngest of his children, following a brother, Normand, and sister Lillian.

Roger played baseball and basketball at Holyoke High School. He was dubbed “Noonie” by his teammates, according to a 1955 Baltimore Sun article.1 Later, the book Baseball Players of the 1950s attributed the derivation of the nickname to Roger’s older brother.2 As a 16-year-old sophomore, the left-handed thrower and swinger blossomed into a pitching ace and led the Knights to the Valley League title. “[Marquis] didn’t figure in coach Eddie Moriarty’s plans until well after the season started. However, he came so fast that he won the No. 1 rating and received the majority of tough assignments,” reported the Berkshire Eagle. “Observers say he isn’t nearly as fast as Larry Bossidy but has a good curve.”3

Unlike Marquis, Bossidy, a rival at Pittsfield High, never turned pro — despite having a 95-mph fastball which prompted a Detroit Tigers scout to show up at his house offering a $40,000 contract. However, Bossidy’s mother refused to open the door, insisting that he’d attend college first.4 After starring at Colgate, he later became the CEO of the General Electric Credit Corporation and AlliedSignal.

On June 6, 1953, Marquis beat Bossidy’s previously undefeated Pittsfield High team for the Western Massachusetts championship at Holyoke’s Mackenzie Stadium, ending the contest with his 10th strikeout.5 One week later, in front of 2,000 fans in Milford, Marquis pitched a seven-hitter in the state championship game to finish his season with an 8-0 record.6 In July, he led his Fairview club to the zone title in the Hampden County League American Legion championship with a 12-strikeout four-hitter. The lefty had played right field the previous day.7

During Marquis’s junior year, a Berkshire Eagle reporter contrasted him with another Pittsfield hurler, Bruce Robarge. “Robarge is probably the best interscholastic pitcher in Western Massachusetts,” read the article. “This is said with no desire to belittle Roger Marquis, the good-sized boy [6-foot, 190 pounds]. He’s good, but he doesn’t have Robarge’s all-around class.”8 By the end of 1954, Robarge was pitching his first of four seasons in Class D in the Boston Red Sox farm system.

Marquis turned pro after graduating from Holyoke High in 1955 with an overall 21-5 record. In 227 innings, he struck out 263, including 19 in one especially dominant outing against archrival Chicopee.9 Though he walked 105 batters, he surrendered only 136 hits.10 In addition to pitching, Marquis batted .500 as a senior. Former Phillies outfielder Stan Benjamin, the coach at Greenfield High, raved, “This boy has everything needed to become a big leaguer.”11

On September 2, Marquis signed with the Orioles and threw batting practice before that evening’s series opener against the Red Sox at Memorial Stadium. He named former minor-league catcher Joe Cusick as the signing scout on a questionnaire that he filled out a few weeks later.12 Baltimore manager Paul Richards announced that his club had outbid both the Yankees and Red Sox for the 18-year-old’s services.13 Though the undisclosed terms of Marquis’s deal did not make him a “bonus baby,” which would have forced him to remain in the majors for two years, the North Adams Transcript reported that he’d rejected the chance to become one.14 His former Holyoke teammate, Frank Leja, had spent 1954 and 1955 with the Yankees after signing a bonus contract, but batted only seven times with one hit during those two years. (In 1962, Leja reemerged with the Angels and went hitless in 16 at bats.)

It was not initially clear how Baltimore intended to deploy Marquis. He described himself as a pitcher/first baseman/outfielder on a publicity questionnaire that he filled out that year.15 The Sporting News report on his signing identified him as a “pitcher/slugger.”16 On September 4, the Boston Globe reported, “Roger Marquis, the Holyoke High product, had Tommy Gastall of Boston University as his warmup catcher as he prepared to pitch batting practice tonight.” (A little over a year later, Gastall died as his single-engine plane crashed in Chesapeake Bay.) The item went on to observe: “Marquis threw loosely for 10 minutes and had good control. . . Manager Richards isn’t planning to pitch him in any league competition this season unless the Orioles need someone to finish up a one-sided game.”17

Indeed, no opportunities arose that Richards deemed suitable for Marquis to take the mound. However, on September 25, 1955 — the last day of the Orioles’ 1955 season, he put Marquis in right field for the eighth inning of a 5-4 victory over the Senators at Griffith Stadium in Washington. Marquis replaced Angelo Dagres, another Cusick signee from New England, who’d debuted two weeks earlier. No balls were hit in Marquis’s direction. His turn in the order came up to lead off the top of the ninth against Bob Chakales, and he grounded out to shortstop José Valdivielso. He was then replaced by Cal Abrams in right field for the final three outs. That was the beginning and end of Marquis’s big league career.

Listed as a pitcher, Marquis was invited to early spring training in Scottsdale, Arizona, in 1956.18 The Sporting News noted that he had been classified 1-A by the Holyoke draft board, but probably would not be called into military service that year.19 The 19-year-old was farmed out in the first cut and spent his first full season as a professional with the Thomson (Georgia) Orioles in the Class D Georgia State League. In six pitching appearances, his record was 2-2, but he soon shifted to first base. He believed he would hit more effectively playing an everyday position, and led the club with 384 at bats in 116 games.20 One of his highlights was a four-RBI performance in teammate Ed Gunning’s no-hit victory over the Hazlehurst-Baxley Tigers in June.21 Overall, Marquis batted only .227 with four home runs, but he ranked third in total bases on a weak-hitting Thomson team. His modest .315 slugging percentage matched the overall club mark.

Marquis missed the beginning of 1957 with a leg infection.22 Nearly a half-century later, his widow told the Baltimore Sun that her husband had been seriously injured by a ball hit off his shin. As described by the paper, “The injury originally was ignored, but turned serious and needed significant rehabilitation.”23 Finally, on May 15, Marquis joined the Paris (Texas) Orioles in the Class D Sooner State League.24 Four days later, he had two hits, two RBIs, scored a run and stole a base against the Ponca City Cubs.25 On June 12 however, he was released outright after appearing in only 13 games.26 In July, he joined the Holyoke Knights of Columbus team in the semipro Tri-County League.27 His brother Norm was also in the lineup when the club won the annual Labor Day tournament that was played at Mackenzie Stadium.28 Marquis appeared in the spring training transactions column in 1958, reassigned to Baltimore’s minor league camp in Thomasville, Georgia, in early April. Then he vanished from professional baseball forever.29

City directories indicate that Marquis returned to Holyoke and drove trucks for a living for a few years. By 1964, he had joined his brother working for his father’s oil company and married the former Alice Cook. They had two sons, Roger and Mark. Roger, Jr. played baseball at George Washington University on a full scholarship. Marquis eventually became the co-owner of Marquis Oil. He reportedly sold the business in the mid-1980s and retired.30

After a brief illness, Roger Marquis died unexpectedly on July 19, 2004, in Holyoke. He was 67. He is buried at Notre Dame Cemetery in South Hadley, Massachusetts. Two years later, the Baltimore Sun contacted his widow for a story on Orioles who had appeared in only one game. “He said that’s all he ever prayed for and wished for and he got what he wanted,” Alice Marquis told the reporter. “I said, ‘You should have asked for more.’ But he said his prayers were answered. He played one game in the major leagues.”31

This biography was reviewed by Rory Costello and Norman Macht and fact-checked by Evan Katz.

In addition to the sources cited in the Notes, the author also consulted www.ancestry.com, www.baseball-reference.com, and the U.S. Census from 1930 and 1940.