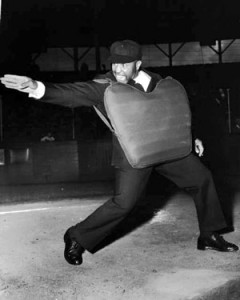 Opening Day on April 11, 1966, at D.C. Stadium in Washington figured to be the most important day in umpire Emmett Ashford’s career, yet he came close to missing it. The hometown crowd of 44,168 got a bonus when they attended the Washington Senators’ season opener against the Cleveland Indians. They witnessed history when Ashford became the first umpire to break the major leagues’ color barrier. The milestone came two decades after Jackie Robinson broke the barrier against Black players in the National and American Leagues.

Ashford had also been the first Black umpire in Organized Baseball, in 1951. He started out in a Class C league and progressed to the Triple-A Pacific Coast League, where he spent 11 seasons.

Reaching the majors had always been a goal of Ashford’s. He patiently paid his dues with 15 years in the lower levels. He eventually developed the confidence of Pacific Coast League President Dewey Soriano, who put him in charge of the umpires and often called on Ashford to represent him at PCL functions. Ashford said in 1964, “I can’t complain about the treatment I’ve received in the minors.” He added, “It seems like I’ve been on the threshold for a couple years now. I’m just waiting for a chance as a major-league ump. When and if it will come, I do not know. Nobody has told me a thing. But I’ve made a lot of friends in the minors, I think I’ve proved that I can do the job, and I want the opportunity in the worst way.”1 Two years later, he received the opportunity with American League President Joe Cronin’s endorsement.

He had already acquired a reputation as an entertainer prior to his ascension to the big leagues. He was a high-energy person with a high-pitched voice that manifested itself on the diamond by his flamboyant calling of strikes, sprinting to his position between innings, and running backward with players when they had to return to base. His reputation was enhanced by the practice of pressing his suits and polishing his shoes before each game. He was known for wearing sparkling cufflinks.

The Sporting News observed about Ashford, “For the first time in the grand old American game, baseball fans may buy a ticket to watch an umpire perform.”2 When the question about his penchant for showmanship came up, he answered, “Look, I just love umpiring. I think it’s the greatest thing in the world. I can’t do anything halfway. I guess I’m just so full of enthusiasm that it comes out of me that way.”3

Pregame activities at D.C. Stadium featured the usual pomp and circumstance associated with the president throwing out the ceremonial first pitch on Opening Day. Except this year, Vice President Hubert Humphrey did the honors, subbing for President Lyndon Johnson. Humphrey threw three “first balls” into the assembly of Senators players, snagged by Jim Hannan, Ken McMullen, and Joe Cunningham.4

The Senators were starting their sixth season after the “old” Senators picked up and transferred to Minneapolis after the 1960 season to become the Minnesota Twins. But the new franchise hadn’t fared much better, finishing at or near the bottom of the AL in all five seasons. Senators manager Gil Hodges was starting his fourth season at age 42, but he had yet to post a winning record. The Senators had won 70 games in 1965, the most in their brief history.

The Indians were coming off of a fifth-place finish in 1965. Manager Birdie Tebbetts was in his fourth year in Cleveland. Tebbetts went with 23-year-old left-handed fireballer Sam McDowell, the AL’s leader in ERA, strikeouts, and walks in 1965, as his starting pitcher. McDowell was opposed by lefty Pete Richert, a fellow All-Star a season earlier when he posted a 15-12 record and a 2.60 ERA. It was the first Opening Day start for each hurler.

Ashford took the field as the third-base umpire in his historic debut, but he almost didn’t make it to the game. Upon his arrival at the ballpark, he was stopped under the grandstands by Secret Service agents, who were on hand to provide security for Vice President Humphrey. The agents didn’t believe Ashford was an umpire. They told him, “Listen, there are no Negro umpires in the major leagues.” Ashford responded, “Well, there will be a Negro umpire in the American League, if you will let me into the park.” Ashford was finally admitted after his credentials were validated.”5

Ashford received a warm reception for his momentous debut. Hodges wished him good luck before the game. His fellow umpires gave him a signed baseball to mark the occasion.

The Indians got on the scoreboard first with a run in the top of the third inning. After Richert gave up a walk to leadoff batter Vic Davalillo, Max Alvis’s single advanced Davalillo to third base. Leon Wagner delivered the Indians’ run on a sacrifice fly to center field.

McDowell was at the top of his game from the start. He retired the first nine batters, with six of the outs coming on strikeouts. He gave up his first hit in the top of the fourth, to Fred Valentine. After a sacrifice and a walk, the Indians got out of the inning with a double play.

McDowell loaded the bases with one out in the fifth when he gave up a walk, hit a batter, and yielded a single to Cunningham. But he again avoided giving up a run by striking out the next two batters.

He was in command of the game until the sixth inning, when he gave up a single to McMullen. Frank Howard, the towering giant at 6-feet-7 and 255 pounds, followed with a home run, which carried no more than 20 feet off the ground and hit off the left-field foul-pole screen to give the Senators a 2-1 lead. Ashford’s biggest call of the game occurred on Howard’s home run, although it wasn’t controversial. He signaled the bullet-like home run a fair ball.6

It appeared the Indians were destined for a loss, but their bats came alive in the top of the ninth. With Richert still on the mound, Larry Brown fouled off two full-count pitches and drew a one-out walk. Tebbetts turned to his bench, replacing Brown with pinch-runner Dick Howser and sending up Jim Landis to bat for Del Crandall.

Landis, like Brown, worked the count to 3-and-2, then smashed Richert’s pitch to left-center for a double. Howser, who had missed a hit-and-run sign, had to hold up at third.

Hodges brought in Ron Kline (whose 29 saves in 1965, counted retroactively after the save rule became official in 1969, led the AL) to relieve Richert. Chico Salmon, who pinch-hit for McDowell, was intentionally walked to load the bases, as Hodges decided to go for a double play with the next batter.

But Davalillo spoiled that idea with a two-run single to give the Indians the lead. Alvis followed with a single for his third hit of the day, scoring two more runs as insurance.

With a 5-2 Indians lead in the bottom of the ninth, Sonny Siebert relieved McDowell and retired all three Senators batters he faced to record a save.

McDowell got the win, yielding only four hits, walking four, and striking out nine. Richert took the loss. McDowell went on to have an All-Star season; his 225 strikeouts led the league for the second season in a row. Richert joined McDowell on the All-Star team for the second straight season and finished with a 14-14 record and a career-high 195 strikeouts.

AL President Cronin told Ashford after the game, “Emmitt, today you made history. I’m proud of you.” Ashford expressed his gratitude to Cronin, commenting, “He bucked certain odds to give me the chance. Somebody had to break in and I’m proud it’s me.7

Ashford’s debut in the major leagues was compared to Jackie Robinson’s in 1947. Like Robinson, at times Ashford had to endure the wrath of managers and players while he was breaking into the arbiter’s job in the minors. And some of his more traditional co-workers in the umpiring trade were initially leery of his style of umpiring because they felt it took away from the dignity of the profession.

Ashford officiated the 1967 All-Star Game and the 1970 World Series. He retired after the 1970 season at age 55. He said about his career, “I umpired in the sticks [minors] for 15 years, and when I reached the majors, I didn’t care what they called me just as long as I stayed. I was colorful on the field and some people didn’t like it. They say an umpire should be inconspicuous. But I did what comes naturally. The fans liked me if the letters I received can be used as a yardstick.”8