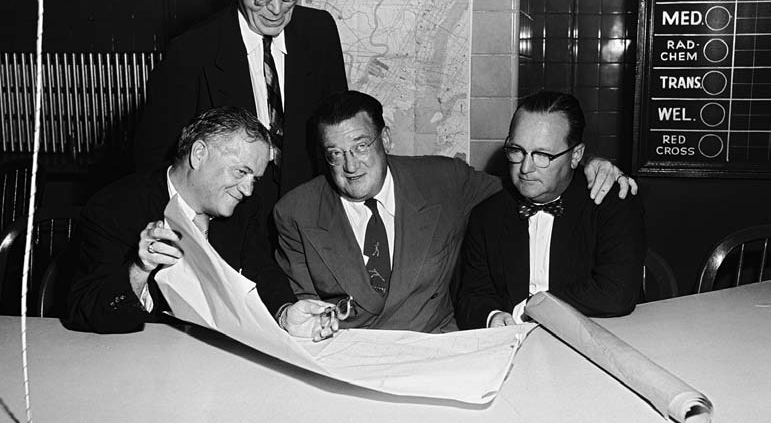 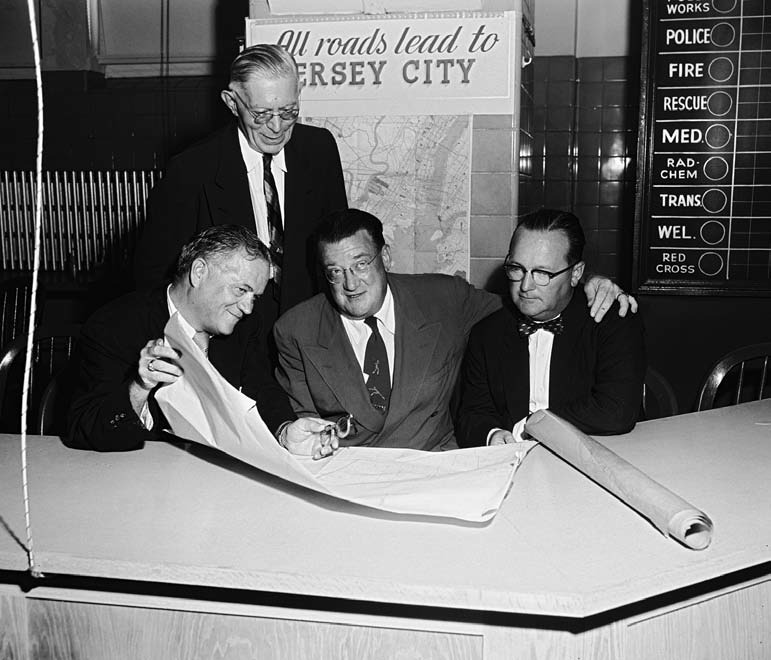 Brooklyn Dodgers owner Walter O’Malley, shown with Jersey City officials, announced that, in 1956 through 1958, the Dodgers would play seven games each season in Jersey City and would have the option to continue the agreement for three years beyond that. (NATIONAL BASEBALL HALL OF FAME LIBRARY)

On April 17, 1956, the Brooklyn Dodgers opened the 1956 season against the Philadelphia Phillies at Ebbets Field in Brooklyn. The Phillies won that game, 8-6. The second game of the series was scheduled two days later at Roosevelt Stadium in Jersey City.

In August 1955 Walter O’Malley, principal owner of the Dodgers, had announced that Brooklyn would play seven home games and one exhibition game in Jersey City in both 1956 and 1957. There was also an option for the next three years.1 The impetus for this agreement was to get New York City to provide land for a new ballpark in Brooklyn. O’Malley was interested in acquiring the property at Flatbush and Atlantic Avenues but it first had to be acquired by the city under Title 1 of the 1949 Fair Housing Act, which allowed the city to condemn private property and use it for a public purpose. Once the property was acquired and sold to O’Malley at a reasonable price, he would build a ballpark.2 The principal stumbling block was Robert Moses, the city’s parks commissioner, who was responsible for implementing Title 1 in New York City. Moses declared that a privately owned baseball team did not serve the public purpose.3

O’Malley felt that scheduling games in Jersey City would incline New York Mayor Robert Wagner and others to put pressure on Moses. The deal he negotiated would also be profitable for the Dodgers. The final agreement with Jersey City was signed in January 1956. The Dodgers would pay a rent of $10,000 to Jersey City but would receive ticket and parking revenue. Given that many fans would be driving, the parking fees were not insignificant.

April 19 was a cold and windy day. The pregame ceremonies showcased Jersey City’s St. Patrick’s Drum and Bugle Corps. The 1955 World Series championship flag was raised. (It would be displayed at both at Roosevelt Stadium and Ebbets Field.)4 The first ball was thrown out by Jersey City mayor Bernard Berry, and Eddie Fisher sang the National Anthem.5

The Dodgers’ starting pitcher, Carl Erskine, retired the Phillies in the first without any scoring. Murry Dickson, pitching for the Phillies, ran into considerable difficulty in the bottom half, not all of his own doing. He began the game by walking Junior Gilliam. Pee Wee Reese followed with a twisting pop fly behind third base. Third baseman Puddin’ Head Jones tried to field the wind-blown popup. The ball dropped for a single with Jones spiking himself in his attempt to catch it.6 Bobby Morgan, a former Dodger, replaced Jones at third base. Duke Snider’s groundout to second moved the runners up. Roy Campanella was intentionally walked, loading the bases. Gil Hodges hit a fly to deep left that Del Ennis had difficulty tracking. It fell in for a three-run double. Jackie Robinson’s single to left field moved Campanella to third base. Carl Furillo hit a fly to second baseman Ted Kazanski in short right. Concerned that Hodges might tag up, Kazanski threw home. On the throw, Robinson made a move to second, drawing a throw from Andy Seminick, the catcher, to shortstop Granny Hamner. Hodges had drifted away from third and Hamner’s throw to Morgan at third nailed him, ending the inning with an unorthodox double play, but the Dodgers led, 3-0.7

Ennis led off the Phillies’ second with a double to center field and took third on Jim Greengrass’s fly to right. Stan Lopata, a catcher playing first base in this game, singled to center and Ennis scored, making the score 3-1. Erskine ended the inning by retiring Morgan and Seminick.

Hamner led off the Phillies’ fourth with a single to right and Ennis reached first on an error by Robinson at third base. Greengrass grounded into a double play and Hamner went to third. With Lopata at the plate, Erskine uncorked a wild pitch, and Hamner scored. Lopata then walked and Morgan singled to right, where Furillo misplayed the hit. Lopata scored the tying run and Morgan got to third base. After Seminick was walked intentionally, pitcher Dickson’s grounder to third ended the inning. Both Phillies runs were unearned.

In the bottom of the fifth, the Dodgers got two runners on base but Dickson got out of the trouble. The Dodgers mounted another serious threat in the bottom of the sixth. Campanella led off with a single to center. Hodges walked. Robinson bunted but Dickson grabbed the ball and threw out Campanella at third. Furillo, after getting new life when third baseman Morgan dropped his foul pop, walked and the bases were loaded with one out. But fortunately for the Phillies, Charlie Neal’s sharp grounder to shortstop resulted in an inning-ending double play.

The seventh and eighth innings were scoreless, and the game entered the ninth tied, 3-3. Greengrass led off the top of the inning by reaching second when Reese fumbled his grounder, then threw wild to first. Erskine retired Lopata and Morgan, intentionally walked Seminick, and struck out Dickson to retire the Phillies. In the Dodgers’ ninth, Furillo, leading off, reached first when left fielder Ennis muffed his liner. Neal attempted to sacrifice but popped to first. Sandy Amoros, batting for Erskine, flied to right field. Gilliam’s single to right sent Furillo to third. The winning run was 90 feet away but Reese grounded to third and Gilliam was forced at second.

Clem Labine replacing Erskine in the 10th, was greeted by Richie Ashburn’s single to right field. After Kazanski struck out, Ashburn stole second and went to third on Campanella’s errant throw. Hamner doubled to left and Ashburn scored, giving the Phillies a 4-3 lead. Labine retired the next two Phillies ending the inning.

Snider led off the bottom of the 10th with a single to center off Dickson. Campanella followed with a line drive over third baseman Morgan’s head that rolled to the left-field stands. Snider scored the tying run and Campanella got to second. (It was Campanella’s 1,000th major-league hit.)8 Mayo Smith, the Phillies manager, called upon Duane Pillette to replace Dickson. Don Zimmer ran for Campanella. Hodges was walked intentionally. Robinson’s sacrifice moved the runners to second and third. An intentional walk to Furillo loaded the bases. Rube Walker batted for Neal and lofted a fly to center that Ashburn caught but was deep enough to allow Zimmer to score the winning run.

The Dodgers had triumphed in their first game in Jersey City before a very disappointing crowd of 12,214, about half the capacity of the ballpark. Clem Labine was the winning pitcher and Dickson took the loss. It was a very sloppy game with the Dodgers making five errors and the Phillies three. The players blamed the soft dirt on the skinned sections of the diamond for some of the errors.9 In their postgame comments, several Dodgers commented about the unfriendly nature of the Roosevelt Stadium fences.10 Robinson, who was jeered, was particularly unhappy about playing in Jersey City.11

The Dodgers would play an additional six games in Jersey City, winning all but the last game, against the Giants. Attendance improved; the games against the Braves and Giants were sellouts.12 The Dodgers won the National League pennant on the last weekend of the season but fell to the New York Yankees in seven games in the World Series. As Jersey City prepared for another season of Dodgers baseball in 1957, rumors swirled about a possible move to Los Angeles, which became a reality after the 1957 season.