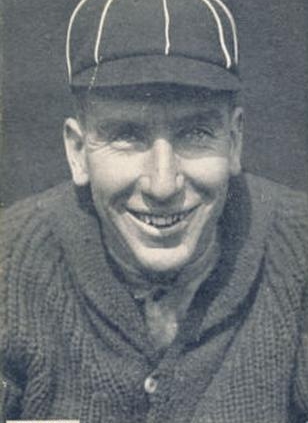 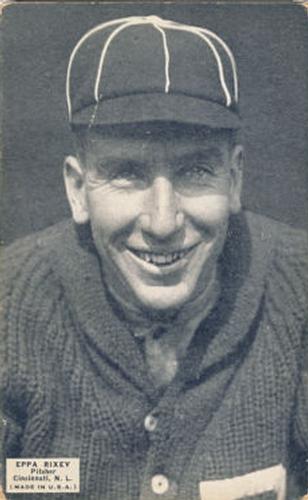 After winning the 1919 World Series, the Cincinnati Reds had slipped to a third-place finish in 1920. One of the moves the team made to bolster its hopes for 1921 was the acquisition of 29-year-old left-hander Eppa Rixey from the Philadelphia Phillies in a November 1920 trade for right-hander Jimmy Ring and right fielder Greasy Neale, both contributing members of the 1919 championship team.

In the long run, the trade was a tremendous success for Cincinnati. Neale played only 22 games for Philadelphia and was released and returned to Cincinnati as a free agent, where he finished his major-league career in 1924 before being later elected to the Pro Football Hall of Fame in Canton, Ohio. Ring’s career extended for another eight seasons, six of them spent in two stints with the Phillies, while compiling a mediocre record of 79-112 with a 4.52 ERA. Rixey pitched for Cincinnati through the 1933 season, completing his Hall of Fame career with a 179-148 record with the Reds, with an ERA of 3.33 over those 13 seasons.

The tall left-hander (6-feet-5) had thrown seven shutout innings in his first start for Cincinnati, on April 15 against the Pittsburgh Pirates. With a 1-0 lead, he ran into trouble in the eighth inning. A single and two bunts loaded the bases with no one out. Rixey got the next two hitters before future Hall of Famer Max Carey cleared the bases with a double, leading the Pirates to a 3-1 victory. The loss dropped Cincinnati into fifth place with a record of 1-2. They never again climbed out of the second division in 1921.

Rixey took the mound on April 20 for his second start for Cincinnati, facing right-handed Ohio native Jesse Haines and the St. Louis Cardinals, in the rubber game of a three-game series at Redland Field. Haines, who joined Rixey in the Hall of Fame, was in his second season with the Cardinals.

After suffering 20 losses in his rookie season (he won 13 games with an ERA of 2.98), Haines had a rugged start in 1921. Starting on Opening Day in Chicago on April 13, he lasted only four innings, allowing all five runs in a 5-2 loss to the Cubs. Two days later, in the Cardinals’ second game of the season, Haines relieved in the seventh inning with the score tied and two runners on base. Facing five hitters, he retired only two of them, and the Cubs scored four runs, including both inherited runners, to complete a decisive six-run inning in their 11-4 come-from-behind victory.

During his 19-season career, Haines pitched in 555 major-league games. All but one of those appearances came with the Cardinals, his team from 1920 to 1937. The exception occurred on July 20, 1918, when Haines relieved for Reds manager Christy Mathewson, replacing Pete Schneider in the fifth inning, with no one out and the bases loaded in Redland Field against the Boston Braves. Despite working out of that jam, and completing the game with five innings on the mound, allowing just one run, Haines was released by the Reds. A 21-5 record (2.11 ERA) with the Kansas City Blues of the American Association in 1919 drew the attention of the Cardinals, who purchased his contract.

A sparse crowd, estimated at 2,000 fans, gathered to watch the 1-3 Cardinals and the 2-4 Reds. Rixey started quickly, retiring the visitors in one-two-three order, as the Cardinals failed to get the ball out of the infield.

Cincinnati wasted no time attacking Haines in the bottom of the first. Dode Paskert, who had been acquired off waivers from the Chicago Cubs in the offseason and was playing center field while future Hall of Famer Edd Roush held out in a salary dispute, led off with a single. After a fly out, third baseman Sam Bohne, who had made his major-league debut five years earlier with these Cardinals in 1916, reached on an error. Cincinnati had purchased Bohne’s contract from Seattle in the offseason and was using him to fill in for another holdout future Hall of Famer, Heinie Groh (famous for his bottle bat).

With runners on the corners, the adventurous Bohne, who would lead the 1921 team in stolen bases (26, and lead the National League with 22 caught stealings), swiped his first base of the season. (He had three stolen bases for the Cardinals in his 14 games in 1916.) Haines then walked left fielder Pat Duncan, who had led all hitters with his eight RBIs in the 1919 World Series.

With the bases loaded, right fielder Rube Bressler, continuing his transformation from a pitcher into a hitter, lined a sacrifice fly into left field, scoring Paskert with the game’s first run. Haines then killed the rally by picking Bohne off second base to end the inning.

Unable to stand prosperity, Rixey allowed the Cardinals three singles and two unearned runs in the top of the second inning, but the Reds rallied in their second at-bat to tie the score on a single by catcher Ivey Wingo, another member of the 1919 championship club, and another former Cardinal (1911-1914).

Things settled down until the fourth inning, when Haines threw Bressler’s bunt into right field, allowing Duncan, who had earlier singled, to score the go-ahead run. The Reds had a 3-2 lead.

Rixey and Haines exchanged zeroes for several innings in a row, but St. Louis tied the game in the seventh. After they loaded the bases, the Cardinals scored the tying run on Cliff Heathcote’s fielder’s choice. Heathcote would later claim fame for being traded between games of a May 30, 1922, doubleheader to the Chicago Cubs for Max Flack.

The stage was set for a wild finish. With two outs in the top of the eighth, future Hall of Famer Rogers Hornsby lined a shot into center field for the Cardinals. Hornsby, who ultimately had seven triples and two home runs in his career against Rixey, refused to settle for three bases this time. He rounded third and headed for home, but Paskert threw him out, keeping the game tied at 3-3.

With two outs in the bottom of the eighth, in a déjà-vu moment, Pat Duncan lined a shot into center field, rounded third, and headed for home. Unlike Hornsby, Duncan had sized up the situation correctly — he crossed the plate safely with an inside-the-park home run. The Reds took the lead, 4-3.

In the top of the ninth, Rixey needed three outs for the win. But shortstop Doc Lavan lined a triple to left field with one man out. Catcher Pickles Dillhoefer then tied the score, 4-4, with a squeeze bunt.

Rookie second baseman, Lew Fonseca, in his first of a dozen major-league seasons (he would lead the American League in batting in 1929, hitting .369 with Cleveland), led off the bottom of the ninth inning with a single.

In contrast to Cincinnati’s earlier games, manager Pat Moran had turned to scientific ball against the Cardinals. A Cincinnati Post writer commented, “It was the first time this year the Reds have played to get their runs one at a time. They laid down four sacrifice bunts against Jess Haines. In their first six games this year the Reds made only two sacrifice bunts.”1 Shortstop Sam Crane “was the boy who put down most of the bunts where they would do the most good. In all he sacrificed three times.”2  Here, Crane’s third sacrifice of the game moved Fonseca into scoring position for Wingo.

In the second inning, Cincinnati had used that exact formula — Fonseca single, Crane sacrifice, and Wingo single — to score their second run of the afternoon. With the game on the line in the ninth, Haines chose not to give Wingo another chance, and, as he had in the fourth inning, walked the Reds catcher, bringing Rixey to the plate.

Hitless in his five at-bats in the season, and a .179 hitter in his eight seasons with the Phillies, Rixey delivered a line drive into center field that fell for a base hit. Fonseca raced home with the game-winning run, as Rixey picked up his first-ever win with Cincinnati, and the 88th of his career, thanks to his own walk-off single.

It was a perfect blend of small ball and home-run ball as Cincinnati “moved to the head of the second division.”3 Pat Duncan became $25 richer as a result of his home run, thanks to a prize offered by a local theater for the first Red to homer in Redland Field in 1921.4

The author relied on several sources, including Baseball-Reference.com, Retrosheet.org, Sabr.org, and Stathead.com.