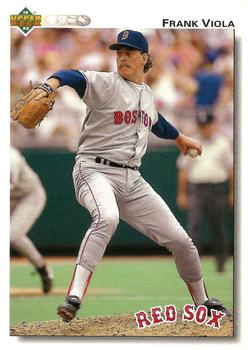 The fans filing into Fenway Park for the April 24, 1992, night game between the Boston Red Sox and Texas Rangers must have been asking themselves: Would Frank “Sweet Music” Viola ever get in tune?

The former American League Cy Young Award winner, 1987 World Series Most Valuable Player, and two-time 20-game winner had signed with the Red Sox in the offseason as a three-year, $13.9 million free agent. His early results fell short of his lofty standards, as he compiled an 0-2 record and a 5.09 ERA in his first three starts. Viola struggled with control and pitch location, and in one start against Baltimore, 11 of the 21 hitters he faced reached base on hits or walks.1

The jury was still out on Boston’s new manager as well. Former Red Sox third baseman Butch Hobson had been named skipper the previous October, replacing Joe Morgan. Morgan led Boston to two American League East championships in 1988 and 1990 but stalled out in the playoffs each time and was considered by many to have lost his players’ respect.2

Hobson had managed Red Sox farm teams in New Britain, Connecticut, and Pawtucket, Rhode Island. The 40-year-old Alabama native was viewed as an up-and-comer and a no-nonsense leader – the opposite of the hunch-playing, unpredictable Morgan, his senior by more than two decades.3 Hobson’s results, like Viola’s, had been mixed in the early going. Entering the game, the Red Sox were 6-7, tied for fourth in the AL East, five games behind the Toronto Blue Jays.

The Red Sox had played in unpleasantly cold, windy, and rainy conditions the day before in Milwaukee, losing 3-2.4 The forecast back in Boston also called for afternoon and evening rain, wind, and chill on April 24.5 But at the scheduled game time, Viola, Hobson, and 31,461 fans were in their places at Fenway Park as the Red Sox braced for a cold faceoff with the Rangers.6 (Not everyone was pleased about it. Huddled in the dugout before the game, Rangers third baseman Dean Palmer reportedly asked, “Can we call it and go home?”7)

The Red Sox and Rangers had engaged in a brief dustup during a spring-training game, trading brushback pitches. While a Boston Globe game preview flagged the possibility of bad blood, no drama developed during the game, and no batters were hit.8 The teams were scheduled to play three games at Fenway Park in their first faceoff of the regular season. The Rangers entered the game 9-8, tied for third in the AL West, 2½ games behind Oakland.

Texas’s starting pitcher, Jose Guzman, was beginning his sixth season in an interrupted career with the Rangers. He missed the entire 1989 and 1990 major-league seasons with injuries,9 then earned the 1991 AL Comeback Player of the Year Award by going 13-7 with a 3.08 ERA – including a pair of late-July wins against Boston. Like Viola, Guzman had made three starts thus far in 1992, but had fared better: He entered the game with a 1-1 record and 2.33 ERA.

Both teams also started defensive whizzes behind the plate. Boston’s Tony Peña had won his fourth and final Gold Glove the season before. The Rangers’ Ivan Rodriguez, just 20 years old and beginning a Hall of Fame career, won the first of 13 Gold Gloves in 1992.

A stiff wind blowing in saved Viola from what might have been another rough start. Designated hitter Brian Downing, Palmeiro, and Gonzalez all delivered threatening, hard-hit balls in the first inning that were cut down into outs by the wind. Viola later joked that he saw Gonzalez’s shot to center field and was ready to ask home-plate umpire Larry Barnett for a new ball, but then turned around and saw Ellis Burks making the catch.10

The teams traded unsuccessful rallies for the next few half-innings. In the bottom of the first, Greenwell singled and Burks reached when shortstop Dickie Thon misplayed his grounder. Plantier flied out to end the threat.

In the top of the second, Texas put two men on with a walk and an error by Boggs, only to have Viola induce a pair of inning-ending grounders. In the bottom half, a single by first baseman Mo Vaughn and a double by shortstop Luis Rivera brought Boggs to the plate with two out. The five-time batting champion lined out to center. And in the third, a walk to Downing and a single by Gonzalez put runners on the corners with two out for Franco. Franco hit .423 in 52 lifetime at-bats against Viola, but the pitcher won this matchup with a strikeout.

Guzman later said he was “having a hard time feeling the ball” in the third inning, and Boston took advantage.11 Guzman walked second baseman Jody Reed and Burks, with an out sandwiched in between, and threw a wild pitch that moved the runners to second and third. Plantier ripped a double just out of left fielder Jack Daugherty’s reach, scoring both runners. (One news account said Daugherty showed “no finesse at all” in pursuing Plantier’s drive.12) Clark singled Plantier to third, and Vaughn’s liner to Sierra in right was deep enough to bring Plantier home for a 3-0 lead.

The Rangers struck back in the fifth, with their sole run coming from a familiar source. Downing – who had joined the Rangers as a free agent before the 1991 season, after 13 campaigns with the California Angels – laced a Viola pitch into the screen above the Green Monster, Fenway Park’s looming left-field wall, to make the score 3-1. It was the 41-year-old13 Downing’s 26th career regular-season home run against the Red Sox and his 16th at Fenway Park, tying him with Gary Gaetti for the most among active players at the time.14 It was the Rangers’ third hit of the night, and also their last.

Burks led off the bottom of the fifth with an infield hit, but Rodriguez gunned him down trying to steal. Guzman whiffed Plantier and Clark to end the inning.

With the game official (“We knew the rain was coming,” Vaughn said, “we were fighting against it, trying to get [the game] in on time”),Viola plowed through the top of the sixth with little trouble.15 Palmer walked with two out, but Daugherty swung through Viola’s 107th pitch of the game to close out the inning.16 After Vaughn led off the bottom half with a single, heavy rain forced umpire Barnett to halt the game at 9:31 P.M. The rain never let up, and slightly more than an hour later, Barnett declared the game over.17

One Texas-based writer compared the clammy New England spring weather to something out of horror writer and New Englander Stephen King’s work.18 But in the home clubhouse, all was sunshine as the Red Sox appreciated their good fortune and Viola savored his first Boston win. “I – we – were due for one like this,” Viola said.19

The rainy weather might have been an omen, though, as the teams and some of the key players had cloudy times ahead. The Rangers finished fourth that season, 19 games back, with a 77-85 record. The Red Sox slid all the way to last place with a 73-89 record, 23 games out. Hobson managed three seasons with the Red Sox and never posted a winning record.

Downing, Texas’s home-run hero, logged nine more homers and 36 more RBIs in what proved to be the last of his 20 major-league seasons. The 1992 season also turned out to be Clark’s last of 18 seasons, as the four-time former All-Star hit just .210. And Viola, the big-ticket free agent, was solid but not dominant in his first two seasons with Boston, winning 13 and 11 games in 1992 and ’93. In May 1994 he suffered an injury that required Tommy John surgery. It effectively ended his career, although he fought his way back to the majors for a handful of games.

This foreshortened contest was the first major-league game the author attended in person. Drawn by Fenway Park’s distinctive atmosphere, he returned five nights later on April 29 and saw Frank Viola’s second win in Boston, this time a 6-1 decision over the Chicago White Sox.

3 Jackie MacMullan, “A Man Who Gives His All, Gets Respect in Return,” Boston Globe, October 9, 1991: 45; as well as other Globe coverage of Morgan’s firing and Hobson’s hiring from the same date.

6 The attendance figure is per Retrosheet, Baseball-Reference, and the Boston Globe. Ballparks.com lists Fenway Park’s 1992 capacity as 33,925, which would mean the park was almost 93 percent full on this inclement spring night. The author, who was present, does not recall the ballpark seeming quite so full, although that might be a failure of memory.