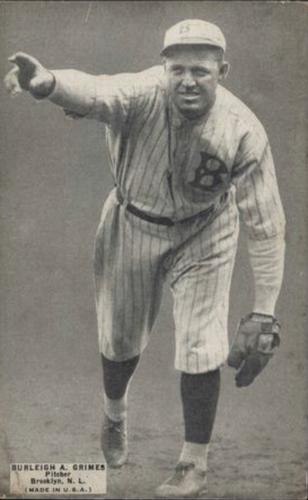 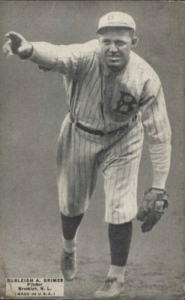 “One of the most sensational ballgames ever played on any ballpark,” raved sportswriter Jim Nasium about the Philadelphia Phillies-Brooklyn Robins 20-inning, 9-9 tie on the last day of April 1919. The matchup featured clutch hitting and fantastic fielding, as well as soul-crushing errors and strikeouts in pivotal situations.1 In what Phillies beat reporter Robert W. Maxwell described as an “extra-inning double header rolled into one,” hurlers Burleigh Grimes of the Robins and Joe Oeschger of the Phillies went the distance in an epic battle that equaled the mark for the longest big-league game in Philadelphia history.2 “[F]or spirited battling, the game has seldom been equaled,” declared the Brooklyn Times.3

Only about 1,300 spectators ventured to the Baker Bowl, located at the intersection of Broad and Huntingdon Streets in North Philadelphia, on a crisp, 60-degree Wednesday afternoon to watch the rubber match of a three-game series between the Robins (4-1) and Phillies (3-2).4

Both teams were expected to repeat their second-division finishes from the previous season. Former Philadelphia A’s star pitcher and first-year Phillies skipper Jack Coombs, who had spent his final four seasons as an active player (1915-1918) with Brooklyn, hoped to neutralize the Robins’ right-handed-heavy lineup with hard-throwing righty Oeschger. The 26-year-old was coming off a disastrous 1918 campaign with just 6 wins and 18 losses (tied for the most in the majors), bringing his five-year slate to 27-40.

Just three seasons removed from a pennant, Brooklyn skipper Wilbert Robinson needed right-hander Grimes to continue his ascendancy as one of the league’s best pitchers to have a chance for a winning season. After a dismal 5-19 record in two seasons with the Pittsburgh Pirates, the 25-year-old spitballer was one of baseball’s biggest surprises in 1918, going 19-9 with a 2.13 ERA (130 ERA+) in his first season for Uncle Robbie.

Pitching erratically, Grimes and Oeschger were lucky to make it through the third. The Phillies’ Dave Bancroft tripled in the first to drive in Cy Williams for the game’s first run. The Robins responded with four straight singles in the second for two runs but should have gotten another. According to the Brooklyn Eagle, in a play “reminiscent of Hans Wagner,” shortstop Bancroft cut off center fielder Williams’s throw to the plate on Lew Malone’s single – which had scored Hi Myers with the tying run – and gunned down Ed Konetchy at third for the second out. Ernie Krueger’s single then plated Malone from second for a 2-1 lead.5

In the third, the Robins pounced on Oeschger, who had given up five runs in four innings in his only other outing of the season. “[I]t looked as if the staff was off for the afternoon,” quipped Nasium.6 With two out and two on, Myers doubled to drive in Tommy Griffith. Konetchy followed with a single, driving in both Zach Wheat and Myers, but was erased at second on left fielder Possum Whitted’s throw.

The Phillies rallied with two outs in the bottom of the third when Bancroft singled and scored on Fred Luderus’s double. After Whitted walked, Doug Baird drove both runners home on a double that pulled the Phillies to within one, 5-4.

While the Robins – also called the Superbas and Dodgers by Brooklyn newspapers – went scoreless from the fourth inning through the eighth despite having at least one baserunner in each inning, the Phillies took the lead in the bottom of the eighth. Luderus led off with a double, moved to third on Whitted’s sacrifice, and evaded second baseman Lee Magee’s throw home on Baird’s grounder to tie the game, 5-5. After Harry Pearce grounded out, Hick Cady bounded to short, but Ivy Olson’s throw to first drew Konetchy off the bag; Baird scored to give the Phillies a 6-5 lead.

With Oeschger and the Phillies three outs from a comeback win, shoddy defense helped Brooklyn tie the game in the ninth. Bancroft fumbled pinch-hitter Jim Hickman’s grounder, though no error was charged.7 With Hickman on third and two out, Magee “whacked one straight” at Pearce, wrote Jim Nasium.8 “[It] looked like the final out,” he continued, but the keystone sacker fumbled the ball and then “fell down in his frenzied efforts to get the ball to first” while Hickman scored the tying run.

After Leo Callahan walked to lead off the ninth, Myers “robbed” the Phillies of victory, opined Nasium, with a running catch of Bancroft’s smash to deep center.9 Three batters later, Coombs faced a tactical decision following Luderus’s single with two outs. Instead of calling on pinch-hitters Gavvy Cravath, who had led the NL in home runs in five of the previous six seasons, and Irish Meusel, he let Whitted bat. Still recovering from throat surgery a month earlier, Whitted fouled out to first to send the game into extra innings.10

The game’s second nine innings were replete with fielding highlights and excellent pitching. The Robins’ best scoring opportunity came in the 14th. Olson drew a one-out walk and raced to third on Magee’s single. Pearce “redeemed himself” with two potential game-saving defensive gems.11 He scooped up Griffith’s hard grounder and threw out Olson at home. Zack Wheat, who had led the NL with a .335 batting average in ‘18, was walked intentionally to fill the bases. Myers hit a “wicked bounder,” but Pearce “leaped into the air … nabbed it on a bad hop[,]” and threw to first to end the frame.12

The “best play of the afternoon,” according to Maxwell, occurred in the 18th.13 Luderus made a “sensation[al] play” with Mack Wheat on first and one out. Grimes’s hot bouncer toward first had “earmarkings of a sure hit,” when Luderus “made a high leap” to corral the ball. Instead of touching first, he threw to second for the force, then received the return throw from Bancroft for a twin killing.

After yielding 10 hits in the first nine innings, Grimes completed an “astounding flip flop” in the second nine, wrote Robins beat writer Thomas S. Rice, by surrendering just one hit.14 It would have been several more had it not been for the acrobatic game-saving catches of Myers, whom Maxwell called the “the real hero” of the game.15 He robbed Pearce of a “sure triple,” according to Nasium, in the 10th, and of another hit in the 15th.16 The Phillies’ best scoring opportunity came in the 14th. With two outs and Williams on second, Luderus was intentionally walked to face Whitted. Once again Coombs eschewed a pinch-hitter, and Whitted reached on a fielder’s choice to fill the bases17 before light-hitting Doug Baird fanned to end the frame.

With Pearce on first with two outs in the 18th, Myers added yet another gem to his highlight reel by going deep into center field to catch Cady’s smash, which “prevented a sure Phils victory,” wrote Maxwell.18

While the extra innings had “fans up on the backs of their seats yelling and forgetting about their family and friends,” the top of the 19th silenced the small crowd.19 After singles by Olson and Griffith sandwiched around Magee’s failed sacrifice bunt, Wheat “whiffed woefully,” declared Rice.20

Myers, who “had been hitting so feebly,” continued Rice, lofted a fly to deep left field. Nasium wrote that it “looked as though [Whitted] would snare the ball, but he turned too soon” and the ball sailed over his head.21 According to Rice, the ball “landed just in front of the left-field bleachers with tremendous speed, took a high bound, hopped into the bleachers and became an unqualified home run,” giving the Robins a stunning 9-6 lead.22

The Phillies caught a break in the bottom of the frame when Griffith made a long run to reach Williams’s fly to right but “muffled [the catch] for a pardonable error,” wrote Rice.23 After Bancroft forced Williams and Luderus singled, Whitted’s single drove in Bancroft. Baird followed with a tricky bounder back to the bound. Grimes knocked the ball down, retrieved it, and threw to first just in time to nab Baird.24

With the game on the line, Coombs finally called on his pinch-hitters. Meusel, hitting for Pearce, walked to load the bases. Cravath, the leader in career home runs among active players, “strode through the gathering gloom,” wrote Maxwell, to hit for Cady.25 The 38-year-old “banged an enormous single against the short right field fence,” wrote Rice.26

Luderus and Whitted easily scored to tie the game again. “Meusel might have scored the winning run,” mused Rice.27 Before receiving the relay from Callahan, Konetchy bluffed a throw to third, causing Meusel to slow down before reaching third and then again after passing the bag.28 Konetchy whipped the ball to Malone, who chased Meusel home, where he was tagged by Wheat.

“[I]t was dark when the twentieth inning started,” reported the Brooklyn Citizen, when home-plate umpire Bill Klem informed both teams they would have one last chance to decide the game.29 After the frenzied 19th, the 20th inning sputtered with Oeschger working around Malone’s leadoff walk, and Grimes stranding Callahan after his one-out double.

After 20 innings and 4 hours and 10 minutes, Klem declared the game a tie, 9-9.30 The 20 innings proved to be the longest in Grimes’s 19-year Hall of Fame career. He yielded 15 hits, fanned eight, and walked seven while facing 79 batters. Grimes developed a sore arm by June, missed almost two months, and finished with a disappointing 10-11 record. Oeschger surrendered 24 hits, punched out two, walked four, and faced 84 batters.31 He made only three more appearances for the Phillies before being traded to the Giants on May 4. With the Boston Braves in 1920, Oeschger was involved in the longest game in big-league history. On May 1 he and the Robins’ Leon Cadore went all 26 innings in a 1-1 tie. Oeschger is the only known pitcher with two games of at least 20 innings pitched.

2 Robert W. Maxwell, “Phillies End Home Stand With Extra Inning Twin Bill,” Philadelphia Evening Pubic Ledger, May 1, 1919: 11. The 20-inning game tied the one played by the Phillies and Cubs on August 24, 1905; the Cubs’ Ed Reulbach and the Phillies’ Tully Sparks went the distance at the Baker Bowl.

5 According to the play-by-play information on BaseballReference.com, Oeschger, and not Bancroft, threw the ball to third to nab the runner. However, it seems unlikely that the pitcher would have been in that position to cut off the relay throw. Of the Philadelphia Inquirer, Philadelphia Evening Public Ledger, Brooklyn Eagle, Brooklyn Times, and Brooklyn Citizen, only the Eagle reported on this specific play and devoted a paragraph to it. “Many Runs with Two Out Feature Long Distance Game,” Brooklyn Eagle, May 1, 1919: 18.

7 There is some discrepancy about this sequence. According to the Brooklyn Eagle, Ernie Krueger hit for himself and then was replaced by pinch-runner Jim Hickman. The paper also noted Bancroft’s fumble. Game accounts in the Philadelphia Inquirer, Philadelphia Evening Public Ledger, Brooklyn Times, and Brooklyn Citizen did not report on this play.

10 Maxwell. According to the Inquirer, Whitted had undergone an unidentified throat operation, likely to have his tonsils removed, in early April; see “Five Outfielders Fighting for Job” Philadelphia Inquirer, April 8, 1919: 14.

22 Rice. According to the NL rules at the time, balls that traveled at least 250 feet and then cleared the fence on one bounce were home runs.

24 Play sequence according to Maxwell.

28 According to Rice, pitcher Grimes received the relay throw; however BaseballReference.com has Konetchy receiving the relay throw. Just like the Robins’ defensive play in the third (also mentioned in Note 5), it seems unlikely that the pitcher and not an infielder would receive the relay throw.

30 The box score at Baseball-Reference.com gives the length of the game as exactly 4 hours; according to the Public Ledger, it was 4 hours and 10 minutes. See “Bingles and Bungles,” Philadelphia Evening Public Ledger, May 1, 1919: 17.

31 The two hurlers faced each other in their next start, on May 6 at Ebbets Field. Grimes went the distance (yielding just two earned runs) while Oeschger lasted three innings (six earned runs) in the Robins’ 11-9 win.