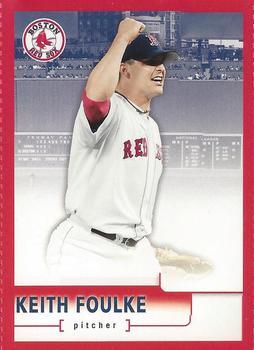 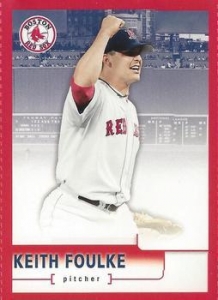 One of Red Sox GM Theo Epstein’s major acquisitions for the 2004 season was right-handed pitcher Curt Schilling. The Arizona Diamondbacks traded him on November 28, 2003, two weeks after his 37th birthday, in a deal that netted Arizona four players.1 Schilling had led the majors with 22 wins in 2001 and had been 4-0 in the postseason for the Diamondbacks, including a win over the New York Yankees in Game One of that year’s World Series. He won 23 games the following year, but an appendectomy and broken hand cost him much of the 2003 season. The Red Sox had first drafted Schilling in 1986 but traded him to the Baltimore Orioles in 1988, before he had pitched in a major-league game.

The veteran was manager Terry Francona’s choice to start the second game of the 2004 season, on April 6 at Baltimore’s Oriole Park at Camden Yards. Pitching for Lee Mazzilli’s Orioles, hoping to build on the team’s 7-2 win against the Red Sox on Opening Night, April 4, was left-hander Eric DuBose. He’d worked four games in 2002, then fairly steadily in the second half of 2003. In 17 games, he had been 3-6 with a good 3.79 ERA for Baltimore.

It was DuBose’s 11th career start and Schilling’s 339th. As a Washington Post writer observed, “Schilling, in fact, has made 142 more big-league starts than the Orioles’ entire rotation, a reality that makes the Orioles’ gamble on their young pitching look frightening.”2

Each team sent up three batters in the first inning. Boston third baseman Bill Mueller was the only batter to reach base but was taken off the basepaths when DH Ellis Burks grounded into an inning-ending 6-4-3 double play.

The Red Sox went ahead in the second. Left fielder Manny Ramirez walked on five pitches to lead off the inning. First baseman David Ortiz singled into right field, Ramirez holding at second base. Right fielder Kevin Millar hit a grounder back to DuBose, who threw Ortiz out at second.

With catcher Jason Varitek at bat, the first run of the game scored on DuBose’s wild pitch, Ramirez running home. The pitch was indeed wild: As the Baltimore Sun explained, “[DuBose’s] cleat got caught on the mound during his delivery, and he fired an awkward pitch all the way to the backstop, a good 15 feet off-target—or, in Uecker speak, ‘just a bit outside.’ DuBose nearly fell face first. ‘I thought I was a goner there for a second,’ he said.”3

Millar took second on the wild pitch and then scored when Varitek singled to right-center for a 2-0 Boston lead. Second baseman Mark Bellhorn walked but the next two batters grounded into outs.

After getting one out in the bottom of the inning, Schilling allowed two singles—both to center field (catcher Javy Lopez and right fielder Jay Gibbons)—but was again helped out by a double play.

Only one batter reached base in the third inning—O’s center fielder Luis Matos on a single off Schilling.

In the top of the fourth, the Red Sox added a run when Millar hit a one-out solo home run to left field. Meanwhile, Schilling continued his efficient work. As the Baltimore Sun observed, through his first three innings, “the 37-year-old Schilling provided the 27-year-old DuBose with a clinic, throwing first-pitch strikes to the first 10 batters he faced.”4

Burks drew a two-out walk for the Red Sox in the top of the fifth but was forced out at second base on Ramirez’s grounder to shortstop Miguel Tejada.

The Orioles got on the board in the bottom of the fifth. After one out, left fielder Larry Bigbie singled to right. Matos collected another hit, an RBI double to left-center that drove in Bigbie. Schilling got the next two batters to fly out.

Mazzilli replaced DuBose in the top of the sixth, after a one-out error put Millar on base and DuBose walked the bases loaded on seven pitches to Varitek and six to Bellhorn.5 John Parrish came on in relief. The first batter he faced was shortstop Pokey Reese. The Orioles brought the infield in. Reese grounded the ball hard to second baseman Brian Roberts, who fired the ball home to Lopez, cutting down Millar at the plate. Johnny Damon flied out to right field and the threat was over. The Red Sox still led, 3-1.

Schilling was still dealing. With one out in the sixth, he walked first baseman Rafael Palmeiro but struck out both Lopez and Gibbons swinging.

After two outs in the Boston seventh, Ramirez walked. Parrish had Ramirez picked off first, but his throw went astray and Ramirez made it to second. Parrish got Ortiz to pop up to second base, stranding Ramirez.

Alan Embree took over pitching for the Red Sox and retired the Orioles in order in the bottom of the seventh. In turn, Parrish set down the Red Sox in order in the top of the eighth. Mike Timlin replaced Embree and likewise retired all three batters he faced.

In the top of the ninth, Parrish surrendered a single to Reese. Damon walked. Mike DeJean was brought in to face Mueller and got him to ground into a 3-6-1 double play, Reese taking third. Burks then hit a ball to third baseman Melvin Mora, which Mora misplayed. Reese scored for a 4-1 lead. Gabe Kapler came up to bat, and Reese stole second but got no farther as Kapler grounded out, third to first.

It was the bottom of the ninth. Francona called on the man planned to be his closer, Keith Foulke, acquired as a free agent over the winter. Foulke had saved an American League-leading 43 games for Oakland the year before (and had been 9-1 with a 2.08 ERA). He earned his first save for the Red Sox by getting Palmeiro to ground out short to first, Lopez to fly out to right field, and Gibbons to strike out swinging.6

The bullpen had been perfect. In three innings of work, Embree, Timlin, and Foulke faced nine batters and set them all down in succession.

The Red Sox had their first win of the 2004 season.

DuBose had pitched reasonably well, allowing only four hits in his 5⅓ innings, but he had walked six. Schilling allowed six hits in six full innings, but walked only one.

Schilling had his first of what became 21 wins, the best in both leagues, his 21-6 record the best winning percentage in the AL. He later went on to win one game in each round of postseason play. After his first Red Sox win, Michael Holley had written of the Red Sox pitcher, “You can call Schilling a No. 2 starter if you want, but it’s like saying ‘Othello’ is No. 2 in Shakespeare’s rotation after “Hamlet.’”7

This game was fact-checked by Russ Walsh and copyedited by Len Levin.

1 It was a trade that worked out well for both teams. The Diamondbacks received three pitchers, all of whom continued or went on to major-league careers: Jorge De La Rosa, Casey Fossum, and Brandon Lyon, and outfielder prospect Mike Goss. Interestingly, just three days later, De La Rosa—who ultimately won 104 games in his major-league career—was part of a nine-player trade Arizona made with the Milwaukee Brewers.

5 The error was one of two committed by Melvin Mora, playing third base regularly for the first time in his career. It was his third error in the first two games of the new 2004 season. He committed a career high 21 in 2002 but was five behind Cleveland’s Casey Blake.