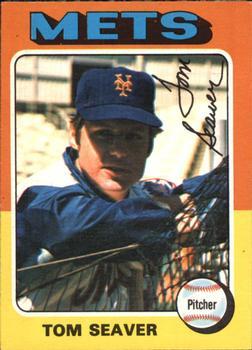 Opening Day 1975. The National League celebrated the centennial of its founding. The New York Yankees shared Shea Stadium with the Mets while their ballpark in the Bronx underwent a renovation. Shea Stadium was a busy place that year; it was also used by the NFL’s two New York teams, the Jets and the Giants.

After a disappointing 1974 season, the Mets made several moves in the offseason that gave them hope that they might return to the postseason. They purchased Dave Kingman from the Giants. They traded for Joe Torre from the Cardinals and acquired John Stearns and Del Unser from the Philadelphia Phillies in a trade involving closer Tug McGraw. Many of the 18,527 fans who braved the 47-degree temperature and wind to attend the opener were curious to see how these new Mets would perform when it counted after the team went 8-18 in spring training.

For the third time in a row, Tom Seaver and Steve Carlton faced each other to inaugurate a new season. Seaver had bested Carlton in 1973; neither received a decision when Mike Schmidt’s two-run homer off McGraw in the bottom of the ninth gave the Phillies a 5-4 win a year later. The big question on many Mets fans’ minds was whether Seaver would rebound after he went 11-11 with a 3.20 ERA, the highest of his career, in 1974, and being diagnosed with a sciatic nerve problem and a dislocated pelvis late in the season. After recovering from both injuries, Seaver was looking forward to the season.

Before the game, Seaver said he was ready to put aside the comparisons with the Yankees’ Catfish Hunter, whose signing by the Mets’ cross-city rivals in the offseason had played out in the press all winter. Hunter’s arrival signaled that Seaver’s reign as the city’s pitching ace might not be guaranteed any longer. “It’s all in the fans’ minds, and it’s good for the fans—the way it was when they used to compare Mickey Mantle, Willie Mays, and Duke Snider as New York’s center fielders. But I can only pitch in relation to myself,” Seaver commented.1

Seaver gave up a single to leadoff hitter Dave Cash, and Phillies manager Danny Ozark gave Larry Bowa the hit-and-run sign. Bowa hit a line drive, but it went straight to shortstop Bud Harrelson, who tagged Cash to complete an easy unassisted double play. Bowa was disappointed, saying afterward, “It’s a base hit if he’s not running. Damn, we would have had him on the ropes. First and third with nobody out and the mashers coming up.”2

Seaver had two strikeouts in the second, giving fans a sign that he had returned to form, but he walked Bob Boone to start the third. Boone reached second on Carlton’s sacrifice and scored on Cash’s second hit, a double to right field. Seaver watched as his two new teammates, Kingman and Unser, chased the ball. Kingman looked as though he might have a chance at the catch but lost the ball in the sun. It would turn out to be the only Phillies run of the game.

Meanwhile, Carlton was looking to regain the pitching that had earned him the Cy Young Award in 1972. After going 27-10 in that stellar season, he was 29-33 over the following two seasons despite leading the league in strikeouts in 1974.

Carlton worked himself out of trouble in the first. Gene Clines led off with a single and reached third on a balk and a groundout to the right side of the infield. But he was stranded there when John Milner flied out to center field and Torre’s weak grounder down the first-base line led to an easy third out.

Another Mets double in the third led nowhere. But New York finally scored when Kingman hit a solo homer in the fourth to tie the game. Red Smith, writing for the New York Times, noted that Kingman “went fishing for two pitches by Carlton over the heart of the plate, eyebrow high. Having got two strikes on bad pitches, Carlton threw one a trifle worse, low and outside. Kingman spooned it out past the visitor’s bullpen.”3 Mets manager Yogi Berra expressed his satisfaction, saying, “He’ll go to left field Thursday. He’ll be there every day.”4

Carlton then settled down and allowed no more hits for the next four innings, while Seaver also kept the Phils in check. Philadelphia threatened just once, when Boone led off the eighth with a single and Alan Bannister’s sacrifice moved pinch-runner Terry Harmon to second. With two outs, Seaver gave an intentional pass to Cash, who had two hits against him, in order to face weak-hitting Bowa. His strategy almost failed when Bowa hit a line drive that Unser had to chase down in center and make a leaping catch with his back to the plate.

“I looked up and he had it like a snow cone. I thought it was over him,” Bowa said. Unser noted, “I lost it in the sun and had to wait for it to come out of the glare. Then I spun my spike in the mud. I just stuck up my glove and got about half the ball.”5

Philadelphia had another chance to take the lead in the ninth. With one out, Greg Luzinski hit a double that missed being a home run by just a few feet. “I was looking for a pitch I could jerk. … Seaver’s smart. You swing at the high pitch, he’s going to keep throwing high. His ball does a lot of tricks upstairs. You’ve got to make him bring it down. Today’s the type of day you’ve got to beat him.”6

With Luzinski on second, that brought up Schmidt, who broke out in 1974 with a major-league-leading 36 home runs but had struck out his three previous times in this game. This time he popped up. Jay Johnstone pinch-hit for Mike Anderson, who had gone hitless against Seaver that afternoon. Johnstone fared no better, grounding out on a slow roller to second for the third out.

In the bottom of the frame, Felix Millan led off with a single. Milner then walked on four pitches. The question on fans’ minds was “Would Torre bunt runners to second and third and give Kingman another shot?”7 Carlton said later that he expected the bunt. “I thought Yogi would try to stay out of a double play.”8

But Berra surprised the crowd and gave Torre the sign to swing away. Carlton threw a low fastball. Torre lined it into left field. Millan raced around third. Luzinski’s throw home arrived too late and the Mets won 2-1.

Torre said later, “I was glad that I didn’t get the bunt sign. I knew I could look for a fastball. He’d been throwing curves outside on me and then coming in on the fists with the fastball.” Berra explained his move, saying, “Bunt? Nope. Joe drives in runs. That’s why we got him.”9

Asked if he had run out of juice, Carlton said he wasn’t tired. He knew that he had to challenge Torre. Carlton said he threw “a bad pitch,” adding, “It was below the knees on the outside part of the plate. Not much you can do there. Just go after him and hope for the best.”10

For Carlton, it was a disappointing end to an excellent effort.  The left-hander finished with six strikeouts and allowed just four hits. It was also the beginning of another uninspiring season that he finished with a 15-14 record and 192 strikeouts.

Torre, who had been born in Brooklyn, always wanted to play in New York. The game-winning hit made his homecoming just a bit sweeter. “You’ve got to get excited about excited hitting in this park, got to get excited here, got to really enjoy playing here. I couldn’t ask for a better way to start the season.”11

Seaver was pleased with his mound work in his fourth Opening Day victory. He struck out nine and walked two. “Opening Day usually is not one of my better performances,” he said. “When I went to the mound this time, I was determined to pitch deliberately, to slow down. Things fell into place after the third inning. I threw 120 pitches, 76 of them fastballs, and that’s normal. Now I feel great, no twinges in the hip or anything.”12

Seaver’s performance was indeed a sign that he wasn’t ready to relinquish his role as the city’s premier pitcher. He finished the season with a 22-9 record, the most wins in the league. His 243 strikeouts also led the National League. Besides returning to the All-Star Game, Seaver earned his third Cy Young award.