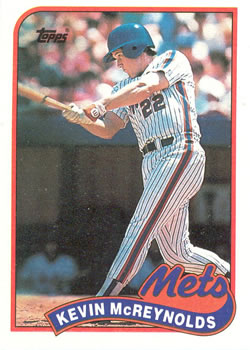 The New York Mets were struggling to stay in contention in the National League East in July 1989. After winning six games in a row in the middle of July, they closed out the month by losing seven straight. At the trade deadline on July 31, Mookie Wilson was traded and Frank Viola joined the team in a multiplayer deal.1 Darryl Strawberry described the changes by telling reporters that “[i]t’s like opening day.”2

Manager Davey Johnson echoed that sentiment by revamping the Mets lineup for their first game after the trades. Keith Miller, hours after arriving from the Mets’ Tidewater team, was penciled into the leadoff spot. Dave Magadan moved to sixth and Barry Lyons replaced the injured Gary Carter behind the plate. “A little shakeup to add a little energy,” Johnson said.3

The Cardinals, in third place in the NL East, five games behind the first-place Montreal Expos, had put two games between themselves and the Mets after beating them the previous day. Both teams were looking to stay relevant in their division, but for today winning the NL East was perhaps secondary to just beating each other; the two teams had become fierce rivals during the 1980s. Division titles had been swapped by both teams over the past four years – the Cardinals in 1985 and 1987, the Mets in 1986 and 1988. Cardinals fans had even called the Mets “pond scum” several years before.4

Cardinals manager Whitey Herzog started right-hander Scott Terry in the second game of the series on August 1. Terry had started eight games against the Mets over the previous three years and had yet to get a win. This was his first time facing them in 1987.

Terry got out of the first unscored on although he did walk Howard Johnson, who stole second before Strawberry grounded out to end the inning. In the second, New York’s Kevin McReynolds led off with a double. After taking third on a groundball, he scored when Vince Coleman misplayed Lyons’ fly ball into a double. Although Terry recovered and got the next two batters out, the Mets had the lead, 1-0.

Mets starter Sid Fernandez was trying to rebound from his previous loss when he gave up five earned runs in three innings to the Pirates on July 27. This time out, Fernandez pitched well, keeping the Cardinals from scoring while the Mets clung to their one-run lead through the first five innings. “I didn’t have too much zip on my fastball,” Fernandez said afterward. “It was moving, but it didn’t have any life. It was one of those games where I had to pitch. If I tried to overpower them, I would have gotten hit.”5

Terry also kept the Mets from scoring in the third, fourth, and fifth innings, although they managed at least one hit off him in every inning but the fourth. The Mets finally blew the game open in the sixth inning. Juan Samuel – who had come to the Mets in a June 18 trade, with New York mainstays Lenny Dykstra and Roger McDowell going to the Philadelphia Phillies – led off with a double. Johnson’s single scored the speedy Samuel, and he took second on the throw home. Strawberry showed his power when he drove the third pitch from Terry to the fence in deep center. Milt Thompson made a leaping catch 415 feet from home plate, but it was deep enough that Johnson tagged and went to third.

McReynolds followed by hitting the first pitch into the upper deck for a home run that gave the Mets a 4-0 lead. It was his 10th home run of the season and his first since July 18.

Herzog decided it was time to replace Terry, who left the game still looking for a victory against the Mets. Frank DiPino took the mound and made it through the seventh without allowing any more runs to cross the plate.

The Mets expanded their lead in the eighth, after a Cardinal miscue. With Johnson on second and one out, Coleman was set to catch Strawberry’s fly ball to left when center fielder Milt Thompson ran in front of him. The ball bounced off Thompson’s glove for an error, leaving runners on first and third.

Herzog brought Dan Quisenberry in from the bullpen. The longtime Kansas City Royals submariner, in his second season in St. Louis in 1989, gave up a single to McReynolds, his third hit of the day, scoring Johnson. When Magadan doubled, Strawberry and McReynolds came home for a 7-0 Mets lead.

Ricky Horton, the fourth Cardinals pitcher of the game, faced the Mets in the ninth. A Cardinal from 1984 to 1987 before playing for two other teams, Horton had re-signed with St. Louis after being released by the Los Angeles Dodgers on July 16. This was his first appearance after returning to the Cardinals.

After getting Miller to fly out, Horton gave up singles to Samuel and Johnson and walked Strawberry to load the bases. With the count full, McReynolds hit a triple into the right-field corner to give the Mets a 10-0 lead. He scored their final run of the game on a groundout by Magadan.

Fernandez got the Cardinals out in order in the bottom of the ninth to finish his first complete-game shutout since July 1988. The win raised his record to 9-3 and he felt good, especially since he had lasted only three innings in his previous start. But he was still realistic about the Mets’ chances for the rest of the season, saying: “We still have a long road to travel. But it felt like old times to be scoring runs and not giving up any.”6

Fernandez’s performance came with what his manager said was “pretty much no fastball.” He failed to strike out a single Cardinals batter until the ninth when he struck out Pedro Guerrero to end the game. “I’ll take ground balls and fly balls anytime as long as we win, Fernandez said.”7

McReynolds’ triple made him the first Mets player to hit for the cycle since Keith Hernandez did it on July 4, 1985. It was only the fifth time in franchise history that a Mets player had accomplished this feat.

But it did not ease his summer of disenchantment, as the 29-year-old Arkansas native struggled to regain his 1988 form, when he finished third in the National League MVP voting for a division-winning team. In 1989 McReynolds’ numbers had declined, along with the Mets’ fortunes.

When McReynolds returned to the dugout after his sixth-inning home run, Fernandez went to congratulate his teammate, but “he just sat down, shook my hand, and that was it. He didn’t show any emotion.”8 McReynolds did not say anything to reporters after the game. He was unhappy with them since he had been criticized earlier in the season for his decline in offensive productivity. Johnson had tried to deflect some of that criticism when he said, “You can talk about Mac. You can talk about Straw. It’s not just one person.”9

While McReynolds never commented publicly on his cycle, he did berate the press one day later. He complained that it was unfair of the press to “poison people’s minds against me,” adding, “I feel like I’m a scapegoat. I’m unfairly criticized because the team’s not doing what it is supposed to do.”10

McReynolds was also unhappy because the press had been criticizing him about his weight. At one point, his wife even phoned into a radio call-in show to say that McReynolds was only two pounds heavier than the previous year.

Fernandez, who also dealt with weight issues during his career, said, “I’ve been through it. I’ve gone through it my whole career, not just in New York. It’s something I’ve gotten used to. I can handle it. But Kevin’s never been put through this before in his career. This is new to him.”11

Although McReynolds did not speak to the press, Strawberry noted the significance of the victory when he said, “[t]he monkey’s off our backs.” Johnson told reporters that the win is “what we needed.”12 McReynolds’ performance seemed to snap him out of his power slump: He hit nine home runs in August, matching his season total before July.13

The win did help the Mets get back on track as the team snapped its longest losing streak since 1984. The Mets’ previous win had come nine days earlier when they beat Atlanta 7-2. Only three games above .500 before the August 1 victory, New York then went 16-5 to reach second place, only 1½ games out of first. The Mets finished the season 12 games above .500 at 87-75, strong enough for second best, although they never caught up to the division-winning Chicago Cubs.

In addition to the sources cited in the Notes, the author used Baseball-Reference.com and Retrosheet.org for box-score, player, team, and season information, pitching and batting game logs, and other pertinent material.

1 The deadline deals in 1989 continued a series of trades that had altered the Mets’ clubhouse atmosphere after their 1986 championship season. The trades started in December 1986, when the Mets sent five players, including Kevin Mitchell, to the San Diego Padres for McReynolds and two other players. McReynolds took over left field for the next five years. While McReynolds had several solid or outstanding seasons in New York, the deal drew criticism for several reasons, including Mitchell’s development as a power hitter, culminating in receiving the MVP award in 1989, and McReynolds’ reported incompatibility with the team’s chemistry. “We got McReynolds, a very quiet guy. He was different, more laid back, opposed from how the team was in ’86 and ’87,” said Wally Backman. Peter Golenbock, Amazin’: The Miraculous History of New York’s Most Beloved Baseball Team (New York: St. Martin’s Publishing Group, 2016), 349.

9 Klapisch. Gary Carter remembered McReynolds’ reticence in conversing with his teammates as well as the press. “Even though Kevin McReynolds had great talent, my God, he could have cared less about anything. He’d show up in just enough time to throw his uniform on, go out and take batting practice, come in and as soon as the game was over he was already dressed and ready to leave by the time I had packed up my catcher’s gear and come up to the clubhouse.” Golenbock.

13 The 1990 season was to be McReynolds’ last productive season with the Mets. He signed a new contract before the 1991 season but failed to produce offensively. He finished the season with just 16 home runs and 74 RBIs. At one point, manager Bud Harrelson switched McReynolds and Hubie Brooks in the outfield but the move didn’t last long since neither player felt comfortable with the move. McReynolds continued to have a troubled relationship with the fans and the press, much as he had throughout his time in New York. “People here like to kick someone when they’re down, you more or less expect that in New York. I think a lot of people would like to see me fail,” he said in May 1991. “McReynolds Lets Bat Do His Talking,” New York Times, May 22, 1991: B11. The Mets traded him with Gregg Jefferies and Keith Miller to the Kansas City Royals for Bill Pecota and Bret Saberhagen in December 1991.