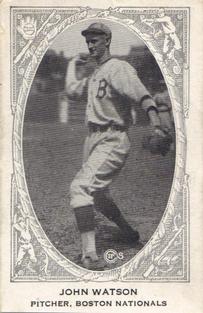 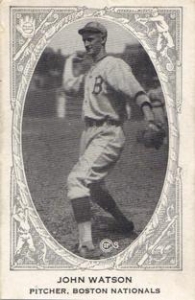 As the game of baseball began to grow in the twentieth century, a significant change in ballpark design occurred. Before 1909, most ballparks were located around recreation fields and built with wooden, one-level seating that did not fully enclose the field. These ballparks were subject to damage by fire and limited in seating capacity.

Shibe Park in Philadelphia, which opened on April 12, 1909, was the first ballpark built with concrete and steel. It was fully enclosed and featured a new architecturally designed two-tier grandstand. Braves Field in Boston, which opened in 1915, was one of the largest of the new-era ballparks. It emphasized large outfield dimensions that produced fewer home runs and many memorable pitching performances. One of the finest achievements at Braves Field occurred on Saturday, August 13, 1921, when Mule Watson of the Boston Braves started, completed, and won both games of a doubleheader against the Philadelphia Phillies.

While most pitchers were tall with larger body frames, Watson was leaner and shorter and thus one of the least likely to pitch both games of a doubleheader. The feat was more prevalent in the early part of the century, but by 1921 pitching two games in one day was uncommon. Watson was the first pitcher to do it in three years and it occurred only four more times after his big day. His two-hit shutout in the second game, an 8-0 win over the Phillies, was arguably the best-pitched game of his career, and afterward “He stated that he did not feel as tired as he had sometimes after pitching one game.”1

In the first three years of his career, Watson played for numerous teams as he developed his pitching skills. By 1921 he was a regular and respected member of the Braves pitching staff. His style was to pitch low in the strike zone, mixing his pitches to keep batters off balance and expose their weaknesses. His greatest asset was outstanding control. Off the field he had an easygoing personality, but on the mound he was considered “the meanest man in the league to bat against for he is never known to intentionally give a batter a ‘good ball’ to hit.”2

The day before Watson’s feat, the third-place Braves had lost both games of their doubleheader to Philadelphia and dropped to 8½ games behind Pittsburgh. A disappointing crowd of 15,000 was in attendance for the Saturday twin bill. In the first game Watson surrendered three runs on 10 hits in the Braves’ 4-3 victory. An early three-run lead by the Braves was too much for the Phillies to overcome. The victory improved Watson’s record to 9-8.

With a win secured in the opener, the Braves elected to field the same lineup in the second game. When Watson returned to the mound, many fans were surprised and questioned the decision by manager Fred Mitchell. Additionally, catchers normally do not work both games, but because Watson and Mickey O’Neil had become a successful battery for the Braves, O’Neil trotted out to the field with Watson.

After Watson retired the Phillies in order in the first inning, the Braves countered with two runs in their half. Leadoff hitter Ray Powell walked and moved to second on a single by Walter Barbare. Barbare had been obtained in an offseason trade with Pittsburgh, along with Billy Southworth and Fred Nicholson, for future Hall of Famer Rabbit Maranville. Playing as a regular shortstop for the first time, Barbare was having his finest year, setting career highs in almost every offensive category. With two runners on base, Southworth drove Powell home with a single to right. Walton Cruise plated Barbare with a single to left and the Braves were on top, 2-0.

Watson mowed down the Phillies in the second, third, and fourth innings while the Braves added to their score. Three straight singles by Walter Holke, Hod Ford, and O’Neil to start the fourth plated a run scored by Holke. Second baseman Horace “Hod” Ford, a native of New Haven, Connecticut, was another Braves player getting a chance to play regularly and taking advantage of the opportunity by setting career highs in hits and doubles. Later in the season the Braves held a day in his honor so New Haven and Boston fans could “pay their respects to one of the shining lights in Major League Baseball who has done such fine work for the Braves this season.”3

The next batter after the three hits was Watson and his grounder was mishandled by Phillies shortstop Frank Parkinson, his 28th error of the season, and Ford scored. Powell advanced O’Neil and Watson with a bunt. Barbare’s grounder and Southworth’s single scored two more runs. Southworth played with Pittsburgh the previous three years and was not happy with the trade that brought him to the Braves. The Pirates were winners and the Braves had been a second-division team since the pennant winning year of 1914. Despite his disappointment, he signed his contract, was named captain of the team and hit .308 as the Braves finished with their first winning record since 1917.

Watson did not allow a baserunner until Russ Wrightstone hit a two-out double in the fifth inning. He was left stranded when Parkinson flied out to right. Frank Bruggy led off the sixth inning with a double and took third on a grounder by John Monroe, but failed to score when Jimmy Smith flied out to left. The two doubles were the only hits Watson surrendered and the Phillies did not threaten to score the rest of the game.

Phillies pitcher Jesse Winters fared significantly worse than Watson. After pitching the final two innings of game one, he surrendered six runs through six innings in the second game and was still on the mound when the Braves added to their lead in the seventh. A single by Cruise, a triple by Tony Boeckel, and a single by Ford scored the seventh and eighth runs. Boeckel was a favorite of the fans as he took advantage of the spacious outfield. His blistering speed produced 13 triples and 8 inside-the-park home runs in his transcendent year with the Braves.

The game ended with the Braves winning 8-0. Balanced hitting and Watson’s pitching secured the win and the doubleheader sweep. Every member of the lineup reached base with Ford and Cruise each getting three hits. Watson retired 15 batters on fly outs, five on strikeouts, and the rest on routine plays. The Braves pulled to within eight games of the first-place Pirates but ultimately fell short in their quest for the National League pennant. Nonetheless, for one memorable day in August, Watson provided the fans an event to celebrate.

In addition to the sources cited in the Notes, the author relied on Baseball-Reference.com and retrosheet.org.