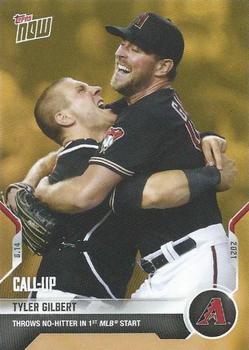 Arizona Diamondbacks left-hander Tyler Gilbert (0-1, 0.00 ERA1) was making his first major-league start. His family was among the 16,716 fans at Chase Field enjoying the comfortable 75-degree temperature with the roof closed.2 The 27-year-old California native had been drafted by the Philadelphia Phillies in 2015, then traded to the Los Angeles Dodgers, then selected by the Diamondbacks in the 2020 Rule 5 draft.

Gilbert’s first two teams developed him as a reliever, but the Diamondbacks converted him to starting. Because of the pandemic, he did not pitch in 2020, instead working with his father in the family electrical business.3 Gilbert’s 2021 record with the Triple-A Reno Aces of the Pacific Coast League was 5-2 with a 3.44 ERA – not bad in a league with a reputation of being a hitter’s league.

The San Diego Padres (66-52) were in Phoenix for a four-game series. They had led the National League West in May, but had since slipped to third place, 9½ games behind the San Francisco Giants. The Padres were certainly missing their young star and leading hitter Fernando Tatis Jr., who was working his way back from a shoulder injury suffered on July 30.4 Even though the Padres were away from home, the number of “Let’s go Padres!” chants during the game suggested they had some fan support at Chase Field.

Arizona (37-80) was in last place, 38½ games behind the Giants. They had won only two games in August before the Padres came to town, but then took the first two games of the series, raising their record for the month to 4-8.

San Diego native Joe Musgrove (8-7, 2.81 ERA) had pitched the season’s first no-hitter, on April 9, starting a spate of no-hitters in April and May and breaking the Padres’ franchise no-hitter drought in their 53rd season.6 Although the 28-year-old Musgrove wasn’t San Diego’s Opening Day starter, by year-end he was clearly the Padres’ best pitcher.7

This game, however, did not exemplify that effectiveness. Josh VanMeter hit his first pitch off the center-field fence for a double. Ketel Marte knocked VanMeter home with another double. Pavin Smith singled, Marte held at third.

Musgrove struck out Asdrúbal Cabrera (who then got tossed for arguing about the strike zone8), but David Peralta celebrated his 34th birthday by singling in Marte. That prompted a mound visit from pitching coach Larry Rothschild.

It didn’t help.9 Drew Ellis, playing in his 11th major-league game, hit his first career home run for a 5-0 lead. Musgrove walked Daulton Varsho, but got Nick Ahmed to foul out. That brought up Gilbert for his first major league at-bat. He grounded to third to end the inning, but he returned to the mound with a five-run cushion.

Gilbert worked a quick and clean top of the second with a fly out and two easy groundouts.

Musgrove seemed to stabilize after the first. All he allowed over the next two innings was another leadoff hit to VanMeter in the second, and the Arizona second baseman was erased on a double play.

Gilbert allowed no baserunners in the second or third, notching two more strikeouts.

The top of the fourth was almost a repeat of the first. Gilbert walked Pham, but Frazier hit into another double play. This time, Frazier lined right into first baseman Smith’s glove, so all Smith had to do was step on first to double off Pham. Machado lined out to end the inning.

Musgrove got into a jam again in the fourth but worked out of it. Varsho blooped a hit into the left-center gap and slid into second ahead of the throw. He took third on Ahmed’s broken-bat single. Gilbert bunted Ahmed into scoring position. VanMeter walked, loading the bases, but Marte grounded into a double play to kill the rally.

Gilbert pitched another efficient inning in the fifth: Jake Cronenworth and Aaron Nola flied out. Eric Hosmer hit a 96-MPH liner on the first pitch – right into Gilbert’s glove. Gilbert acknowledged afterward that this was when he realized that he might have something special going.10

Smith opened the home half of the fifth with an infield single; shortstop Cronenworth couldn’t handle the ball but was not charged with an error. Josh Rojas followed with a triple, sliding into third ahead of the throw; Smith scored the Diamondbacks’ sixth run.

Peralta hit a tapper back to the mound – Musgrove looked Rojas back to third and still had time to throw to first for the out. Musgrove struck out the next two batters to leave Rojas at third. At 97 pitches, that ended Musgrove’s outing.

Gilbert needed only 10 pitches for three outs in the sixth. He did have to cover first on a groundout, but the other two were easy outfield flies. By this point, baseball fans around the country were tuning in, as social media alerted them that Gilbert had allowed no hits through six innings.

Matt Strahm took the mound for the Padres in the sixth. Ahmed doubled into the right-field corner. Gilbert was called on again to bunt the runner over. He bunted toward third – Machado bobbled the ball but managed to get the throw off in time for the out at first. VanMeter’s third hit of the game scored Ahmed, bringing the score to 7-0, Diamondbacks. Marte doubled, but Strahm got the next two outs to strand the runners.

Continuing his pattern, Gilbert walked Pham for the third time11 to open the seventh. So far Pham had been the Padres’ only baserunner, although he was erased the first two times on double plays. This time he stayed at first. Frazier, who was leading the NL in hits with 142, hit a screaming low liner between second and third. Third baseman Ellis laid out and caught it for the out. Machado’s popout and Cronenworth’s groundout were much less dramatic.

The Diamondbacks managed to get runners on first and third with two outs in their half of the seventh against Strahm and the Padres’ third pitcher, Miguel Díaz. That brought up Gilbert, who struck out, leaving his batting average as pristine as his ERA.12

By the top of the eighth, the crowd was cheering for the possible no-hitter. The TV cameras showed Gilbert’s family pacing nervously in the stands.13 At 88 pitches to start the eighth, it did not appear that pitch count would prevent him from finishing the game.

Nola hit the first pitch of the eighth to the left-field warning track, but Peralta made a great catch while bouncing off the wall. Hosmer swung at Gilbert’s second pitch and grounded out to short. On the next pitch, Wil Myers flied out to center – giving Gilbert three outs on three pitches!

The crowd roared their approval as Gilbert returned to the dugout to sit by himself while his teammates batted. Díaz set the Diamondbacks down in order in the bottom of the eighth.

Gilbert returned to the mound to the cheers of the crowd, with his place in the history books three outs away. Afterward, he said that he’d been able to tune out the noise through eight innings, but he heard everything in the ninth.14

Trent Grisham looked at an elevated pitch for strike three. Pinch-hitter Ha-Seong Kim also looked at strike three. By now the cheering was continuous – the crowd was standing, cellphones at the ready, hoping to capture history.

Pham – Gilbert’s 28th batter and the only Padre to reach base – wasted no time in ending the game. He swung at the first pitch, sending a sinking liner toward center where Marte made a running catch for the final out.

The hugging, cheering, and congratulations were underway, both on the field and in the stands. Of course Gilbert was “treated” to a blue Gatorade shower as he started his postgame interview. Luckily the headphones still worked after their baptism. Gilbert said that he’d gotten the “debut” butterflies out of the way in his relief appearances. He credited his teammates for fielding several hard-hit balls to preserve his no-hitter.15

Gilbert was the first pitcher to throw a no-hitter in his first start since Bobo Holloman on May 6, 1953.16 In addition to Holloman, two nineteenth-century pitchers threw no-hitters in their first starts.17 He was also the first Diamondbacks pitcher to throw a no-hitter at Chase Field.18 The two previous Diamondbacks no-hitters had been on the road (Edwin Jackson on June 25, 2010, in Tampa and Randy Johnson’s perfect game on May 18, 2004, in Atlanta).

The Padres continued to slump, finishing third in the NL West at 79-83, 28 games behind the Giants. The Diamondbacks had a firm grip on last place, finishing 55 games back. But as a silver lining, on one August day, their fans witnessed history.

In addition to the sources cited in the Notes, the author consulted the Baseball-Reference.com and Retrosheet.org websites for pertinent material and the box scores noted below, and viewed the recorded Diamondbacks TV broadcast on MLB.com.

1 He was charged with the loss, but not an earned run, when he pitched the 10th inning on August 5. The runner on second scored.

2 It was 93 degrees outside. The Diamondbacks were wearing their Saturday black uniforms, so they would have been miserable had the roof been open for this 5:10 start.

4 He had taken batting practice with the team before this game, so the Padres were hoping for his quick return. He returned to the lineup the following night, went 4-for-5, and the Padres won the game, 8-2.

5 Gilbert had made three appearances as a reliever before this start. He pitched 3⅔ innings, collecting five strikeouts. If he had kept that up, he would have achieved a Max Scherzer-esque 12 K/9, but by year-end he had settled at 5.6 K/9.

6 After Musgrove’s April 9 no-hitter, there were no-hitters on April 14 (Carlos Rodón), May 5 (John Means), May 7 (Wade Miley), May 18 (Spencer Turnbull), and May 19 (Corey Kluber). Madison Bumgarner pitched a seven-inning unofficial no-hitter on April 25. The Cubs threw a combined no-hitter on June 24 and the Brewers threw a combined no-hitter on September 11 for a major-league record of nine no-hitters in a year. The sudden drop-off in frequency of no-hitters after May may or may not have been related to MLB’s crackdown on pitchers’ use of sticky substances. “Diamondbacks’ Gilbert Throws No-Hitter in First Career MLB Start,” tsn.ca, August 14, 2021. https://www.tsn.ca/arizona-diamondbacks-tyler-gilbert-no-hitter-san-diego-padres-1.1681818. Retrieved January 30, 2022.

8 Smith replaced Cabrera at first base, moving in from right field. Rojas took over in right field.

11 Pham’s three walks in this game put him into a tie for fourth place in the National League with 62. He finished the year in sixth place with 78.

16 Holloman had also made relief appearances before his no-hitter.

18 There had been a no-hitter in the ballpark. José Jiménez and the St. Louis Cardinals no-hit the Diamondbacks on June 25, 1999, when it was called Bank One Ballpark.